Shameless Plug: If you're at Blogworld Expo 2010 this week, please join me at my talk on Friday afternoon. Details at http://hnsl.mn/blogworldsuckless. If you liked this post, you'll find 32 even more tips for blogging at my talk "32 Ways to Make Your Blog Suck Less."

If you're new to Twitter, do check out my two other articles:

There's a few behaviors about Twitter that are subtle, but important. For some of my examples I'll be making up tweets and timelines to protect the innocent.

Let's start with the most difficult to understand concept. It's obvious once you grok it, but it's a huge point of confusion to a LOT of people, especially new folks.

I wrote that sentence three times and it's still not 100% clear. Here's an example.

I'm @shanselman and I follow @robconery and @haacked. If @robconery tweets this:

@shanselman is the best. I love him so much. Tacos for all!

Rob thinks he's being nice, announcing something to all his Twitter followers. But in fact, Twitter says that a tweet that starts with a @username is not a @mention, it's a @reply.

Only those people who follow @robconery and @shanselman will see that tweet. In other words, the potential audience for that tweet is the intersection of our followers, NOT all of @robconery's followers.

Example: If @haacked follows @robconery, but not @shanselman, that tweet will NOT show up in @haacked's timeline. 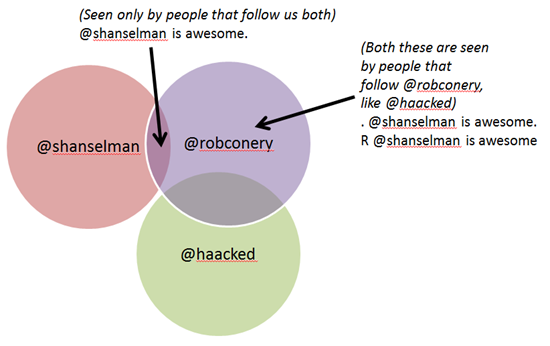 When you want to reply to someone and have everyone see it, add a . or an R, or basically anything in front of their name. That'll make the tweet a @mention of them, rather than a @reply, then everyone in your timeline will see it.

2. Keep the Reply Chain unbroken and reap the benefits

What's the difference between these two tweets?

It doesn't just know that you're replying to @shanselman, but also the status id (the unique number) of the exact tweet. This data is SO useful because it allows you (your twitter client, in fact) to follow the conversation thread as far back as there's data for it. Without that hidden metadata, you're just looking at tweets out of context. 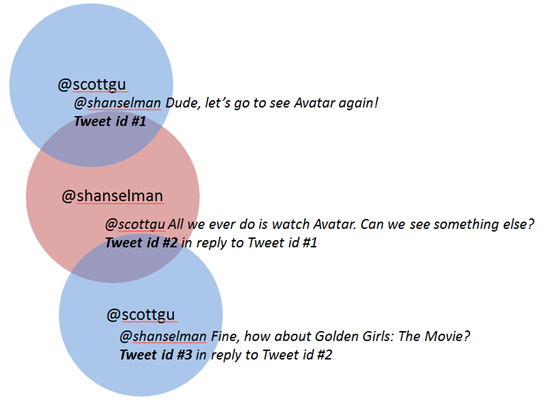 While both tweets are replies, since they start with a @username, only one includes that extra data because I actually clicked "reply" in either my Twitter Client or from the website. It's the act of clicking reply that causes that extra data to be added. If you just start typing a reply or copy paste a user name, your client or the twitter site will likely consider your tweet a fresh tweet.

On the Twitter website, in the New Twitter interface, tweets that have the reply to meta data have a little "conversation bubble" next to the tweet. If you click a tweet with this icon, you'll get the full conversation thread. In this image, two of the tweets are "proper replies," and the other two are "mentions." 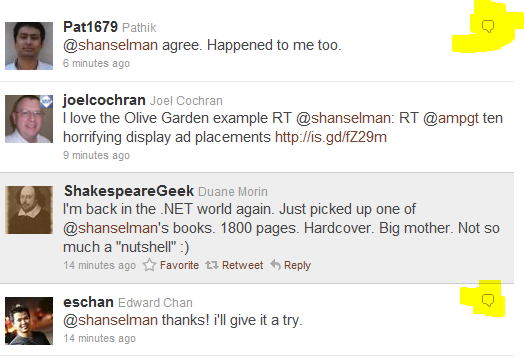 What does this mean for you? Try to keep the reply chain unbroken by using the Reply button in your Twitter client or within the Twitter website. Not only will your followers appreciate it, but you will at some future date when looking back on your tweets and wondering what the heck you were talking about.

3. Know about the advanced features of Url Shorteners

There's a lot of URL shorteners out there like http://bit.ly and now Twitter's http://t.co. One of the most interesting things about Bit.ly is its ability to collect lots of statistics.

But did you know that you can take any bit.ly link, even ones that aren't yours and see their stats? Just add a plus after the URL. Like this crucial piece of breaking news I tweeted last week. "LA Area freeway clogged by burning yam truck." at http://bit.ly/aEu3Gj. You can visit http://bit.ly/aEu3Gj+ (see the plus?) and get all these great stats. 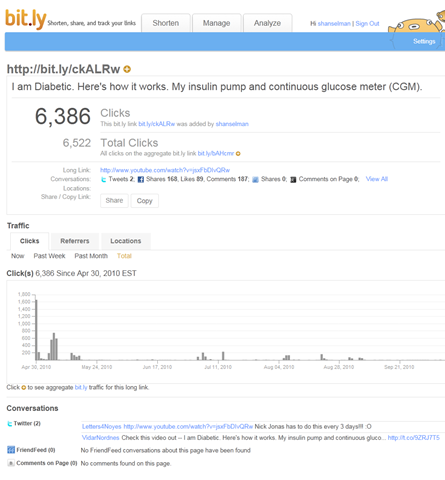 Not only do I get clicks, but I also get aggregate clicks via other bit.ly links pointing to the same URL. There's also a realtime chart at the bottom as well as recent (last week or so) conversations on Twitter that mention the link. Again, the takeaway here is that you can do with this anyone's link, not just yours.

4. Silence your Retweet friendly friends without unfollowing them

Have a friend who retweets WAY to much and fills your timeline with crap, but you still love them and don't want to un-follow? You can remove retweets on a per-user basis from a user's full profile.

For example, if I didn't want retweets from my friend Travis (just an example, he's a lovely guy) then I could visit his profile and silence his noisy RTs (retweets).

Ruben
Latest in my blog 33 Best Posts I Have Read This August, 2010

Ruben Berenguel
October 12, 2010 23:11
Thanks Scott specially for the bit.ly stat tip and the detailed explanation of the other features.

Blog: Subtle but Very Important Twitter Tips and Techniques You Should Know (cause no one… http://goo.gl/fb/N54bP

It will prepopulate:
@shanselman how do I reply so that it not only keeps the conversation history but ALSO allows everyone to see my reply?

Thanks in advance,
Jason

Jason Sirota
October 13, 2010 3:30
Another really helpful post! Some I knew, but just never really worried too much about 'doing it right'. Good reminders, and great info about shrunken link stats - had no idea

alwaysbelearnin.myopenid.com
October 13, 2010 3:32
This is epic. I'm bookmarking this as a tutorial for my friends as they start to get into Twitter. Hell, I'll even send this link to my dad and I'm sure he'll get it. Thanks, Scott!

Enrique Ramirez
October 13, 2010 3:59
@alwaysbelearnin there are many Twitter clients out there (among them, e.g. Echofon or ChromedBird) that display the resolution of a shortened URL as e.g. a tooltip visible when the mouse pointer hovers above the shortened URL.

I didn't know about 1 and 2. Not in that detail.
BTW, what do you think about google's new goo.gl URL shortner?
The QR codes at bit.ly are awesome though :)

Gregor Suttie
October 13, 2010 17:42
Hey @shanselman - very good article with great tips! I am going to tweet this link right now so others can enjoy.

Twittererer
October 14, 2010 9:41
thanks for the tips, actually using twitter because of your video "all devs should have a blog" Twitter Question: I have a friend who tweets about soccer (yes soccer =S) every 10 secs or so! Is there any way I can filter her out without un following her!

Web Page is down

Nicholas Gallicchio
November 05, 2010 15:57
This is great info Scott. I'm writing several tech tips about Twitter and the bit.ly info is excellent to share. Thanks for taking the time to draft and share this.