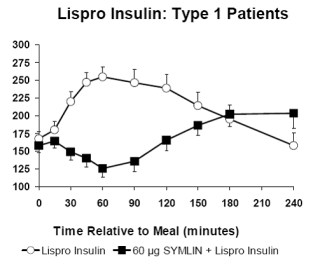 Not only do Type I Diabetics not produce insulin, the hormone that helps takes sugar out of the blood by delivering it to the cells, but we also don't produce amylin, a hormone that controls "gastric emptying." That's the speed that food leaves the gut.

Take a look at the chart to the right. The white line is a diabetic's blood sugar after eating at a buffet and taking insulin. The blood sugar raises dramatically as the diabetic gut digests and empties very fast. The insulin can't react fast enough.

The black line is insulin injected along with Symlin, a synthetic amylin analog.

I just started on Symlin this last week and so far, it's the bomb. I continue to wear the insulin pump to deliver insulin 24-hours a day to my system, but when I eat now I not only program the pump to provide insulin for the meal, but I also take a manual shot. (You can't mix insulin and amylin...yet)

This might sound horrible to you. You have to have a pump AND still take shots? But let me tell you that it's 100% better than having crappy blood sugar. I recently went to the funeral of a friend from high school who was the same age as I, except he'd be diabetic 15 years longer than I. I'd like to stick around as long as I possibly can.

The side effect so far is nausea, because my system hasn't seen amylin in over 10 years, so it's a little surprised. It's like a vegetarian eating meet for the first time in a while; the system reacts and rejects.

Here's some links. Ask your doctor about Symlin if you're a diabetic.

Comment on this post [7]
Share on Twitter or Facebook or use the Permalink
November 28, 2005 6:27
It is the bomb. I'm addicted to Symlin. I've been on it since June, and since I've been on it, no more constant food craving and I've managed to lose 15 pounds.

I've blogged quite a bit about it.

Do be careful, and keep a good eye on blood sugars, I've had two random hypos on it, 20 minutes after eating -- mostly because we were playing around with it and injecting 30 minutes before meals. I no longer do that.

Steven Wilcox
December 13, 2005 23:09
Wow. I read a lot of diabetes blogs and somehow managed to never hear about Amlyin. Thanks for the heads up.

David Edelman
January 21, 2006 3:13
Fantastic blog. Found out some stuff I never knew. You are definitely on the cutting edge of diabetic patient knowledge.

After reading your posts I didn't see you mention any issues with your thyroid. Many diabetics have underactive thyroids, which can sometimes explain weight gain issues. You might want to consider getting a TSH (blood) test at your next checkup.

Also many type I diabetics go on Lisinopril after being a diabetic for awhile and/or reach middle age. Safeguard especially for future heart problems.

My son, Kyle, was diagnosed Type 1 about 35 days ago. We are heading to his 2nd follow up appointment at the Barbara Davis Center for Diabetes here in Denver, CO. Any words of wisdom on how to broach this with the doc?