The ASP.NET Interns ship their project - A basic blog template for .NET Core 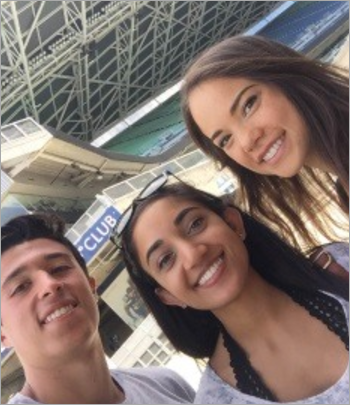 The Visual Studio Tools team had some great interns this summer. Juliet Daniel, Lucas Isaza, and Uma Lakshminarayan have been working all summer and one of their projects was to make something significant with ASP.NET Core and .NET Core. They decided to write a blog template. This is interesting as none of them had written C# or .NET before. Python, C, JavaScript, but not C#. This was a good exercise for them to not only learn C#/.NET but also give the team real feedback on the entire process. The ASP.NET Community Standup had the interns on the show to give us a walkthrough of their process and what they thought of VS.

They did their work over at https://github.com/VenusInterns/BlogTemplate so I'd encourage you to star their repository...and maybe get involved! This is a great starter application to explore ASP.NET and possibly do a pull request (make sure to give them a heads up in an issue before refactoring/changing everything ;) ) and contribute.

The interns used ASP.NET Core's new Razor Pages as well. Razor Pages sits on (is just) MVC so while it might initially look unfamiliar, remember that it's all still using the ASP.NET Core "MVC" pattern under the hood.

When you install the  .NET Core SDK you'll get a bunch of standard templates so you can:

There are lots of 3rd party and community templates and the beginnings of a website to search them. I expect this to be more formal and move into docs.microsoft.com in time.

The interns made "dotnet new blog" where blog is the short name of their template. They haven't yet released their template into NuGet for folks to easily install "dotnet new -I blogtemplate.whatever," For now you'll need to clone their repo as if you were developing a template yourself. It's actually a decent way for you to learn how to make templates.

And here's my nice local new blog. It's got admin, login, comments, the basics.

At this point you're running a blog. You'll see there is a Solution in there and a project, and because it's a template rather than a packaged project, you can open it up in Visual Studio Code and start making changes. This is an important point. This is an "instance" that you've created. At this point you're on your own. You can expand it, update it, because it's yours. Perhaps that's a good idea, perhaps not. Depends on your goals, but the intern's goal was to better understand the "dotnet new" functionality while making something real.

Here's some of the features the interns used, in their words.

I wouldn't say it's perfect or even production ready, but it's a great 0.1 start for the interns and an interesting codebase to read and improve!

Here's some ideas if you want a learning exercise!

Ivan Bondy
September 15, 2017 5:24
The blog is built on Razor Pages from ASP.NET Core. Because of this, developers with some knowledge of ASP.NET Core can learn about the pros and cons of building with Razor Pages as opposed to the previously established MVC schema.

Hmm...I just wonder so what is the pros and cons feedback from them?

XRLim
September 21, 2017 0:48
Thanks for the post, Scott! It's awesome to see all these great responses and new issues opened in the GitHub repo. Looking forward to seeing where our blog template goes and how people use it!

Juliet Daniel
September 28, 2017 18:42
Great initiative. Thanks for the post. Something to add: Live Writer support.