The Elder Scrolls - emulated in a Dos Box 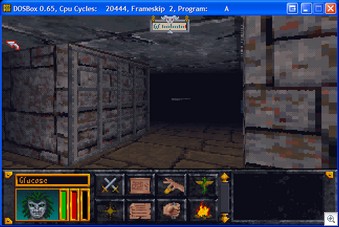 The Elder Scrolls IV - Oblivion is amazing. Buy it. This is the game that the Xbox 360 was made for. This is the Halo 2 launch game that the 360 was missing. It's hardcore enough for the RPG-familar, and casual enough for my wife and I who play thirty minutes at a time. That's my review. There's nothing more to be said.

Ah, but the originals. The original Elder Scrolls - Arena is available for free download on the 10th anniversary side.

However, Window's DOS Support, particularly its extended memory support, leaves something to be desired, so you can (have to) download a DOS Emulator.

"DOSBox emulates an Intel x86 PC, complete with sound, graphics, mouse, modem, etc., necessary for running many old DOS games that simply cannot be run on modern PCs and operating systems, such as Microsoft Windows 2000, Windows XP, Linux and FreeBSD. However, it is not restricted to running only games. In theory, any DOS application should run in DOSBox, but the emphasis has been on getting DOS games to run smoothly, which means that communication, networking and printer support are still in early developement."

In order to get Arena running on my Home PC I needed to change the following values in my DOSBox.conf file:

core=dynamic
frameskip=2
cycles=20000 #YMMV, so use CTRL-F12 to find the right value for you
output=opengl

You'll also need to "mount" your ARENA folder in DOSBox when running:

Very slick, the emulator maps/emulates a SoundBlaster! Ah, SET BLASTER=A220 I7 D1 H5 T6, we hardly knew ye. It's so funny, though, how we remember the graphics being SO awesome at the time...gaming now and then...

Comment on this post [5]
Share on Twitter or Facebook or use the Permalink
April 13, 2006 12:52
The graphics now are amazing - but its hard to say the gameplay has improved by the same magnitude (aguably, at all). Its interesting that page shows Punch Out and Fight Night side-by-side, as thats the running example I've been using to make this point. Fight Night looks amazing. There have been many good looking, realistic boxing games over the years. But has there ever been a boxing game more "fun" to play that Punch Out? Has any other boxing game reached anywhere near its popularity?

Joshua Flanagan
April 13, 2006 14:57
Ahh the good ol' days when games were "real" games. I wasted so many hours playing Arena and I've bought every Elders Scrolls since (Daggerfall, Morrowind, Oblivion). However, what really kills me now is that Oblivion is such a memory hog that my machine crashes out in the intro screen even with all the settings minimized (I have 512Mb and 2.4ghz with a 256Mb GeForce and STILL!!!). As soon as I can afford it, I'm going to get myself a new system but until them, I'll have to keep reading the manual. :-)

Sushant Bhatia
April 13, 2006 16:26
I have used DOSBox to play games like "Life or Death 2: The Brain" but I haven't ever tried it on any of the more advanced DOS games. I have been a big fan of the Elder Scrolls Series since Arena, but Daggerfall was by far my favorite. I even have a dedicated Pentium III machine that is only used for playing Daggerfall (with DOS 6.22). Has anyone had any luck running Daggerfall in DOSBox?

Aaron Prenot
April 13, 2006 17:43
Aaron - there's a list of compatible games and settings on how to get them working up on the DosBox site.

Scott
April 13, 2006 18:53
Even though I have my kick-butt-jaw-dropping oblivion loaded up on the 360 (I still haven't even explored a tenth of the world) I still love firing up my dosbox emulator and playing the old games. Along with Elder Scrolls I happily play the original Railroad Tycoon, Race into Space (now open source!), and the old SSI AD&D games all the time. Nothing like playing 80s graphics on the plane while everyone is maxing out their video cards with the latest eye candy.