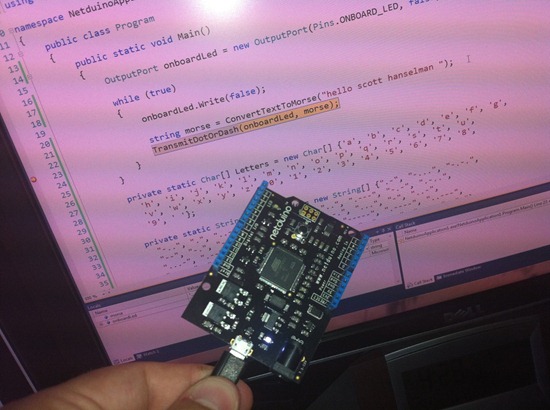 Benjamin Schröter
September 08, 2010 8:55
I believe building robots will be much easier now.

Prashant
September 08, 2010 9:45
Looks nice (although I gave up using Microsoft software the same moment I bought my MacBook). For tiny programming, I prefer carrying around my Ben NanoNote: A linux (OpenWRT from the box, can boot Debian) powered palmtop computer. Or handheld, whatever you prefer... Sadly, it has no connection power (no wifi, networking only via a USB connection to a host computer acting as proxy). But it is one of the cutest pieces of hardware I have ever since, although I use it for mostly nothing these days :/

Ruben Berenguel
September 08, 2010 17:53
@Benjamin: No. The entire string printed by that routine is a single letter in plain text. The delay goes after all the dots and dash are sent.

https://www.google.com/accounts/o8/id?id=AItOawnRt0ysUHzQrAwFjR8Sz3qEI5uTTvOU84M
September 08, 2010 19:53
At first I thought it was just doing I/O from your PC to this card... then I realised the code actually runs on the card! Nice.

https://www.google.com/accounts/o8/id?id=AItOawkqRiiadq8ZbR61I2KoN80aXp-a6qAH2ro
September 08, 2010 19:56
That last comment from me. Just ditch Google from the OpenID list for the time being - it's useless.

Scott Hanselman
September 08, 2010 20:46
Scott, great article! BTW, your VS font caught my eye when reading the article. Can you share the name? Thx!

Scott Hanselman
September 09, 2010 0:14
Gee - I always wondered what the SPOT watches ran. I have two of them - one still running on my wrist every day. IIRC, those watches came out before the MF was announced - or right about the same time.

CarlD
September 09, 2010 3:21
The Netduino is really pretty slick. And it's hardware compatible with the majority of the Arduino shields out there. And, with a bit of work, you can usually port a fair bit of the Arduino code to C# too.

Eric
September 10, 2010 2:39
Article was very timely. I had ordered my netduino for play 15 minuts before checking on this blog post! I will definitely use Scott's code as something else to play with until I get some components!

https://www.google.com/accounts/o8/id?id=AItOawmr_7i_rvQ4XdbL7C5F4KZbZxlaeXoYvH0
September 11, 2010 23:56
I wish there was support for the Propeller from Parallax.com.
Would like to see the TPL ported to MF for that one :)

https://www.google.com/accounts/o8/id?id=AItOawkG414T2WP1DRDgd7uc7VH5sWuw2QpWc2k
September 13, 2010 10:13
Interesting. Always been curious about low level code, all these years dealing with SQL express, vba etc and most of us can barely get an led to flash. Imagine the possibilities, tweet a special code and feed your fish from 1000 miles away. Awesome.

https://www.google.com/accounts/o8/id?id=AItOawnKJ5hTADewdh-vLO7_1oz4m6jZDaz_vYM
September 13, 2010 21:59
Yes, no dictionary or IList that I could find. Version 4.1 added a hashtable, but this seemed easier.