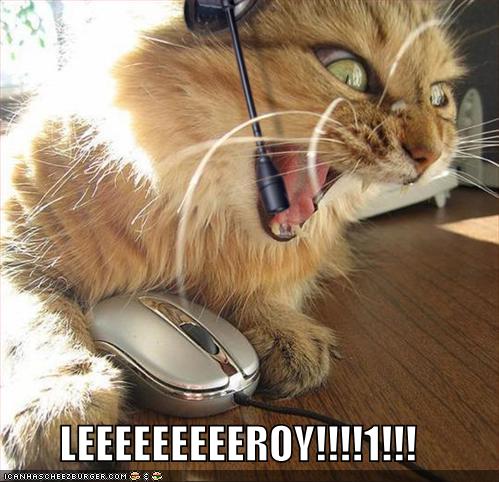 During my Friday Keynote at the PNPSummit I did a silly 30 minute PowerPoint that ended with some LOLCats and a few examples of LOLCode. If you're not familiar with LOLCats, they are basically silly pictures of cats that speak a l33tspeak-like language, like IM IN UR BASE KILLIN YUR D00DS.

This language has turned into a Programming Language called LOLCode for which there are already at least TWO .NET implementations. The first implementation of LOLCode.NET is up on Google Code and is by Nick Johnson.

During my talk, unbeknownst to me, literally that minute John Lam was uploading the DLR team's own implementation of LOLCode implemented from scratch on the DLR. The amazing Martin Maly of the DLR team implemented LOLCode on his plane ride to Spain for presentation at TechEd.

I invited John up on stage spontaneously to give a demo of LOLCode and he did...he showed a Fibonacci implementation.

This is great code to read for two reasons. It's two completely separate implementations of the same general idea - an LOLCode compiler. However, they are implemented completely differently. Of course, the DLR team images this as a Dynamic Language so their implementation is a great primer on how to make your own language on the DLR.

In order to get the DLR Team's implementation running on your own machine, you need to do the following: 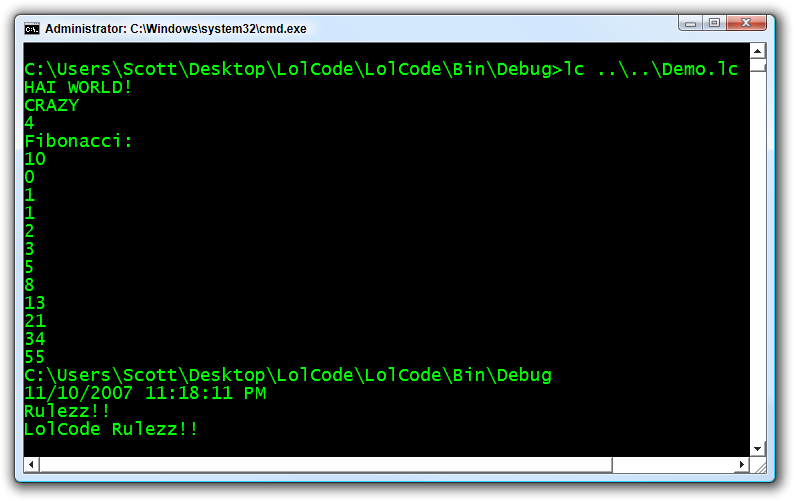 Enjoy! If you don't think this is fun, go play with the MVC Demo Source Code from DevConnections and the PNPSummit.

implemented LOLCode on his plane ride to Spain

I know LOLCode is a fairly simple language, but that's still impressive!

Cameron
November 12, 2007 21:55
I think the cat's yelling at Leroy Jenkins, not worrying about whether Taimak's got the glow on him or whose Converse it'll have to kiss.
When cultural ephemera clash, everybody wins.

Dave Solomon
November 12, 2007 23:05
Scott, thanks for the LOLCODE mention. Martin Maly has contributed further details on behind the scenes implementation details at the LOLCODE site.

lolcats and fibonacci, not sure what to say to that, but thanks for posting something to make me laugh!

jonathan parker
November 17, 2007 12:08
This is great work. Not wanting Mac and Linux users to be left behind, I've written an article about running the DLR Edition of LOLCODE on Mono...