I've blogged about the importance of the LED Moment. You know, that moment when you get it to blink.

Ben Eater is a bit of an internet legend. His site at https://eater.net has a shop and YouTube videos where he's creating educational videos showing low level (and some what historical) computing.

He's known for "building an 8-bit CPU from scratch."

This tutorial walks through building a fully programmable 8-bit computer from simple logic gates on breadboards. 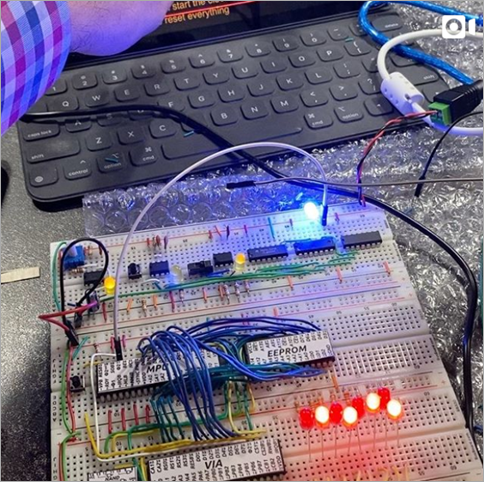 Simple logic gates? Yep, like && and || and 7400 series chips and what not. I learned on these 25 years ago in college and I sucked at it. I think I ended up making A CLOCK. Ben makes A COMPUTER.

This Christmas my gift to myself was to learn to build a 6502 computer (that's the processor that powered the Apple ][, the NES, the C64, the BBC Micro and more - it's literally the processor of my entire childhood). Ben has made the videos available free on YouTube and the parts list can be sourced however you'd like, but I chose to get mine directly from Ben as he's done all the work of putting the chips and wires in a box. I got the 6502 Computer Kit, the Clock Module Kit, and an EEPROM Programmer. I also ordered a Quimat 2.4" TFT Digital Oscilloscope Kit which is AMAZING for the value. Later I ordered a Pokit Oscilloscope that will use my phone for the screen.

I'm about halfway through the videos. There are 4 videos of about 1 hour each, but I've been following along and pausing. Ben will wire something up and speed up the video, so each 1 hour video has taken me about 4-5 hours of actual time, as I'm cutting and stripping wires manually and trying to get my board to look and behave like Ben's in the video. More importantly, I made the promise to myself that I'd not continue if I didn't understand (mostly) what was happening AND I wouldn't continue if my board didn't actually work.

At the middle-end of Video 2, we're hooking up a newly flashed EEPROM that has our computer program on it. This isn't even at Assembly Language yet - we're writing the actual Hex Codes of the processor instructions into a 32768 byte long binary file and then flashing the result to an EEPROM and reseating it each time.

I'd respectfully ask that you follow me on Instragram as I'm documenting my experience in photos.

A few days ago I was manually stepping (one clock pulse at a time) through some code and I kept getting "B2" - and by "getting" that value, I mean that quite literally there are 8 blue wires coming off the data line (8 pins) on an EEPROM and they are going to turn 8 LEDs on or off. I wanted to get the number "AA."

What. I'm getting B2, I want AA. I have no idea. Do I pull it apart and redo the whole board? How many hours ago did I make a mistake? 3? 7? I was sad and dejected.

I had swapped two of the wires going from the EEPROM to the Processor. I was getting exactly what I asked for. I swapped to wires/pins so the bins were swapped.

I wasn't groking it until I stopped a thought and looked from multiple angles. What am I doing? What's my goal? What is physically happening here? What abstractions have I added? (even voltage -> binary -> hex is three abstractions!)

It seems a small and stupid thing. Perhaps you, Dear Reader, immediately knew what I had done wrong and were shouting it at this blog post 3 paragraphs ago. Perhaps you've never spent 13 hours debugging a Carriage Return.

But I didn't understand. And then I did. And I swapped two wires and it worked, dammit. Here is a video of it working, in fact.

I feel like NOW, today, I'm ready to go to college and fix my B in Electronics Class.

Youth is wasted on the young, my friends. What have YOU been learning lately?