Sometimes there's little victories, tiny victories that make me happy. It's a big*ss company, Microsoft is, and sometimes it's hard to get stuff done. But sometimes I get something small done that might make a larger difference.

Remember SmallestDotNet.com (blog post) from August? Well, that kicked off a number of discussions about how it was hard to find and install the .NET Framework. It was hard for end users and it was hard for developers to get it.

We put together to small "swat teams" and fixed two small things.

First, the brouchureware. The site http://www.microsoft.com/net/ has a nice URL, non-threatening clipart dude, and some marketing stuff, but had no way to get the .NET Framework it was talking about. Now it also has an unambiguous button that links directly to the small 2.6 meg .NET Framework bootstrapper. Directly. No download interstitial page. Magical. Duh. 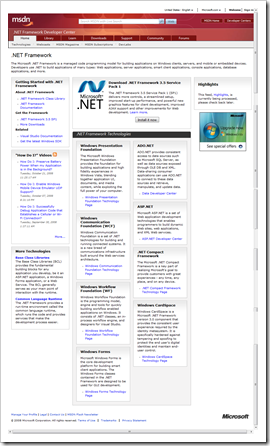 Second, the .NET Framework page on MSDN. It's at http://msdn.microsoft.com/en-us/netframework, is linked to all over and gets a lot of traffic.

However, when you visited it before it had a bunch of generated links like "Popular Downloads" that were either old or stupid and would point folks to .NET 2.0 redists that were old. It was hard to find nearly everything.

We redesigned it to include (as above) a giant and unambiguous Install It Now button. However, if you click More Info you get a nice list of other versions to download. Madness!

I say some of this with some slight sarcasm because I've learned that there are tens of thousands of pages out there in Microsoft-world and like any garden, you'd be surprised that some sections just aren't tended to as often as they should. Pages that you look at all the time might not be looked at as often as they should from the inside.

It also includes a link to the Full Package just under the link to the bootstrapper. It's generally a lot tidier, IMHO. There's also some talk about taking my SmallestDotNet.com detection code, or code like it, and putting it on these sites to make everything as easy as possible.

I believe there's talk of tending to a lot of these gardens in the coming months and I'm hoping to stick my nose in get involved with those layouts as well.

Anyway, this was a tiny victory and it made me smile. I hope it helps you, as there were a lot of people involved in what appears to be small changes.

Jason Mauer
November 04, 2008 5:44
Great choices! I'm glad that these small changes have been taken as important and that the leadership at Microsoft gets it at least at some level. Making things easy will make user experience 1000% better. Adobe, a competitor they may have heard of, gets it with their Adobe Flash, Reader and Air download links prominently displayed on many pages.

"It is simple to be difficult but it very difficult to be simple ".

http://adeelalvi.blogspot.com/
November 04, 2008 6:26
Great post. I've wondered for years why a link to the .NET framework wasn't easier to find, especially when trying to direct Joe-IT guy to find it. Problem solved.

jwalkerjr
November 04, 2008 6:40
Silver bullets and quantum leaps are rare, you'll get farther ahead if you look to accumulate lots of tiny victories than if you try to look for that one big thing that'll make up for falling down in the details.

Tiny victories stack, they multiply like compound interest. This is true for usability, performance, and for features.

http://boersnoes.myopenid.com/
November 04, 2008 9:29
Hey Scott, what ever happened to the .NET Framework being installed / updated to 3.5SP1 automatically through Windows Update? Is that still going ahead this month?

Even better than clicking a single button to install, is having it installed on users' machines already :-)

It's another victory for Common sense and Simplicity

Thomas
November 04, 2008 14:59
Good Job! Always love to see a step taken in the right direction, regardless of the size of said step.

http://jeff.sheldon.myopenid.com/
November 04, 2008 15:33
It may seem small, but that's an awesome achievement Scott! Sadly I know too many people who just rely on Windows Updates to get the .NET installers and that's it.

http://rumandcode.wordpress.com/
November 04, 2008 18:17
It'll be coming down soon, but they want to get that update to 3.5SP1 ready first so that the version on Windows Update is the latest.

Is there a list anywhere detailing what's going to be fixed in the update? There was a bug introduced in SP1 that caused the datset visualizer to only display red exclamation marks, so really hoping a fix for this is included in the upcoming update.

Dan
November 05, 2008 15:34
It would be nice to have an advanced feature where you can select which version to install. If I don't have any framework installed i could choose to install 2.0 instead of the latest one. If I don't go through the advanced section then it installs the latest one.

jstawski
November 05, 2008 16:52
Great work on solving one of Microsoft's most annoying problems, at least in your own area of the company.

Eric
November 05, 2008 19:57
Congrats Scott. I read an article a while ago about Bill Gates and what he did at Microsoft in recent years. I think it was in his big farewell interview. Frankly a lot of what he did is what you are doing now. Sticking your nose into stuff when it isn't right and helping to make it better. I think you and some of the other guys at Microsoft who blog and sit on the outside have the ability to push Microsoft to fix these issues. In the end even with all of its problems Microsoft is a great company and people like you are helping it fix a lot of its issues. Great Job!

Ben
November 07, 2008 7:06
It would be very assome if .net was downloaded on demand from microsoft. The installation would be just an empty framework and would only download the each library on demand. Plus if programmers had a way to deploy the same way. Just one of the nice to haves that I would love microsoft deploy

http://openid.aol.com/DMAMBROSE1970
November 22, 2008 22:47
Great work on smallest .NET, Scott! For your next uphill battle, how about getting Microsoft to publish the smallest possible VPC images of XP and Vista? It would be a huge help for all of us building software for the Windows OS if we didn't have to roll our own VPC images.