I was on the ASP.NET Community Standup this morning and Jon mentioned a new tool for load testing called "Netling." This got me to thinking about simple lightweight load testing in general. I've used large enterprise systems like SilkTest  as well as the cloud based load testing tools like those in Azure and Visual Studio. I've also used command-line tools like WCAT, an old but very competent load testing tool.

I thought I'd take a moment and look at two tools run locally. The goal is to see how easily I can do quick load tests and iterate on the results.

Netling is by Tore Lervik and is a nice little load tester client for easy and quick web testing. It's open source and on GitHub which is always nice. It's fun to read other people's code.

Netling includes both a WPF and Console client and is cleanly factored with a Core project that does all the work. With the WPF version you do test and then optionally mark that test as a baseline. Then you can make small changes as you like and do a quick retest. You'll get red (bad) or green (good) results if things get better. This should probably be adjusted to ensure it is visible for those with red-green color blindness. Regardless, it's a nice clean UI and definitely something you'll want to throw into your utilities folder and call upon often!

Do remember that it's not really nice to do load testing on web servers that you don't own, so be kind.

Note that for now there are no formal "releases" so you'll need to clone the repo and build the app. Fortunately it builds very cleanly with the free version of Visual Studio Community 2015. 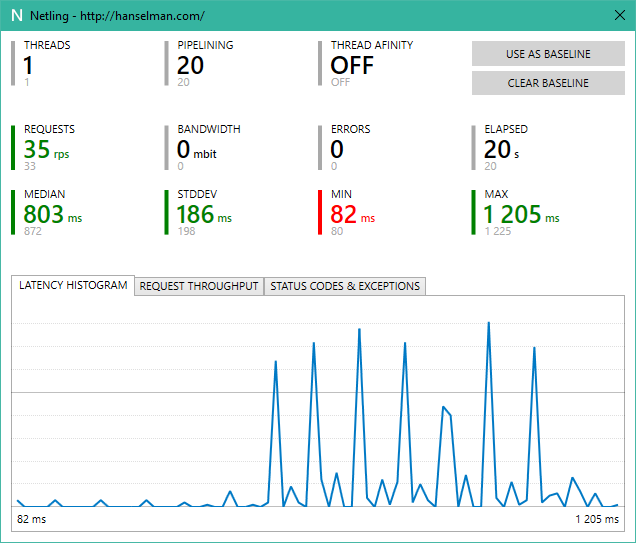 The Netling console client is also notable for its cool ASCII charts.

I'm sure that Tore would appreciate the help so head over to https://github.com/hallatore/Netling and file some issues but more importantly, perhaps chat with him and offer a pull request?

WebSurge is a more fully featured tool created by Rick Strahl. Rick is known in .NET spaces for his excellent blog. WebSurge is a quick free download for personal use but you should register it and talk to Rick if you plan on using it commercially or a lot as an individual.

WebSurge also speaks the language of the Fiddler Web Debugging Proxy so you can record and playback web traffic and generate somewhat sophisticated load testing scenarios. The session files are just test files that you can put in source control and share with other members of your team.

I realize there's LOT of choices out there.  These are just two really quick and easy tools that you can use as a developer to easily create HTTP requests and then play back at will and iterate during the development process.

What do YOU use for load testing and iterating on performance during development? Let us all know in the comments.

Sponsor: Big thanks to Redgate for sponsoring the feed this week. Could you deploy 1,000 databases? Imagine working in a 70-strong IT team, with 91 applications and 1,000+ databases. Now imagine deployment time. It’s not fiction, it’s fact. Read FlexiGroup's story.

Comment on this post [21]
Share on Twitter or Facebook or use the Permalink
August 10, 2016 1:11
Damian showed Netling in NDC Sydney. Was really nice to see such a handy tool. Of course there are CLI tools around already but this one is really handy and easy to quickly start with.

Kiran
August 10, 2016 4:23
We go all in with VSTS and Azure for load testing and perf analytics. Gives good integration in the lifecycle. http://clemensreijnen.nl/post/2016/06/15/Load-and-Performance-monitoring-and-analyzing-with-VSTS-and-Azure

clemens reijnen
August 10, 2016 6:19
Thanks for introducing these tools, will explore them soon.

Abdul Rauf
August 10, 2016 8:13
In the article when you say this "I'm sure that Tore would appreciate the help so head over to https://github.com/hallatore/Netling and file some issues but more importantly, perhaps chat with him and offer a pull request?"

I'm confused - new to Git guy, hating it that all the GUI tools are deficient in some way - pull means updating your repo from some other repo, for me this has typically been pulling from origin/develop during working on a new version. So surely this should say "offer a push" if you are contributing code?

It's a "Pull Request". You are requesting him to pull your changes so he can look at them.

Andrew Murphy
August 10, 2016 10:20
Scott: One major part of Netling is it's performance. It will give Kestrel a run for it's money on localhost while using little CPU itself.

That's also why it works well for localhost testing, since it uses little CPU compared to others I've tested.

Sam Judson
August 10, 2016 12:44
Sam Judson: I was using Gatling when I created Netling. So the name is somewhat releated, but they are very different. (Gatling does more, more features etc. But it also takes more time to set up and uses more cpu)

that's usually the stumbling block for me with these sorts of tools.

Mike J
August 10, 2016 17:25
Mike J: Forms auth just adds a cookie. Get this cookie from chrome for example and add it to the netling code that you compile yourself. That's the easiest way to get this working.

Another good option for dev and QA is Loadster - https://www.loadsterperformance.com/
There is a free and paid version, very good reports that can be shared with clients.

Richard Friedman
August 16, 2016 2:10
Thanks you introduce these tools.
I wonder how come i work in .NET 10+ years,but never found these tools and stay on Fiddler or something like JMeter.

Ming
August 16, 2016 12:04
Thanks for sharing this post. It's really great piece of information as we were only using Fiddler for this purpose. Never knew these tools exists.

DotNetCrunch
August 17, 2016 13:42
StresStimulus is a load testing Fiddler add-on and a standalone tool. It replays captured or composed traffic with multiple users, and monitors Windows performance counters. Its forte is testing thought applications like Dynamics CRM and NAV. 250 emulated users are free.

Vadim Kleyzit
September 02, 2016 0:35
I'm confused - new to Git guy, hating it that all the GUI tools are deficient in some way - pull means updating your repo from some other pokevolver repo, for me this has typically been pulling from origin/develop during working on a new version.