Upgrading the Storage Pool, Drives, and File System in a Synology to Btrfs 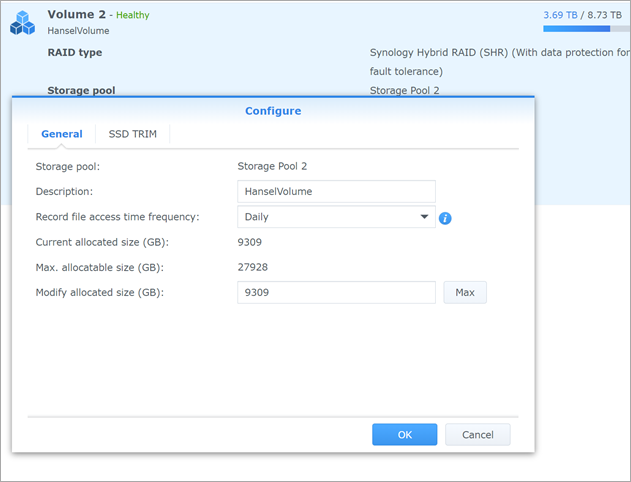 I have blogged about the joy of having a home server over these last nearly 10 years in a number of posts.

That migration to the new Synology is complete, and I used the existing 2TB Seagate drives from before. These were Seagate 2TB Barracudas which are quite affordable. They aren't NAS rated though, and I'm starting to generate a LOT of video since working from home. I've also recently setup Synology Active Backup on the machines in the house, so everyone's system is imaged weekly, plus I've got our G-Suite accounts backed up locally.

REFERRAL LINKS: I use Amazon links in posts like this. When you use them, you're supporting this blog, my writing, and helping pay for hosting. Thanks!

I wanted to get reliable large drives that are also NAS-rated (vibration and duty cycle) and the sweet spot right for LARGE drives now is a 10TB Seagate IronWolf NAS drive. You can also get 4TB drives for under $100! I'm "running a business" here so I'm going to deduct these drives and make the investment so I got 4 drives. I could have also got two 18TBs, or three 12TBs to similar effect. These drives will be added to the pool and become a RAID'ed roughly 21TB.

My Synology was running the ext4 file system on Volume1, so the process to migrate two all new drives and an all new file system was very manual, but very possible:

The wholes process took a few days with checkpoints in between. Be ready to have a plan, go slow, and execute on that plan, checking in as the file system consistency checks itself.

To be clear, another way would have been to copy EVERYTHING off to a single external drive, torch the whole Synology install, install the new drives, and copy back to the new install. There would have been a momentary risk there, with the single external holding everything. It's up to you, depending on your definitions of "easy" and "hassle." My way was somewhat tedious, but relatively risk free. Net net - it worked. Consider what works for you before you do anything drastic. Make a LOT OF BACKUPS. Practice the Backup Rule of Three.

Note you CAN remove all but one drive from a Synology as the "OS" seems to be mirrored on each drive. However, your apps are almost always on /volume1/@apps

Some Synology devices have 10Gbs connectors, but the one I have has 4x1Gbs. Next, I'll Link Aggregate those 4 ports, and with a 10Gbps desktop network card be cable to at get 300-400MB/s disk access between my main Desktop and the NAS.

The Seagate drives have worked great so far. My only criticism is that the drives are somewhat louder (clickier) than their Western Digital counterparts. This isn't a problem as the NAS is in a closet, but I suspect I'd notice the sound if I had 4 or 5 drives going full speed with the NAS sitting on my desk.

Here are my other Synology posts:

John R
October 19, 2020 1:33
By moving the drives over, I kept the complete config exactly as is. If I ran two, as you said, that’s totally valid but I’d need to set up the second synology from scratch. As mentioned in the post, it really depends on how much config and existing stuff you have and your tolerance for setup. Both ways work!

I've been looking at that exact model for downsizing my home server, but I'm not sure if Plex will run as smoothly. (And details about HW transcoding are all over the place)

Ah ok, makes sense. I guess I'm more in the camp of "had it for 10 years, it's probably time for a fresh start to clear out all the cruft".

John R
October 19, 2020 15:43
4 aggregated 1Gbps links are not the same as one 4Gbps link. I.e. to the best of my knowledge, you won't get 400MBps while transferring a single file. From what I recall, a single tcp connection is not multiplexed. What seems to be happening is that tcp connections get assigned to links based on some combination of src/dst ip addresses and port numbers.

Michał Sykutera
October 23, 2020 7:04
Hi there! I know this is somewhat off topic but I was wondering if you knew where I could locate a captcha plugin for my comment form?
I'm using the same blog platform as yours and I'm having trouble finding one?
Thanks a lot! Frankrig trøje

Frankrig trøje
October 24, 2020 16:06
Can I simply say what a relief to uncover somebody who truly knows what they're talking about on the web.

You actually understand how to bring a problem to light and make
it important. More and more people really need to
read this and understand this side of your story.
I can't believe you are not more popular since
you definitely have the gift. Jalkapallo pelipaita

Jalkapallo pelipaita
November 05, 2020 5:01
Thanks for your information, you have given very useful and important information.Best Choice