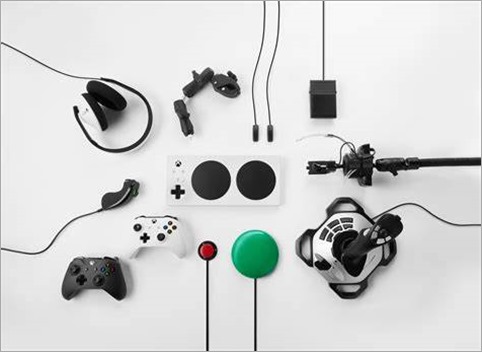 Thanks for the kind words on my post earlier this week. Lots of great tips both in the comments and were sent to me privately. I'm still alternating meds, struggling at physical therapy every day, but I'm fortunate to have my wife (a medical/surgical nurse) here to tell me when it's supposed to hurt and when it's not.

That said, BEFORE the pain started I had a nerve block in my neck and my right side was basically "turned off" for a week. It's definitely preferable to the current pain situation but one of the bright spots is that it give me extreme compassion for those who are missing or unable to use one or more limbs.

I was hoping to use some of my convalescent time to play Xbox but I quickly discovered that it's VERY hard to play a FPS (first-person shooter) with one hand. Of course, tell an engineer that they can't do something and they'll just take it as a challenge, right?

I happened to have an Xbox Adaptive Controller (I bought a few just in case I wanted to set up some relatives or new friends who might need one, never realizing it would be me that needed one) so I hooked it up and tried to figure out how I could game given my paralyzed arm and a lot of free time.

The easiest and clearest way I can example the Xbox Adaptive Controller this - It's an Xbox Controller that pairs and talks to an Xbox like any other controller...but it's not a controller.

It has headphone jacks - just 1/8" standard jacks - for every possible input, along with USB ports for Joysticks. You build - adapt - a controller that's ideal for you! It's magical.

Then, combine it with built in Xbox software called Copilot and you can link two controllers so that two can play as one. I was able to use an a standard Xbox Controller in my left hand while using the Xbox Adaptive Controller with my feet. Within an hour I was playing Call of Duty quite competently, I might say.

I even recorded it and put it in my YouTube so I have proof that I got at least one shot in during this round, LOL.

Go learn all about it, the Xbox Adaptive Controller is an extraordinary advice. Then go set it up for a friend or family member, they'll appreciate it very much.

Please take a moment to explore and subscribe to my YouTube. I'm nearing 100k subscribers there and I was told there would be snacks.