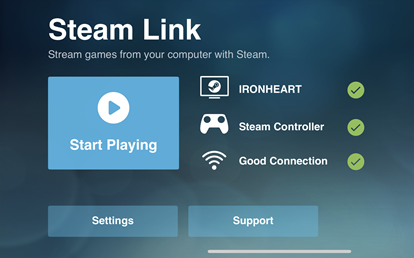 I think that we, as an industry, are still figuring game streaming out. It's challenging to find that sweet spot between quality and frames per second, all while respecting the speed of light and the laws of physics.

That said, if you have a a rock solid 5Ghz wireless network, or better yet, a solid wired network, you can do some pretty cool stuff today.

You can use the Xbox app on Windows 10 to stream from your Xbox One to your PC. I use this to play on my Xbox while I walk on my treadmill in my garage. Works great even on my comparatively underpowered Surface Pro 3.

You can also do the opposite if you have a powerful PC. You can run the Xbox Wireless Display app and remote your PC to your Xbox.

I also have a Steam Link - it's odd to me that they discontinued this great little device - that I use to stream from my PC to my big TV. However, if you have a Raspberry Pi 3 or 3B+ running Stretch, you can try a beta of Steam Link and effectively make your own little Steam Link dedicated device. Bonus points if you 3D Print a replica case to make it look like a Steam Link.

Today, however, Steam Link was released (after a rejection) to the Apple iOS App store so I had to try this out from my iPhone XS Max. I also have a Steam Controller, which, while weird (i.e. it's not an Xbox Controller) is the most configurable controller ever and it can emulate a mouse pretty well when needed. They released a new Firmware for the Steam Controller that enabled BLE support which allows it to be used as an MFi controller on an iOS device. You do need to memorize or write down the incantations to switch between original RF mode and BLE mode, though.

Aside: MFi is almost criminally neglected and a Apple has utterly dropped the ball and missed an opportunity to REALLY make iOS devices more than casual gaming devices. Only in the last few years have decent MFi Controllers been released and game support is still embarrassingly spotty. I've used my now-discontinued SteelSeries Stratus a handful of times.

You install the app, pair your controller with your iOS device/phone/tablet, then test your network. I'm using an Amplifi Mesh Network so I can control how my devices connect to the network, I can manage band selection, as well as Quality of Service (QoS) so I didn't have any trouble getting 55 Mb/s from my wired computer to my wireless iPhone.

The quality is up and down as it appears they are focused on maintaining a high framerate. Here's a captured local video of me playing Batman from my high end rig streaming to Steam Link on my iPhone.

Here’s a better quality video with the iPhone at full power and connect to 5ghz using Steam Link pic.twitter.com/N2UZ0P2G4n

What has been YOUR experience with Game Streaming?

Tried out the PC>Xbox stream with the remote app and it didn't work properly.
I had to plug in a external wifi dongle for the "Remote Display" prompt to show up and connect the the xbox, i could remove the dongle after connecting and it would still display my desktop so it was a wired connection. But the appearance was still unplayable with ethernet...

Waiting for Rainway to be released as an Xbox app before trying again.

Thomas
May 20, 2019 20:24
It was great experience even with a PLC and WiFi between the pc and the steamlink. Maybe a bit of lag sometimes playing shadows of mordor.