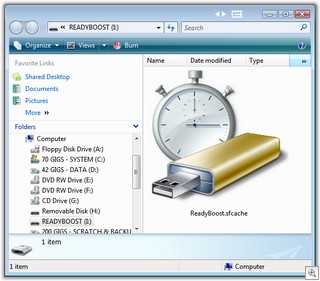 I've had some problems with Vista over the last week, but I'm in communication with a few folks at Microsoft who are helping me work through them.

I've also got word that the FinePrint guys are actively working on getting FP to work under Vista. More on that soon.

But what I'm really digging is ReadyBoost. My wife has a little machine we got for $399 that has 512megs of RAM I think. It has a Windows Experience Index of 1.0 if that gives you some kind of idea of what we're dealing with.

It was doing OK, acting like a slightly slower XP machine. It's had no crashes, blue screens or driver troubles. It's beating on the hard drive though.

I'm loving the idea of ReadyBoost. I told my wife I added more memory to the system, but that's not correct. ReadyBoost takes a FAST (keyword: FAST) USB Flash Drive and adds it into the SuperFetch/PreFetch mix.

According to the ReadyBoost FAQ, a RANDOM 4k read from flash is about 10x faster than from the HDD. Remember we're adding a storage device that isn't as fast as the Hard Drive for big linear files, but it can SEEK around faster than the HDD. When the system is under pressure - that means, in part, disk contention - the system is more responsive.

This is brilliant for me because I'm all about multitasking...I regularly have 100+ things going in Task Manager and I'm whipping between them. However, my machine has 2GIGs of RAM and I'm not necessarily the ideal candidate. My wife, however, runs Excel, Word, IE, and Solitaire on a slower machine and already she's noticed a difference with a 2 gig USB drive connected. My gut says that under load with 4-5 big apps running her system is probably 20-30% faster and the disk is noticeably faster. Again, this is a 512 meg machine with a 2 gig USB disk.

Check out Grant Gibson's growing database of USB Flash Drives/Keys that are compatible with ReadyBoost.

I went over to MWAVE.COM and picked up three Apacer Handy Steno 2gig USB Flash Drives for under $48 each and have them running in my Tablet, Desktop and my wife's machine. I haven't noticed a different in my machine, but my wife's machine . The Apacer Steno is reportedly the USB Drive that Microsoft uses internally for testing, so it's a "reference ideal." It IS wicked fast.

Do be aware of these gotchas I experienced on Vista RC1:

I'll post some speed comparisons as we use these machines more. However, if you have less than a gig of ram, getting a fast USB key should just be compulsory.

THOUGHT: It'd be cool to have a USB port facing straight up in the air on the motherboard inside the case. Of course, one day someone will release motherboards with this built in, just like ReadyDrive.

Dror Engel
September 21, 2006 19:43
The feature is cool, but wouldn't it make more sense to just add a gig of RAM? Should be much more of a speed boost, and cost about the same (I don't follow RAM prices, but I don't think that I paid more than $50/Gig last time I upgraded)

Max
September 22, 2006 1:41
Note that ReadyBoost is *not* a substitute for system RAM. It just makes cache access much faster and relieves the hard drive of some of its work.

Yes, whenever possible you should upgrade system memory first. But it's not a zero-sum game, you'll get perf advantages from having a fast flash memory cache even if your system has 4gb of RAM.

There is also a movement to put flash memory on motherboards and hard drives for similar reasons (ReadyDrive). The big advantage there is that, unlike a USB flash drive, this memory can be accessed during boot and hibernate/resume to speed that up as well.