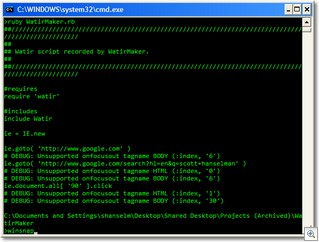 I always thought WatirMaker was a pretty good idea. It was meant not as a recorder, per se, but rather as a "faster typer."

I use it to jump start spikes like my recent Vonage script. If I wrote Watir often enough I'd just use the Ruby interactive shell.

(By the way, if you  have 15 minutes - maybe it's lunch - visit here: http://tryruby.hobix.com/ and try Ruby out, guilt- and install-free, in your browser.)

After I did WatirMaker in C#, Michael Kelly and John Hann wrote it again in native Ruby with the tiniest bit of help from me early on. It's rockin' sweet IMHO.

John emailed me and said that he and Michael are going to look for a permanent home for this, but until then it's here.

Comment on this post [1]
Share on Twitter or Facebook or use the Permalink
July 24, 2006 7:32
I have made a few improvements to the Ruby version of WatirMaker. They are mostly minor changes, the two biggest being support for the :text property of links and the use of regular expressions for asp.net like id values.