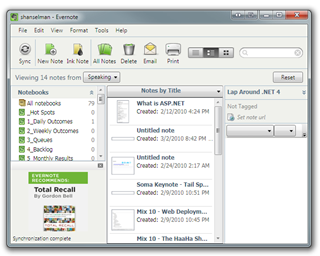 The #1 complaint I hear about WPF (Windows Presentation Foundation) is that many fonts end up looking "blurry." It's a darned shame because really great applications like Evernote get criticized because of this one issue*.

The blurriness happens on .NET 3.5 and below because WPF's graphics system is "device independent" so rendering happens independent of resolution. It makes apps DPI-aware for free and scales them nicely. Unfortunately MOST people are running on 96dpi screens and that's where you'd expect clarity. You can get around this 90% of the time today using SnapsToDevicePixels when appropriate, but it wasn't automatic and it's subtle.

The good news is that with .NET 4 this is totally fixed. You can see with with the .NET 4 RC (Release Candidate) and VS2010, which uses WPF for much of its own rendering. Additionally, a check-in in a recent milestone makes things even clearer with light text on a dark background.

From the WPF Text Blog:

"With this fixed, WPF is not technically pixel perfect with GDI text rendering, but the difference is indiscernible to the naked eye."

UPDATE: A little confusion about this in the comments. Folks feel very strongly about this stuff, understandably. Just like color blindness, some people are sensitive to this stuff and others "can't see it." One person in the blogs didn't like go for "indiscernible" and showed a screenshot. Here's the deal. If you are running VS2010 RC, you don't have this fix. This will be in the RTM. Here's a 100% screenshot, followed by the zoomed in version. The takeaway is this. If you didn't like the rendering before, you will now. This is/was some subtle stuff, but it's indiscernible in the RTM, so be happy! I took the screenshot from a daily build, not the actual RTM, which hasn't happened yet.

Click on these side-by-side images from the WPF Text Blog to enlarge and compare. VS2008 with GDI rendering is on the left and VS2010 (a post RC-build) with this fix is on the right. Of course, the release of .NET 4 will have this fix. 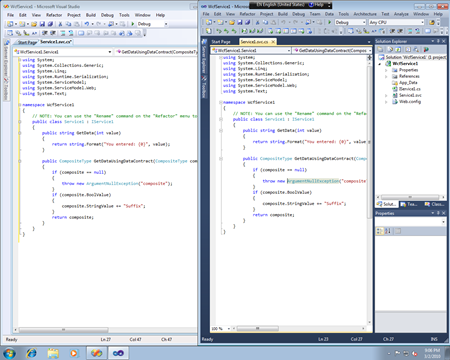 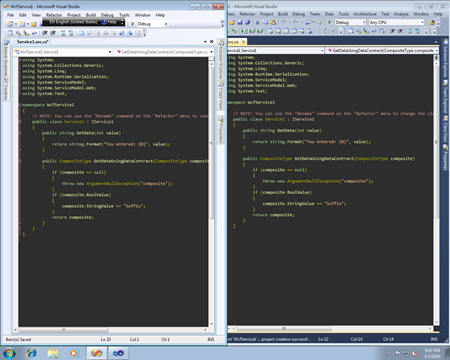 In the comments on the WPF Text Blog, Rick Brewster, the author of Paint.NET suggests that we can really analyze these images using an XOR in Paint.NET.

I've done just that here, taking the dark text on a white background and XORing it. Then, for visibility, I've inverted the result. This shows just the differences in pixels between the two rendering paths. Can't see much? That's the point. 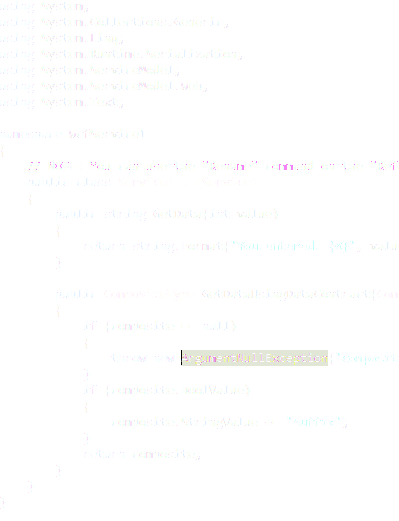 Also, note that this applies to all WPF apps on .NET 4. It's a general fix that's not VS2010 specific. Enjoy. I'll be happy when this is out and everyone's using it, including my favorite WPF app, Evernote.

* I don't know anyone at Evernote, I'm just a fan and I read the comments on their blog. I speak only for me on this issue.

On RC light background looks good but dark background is still bad, not blurry, but text is not well shaped.

Robert Vukovic
March 09, 2010 17:58
I know this is unrelated to the post but thought it may bring back memories. You are not the only one...
http://www.telegraph.co.uk/sport/othersports/cycling/7404062/Lance-Armstrong-almost-banned-from-racing-in-South-Africa.html

Andrew
March 09, 2010 18:03
On the Evernote thing, yes I am also a major fan and the blurry font kills me. Luckily Evernote is so good that I tolerate the blur for now.

Will the fix that was "checked into a recent milestone" be a part of the VS2010/.NET 4 release in April?

Eric Bergman-Terrell
March 09, 2010 18:05
Must say the OpenID login on my previous comment is really ugly.

https://www.google.com/accounts/o8/id?id=AItOawl_rqAN3lnNPeHQJ25n2MPR4pnNzfqLfoA
March 09, 2010 22:03
O boy, good thing you told me it is poor rendering, I thought I needed glasses.
VS2010 does look clearer, not by much but I don't have to strain my eyes telling them to focus correctly all the time.

Google Icon Guy - You don't have the fix, you're running the RC. This was checked in last week. However, what font are you using? Send me your font and theme and I'll talk to the team.

Scott Hanselman
March 09, 2010 22:35
Google "Indiscernible" Guy - I put those two images together overlaid and zoomed in and at a sub pixel level I'm only seeing a difference in color. The 2010 side is brighter, no?

My VS2010 font and color settings were imported directly from my VS2008 .vssettings file, so the colors should be identical. However, the glyphs appear heavier in VS2010, which likely accounts for the perceived difference in color.

I've uploaded my font and VS color settings for you. The settings are exported directly out of VS2008 just in case something went screwy with the VS2010 import:
http://72.167.90.173/FontsAndColors.zip

Scott Hanselman
March 09, 2010 23:41
What about what's more noticeable: How about the blue border in vs2010. I'm usually running windows with the old win95/win2k-look for performance reasons and the dark blue border really grabs focus away from the code. I imagine that there is some way to change theme?

https://www.google.com/accounts/o8/id?id=AItOawlsgD3eyHxekaTSCnbN9pV03Df0Zxg1z9o
March 09, 2010 23:54
Google "Indiscernible" Guy - Confirmed, even though *I* can't really see what you're seeing, apparently some people are very sensitive to the color fringing on high frequency edges of text. I will update the post with three examples to show you that this fix will fix your issue.

Scott Hanselman
March 10, 2010 0:11
No disrespect, Scott, but you must be half blind :). Thanks for looking into this for me. I look forward to seeing your screenshots.

https://www.google.com/accounts/o8/id?id=AItOawl_rqAN3lnNPeHQJ25n2MPR4pnNzfqLfoA
March 10, 2010 0:21
I've updated the post. I assure you, after seeing the details, you will be happy. Let me know. And next time, use a real name/openid. ;)

Ryan
March 10, 2010 0:43
I did use a real OpenID (I use my Google account for everything), and I specified my name, e-mail, and home page. Either it's a bug with the OpenID integration or just the Google OpenID provider. *shrug*

Anyhoo, the RTM rendering in the updated comparison looks *much* better, so I'm happy :).

Evernote, huh?? How does it compare with OneNote (my benchmark for such apps).

https://www.google.com/accounts/o8/id?id=AItOawk8blkD8syV7ded_TEprAE7-d5TnSFUJ7c
March 10, 2010 16:53
Thank goodness. I love the concept of WPF but couldn't possibly have used it because everyone I have shown it too has disliked the rendering. I understood that MS had intended to provide sub-pixel-perfect rendering / positioning but this, in my experience, just wan't what people wanted for most text when viewed on screen. It's the same reason that some people have disliked the rendering in Silverlight when used for business apps.