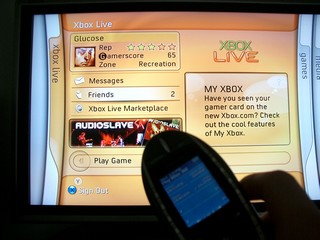 Got a call yesterday that the second shipment of Xbox 360's had come in and the one I'd pre-ordered in June was now waiting for me. I swung by GameCrazy on the way to the store and picked up my shiny new Xbox 360. It also included a limited edition Media Center Remote that will likely go unused. I also picked up:

Of course, I didn't get a chance to use it until Z and Mo were asleep so that probably wasn't very smart. I was up until 2 with the Xbox and until 5:30 with Z.

It's the shiznit. It's freaking awesome. If you can, buy it. Now. Seriously, stop reading.

Gotchas and Things To Be Aware Of IOMHO 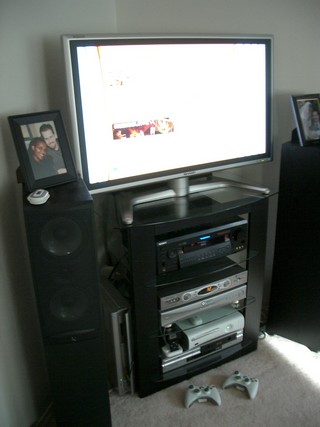 They finally got the casual gamer thing right. My wife will actually be able to play Bejewelled without finishing her PhD. It's very clean and elegant. It also uses a form of micropayments to accomplish two things. One, the conversion between "Microsoft Points, the currency, and dollars, isn't in-your-head easy, so one could find themselves spending money without "feeling it." Two, it allows someone to sell a game for $3.47. I bought Joust and Bejewelled off the bat, and I'll likely get Geometry Wars also.

The first thing I did, before I even played a single 360 game was try out the backward compatibility emulation. I'm so relieved they chose to stick with it, as they'd really have been shooting themselves in the foot if they were going to launch the 360 all alone in the world without the rich existing Xbox library of games.

A few games I like haven't been updated yet, including Lego Star Wars, but the important ones like Halo 2 and Splinter Cell worked. Also, Yourself: Fitness worked so that's awesome. All in all, my conclusion is: Classic Xbox for sale - $75, used for only 2 months, I won it in a raffle.

I was pleasantly surprised that you can download and play demos. I downloaded and played FIFA World Cup Soccer (it was a 600meg download!) and while it's getting crappy reviews, we really liked it. It's not something I'd have rented, so I'd never have played it. Because I could download it as a demo I'll be more likely to buy this game I might have overlooked.

There's three ways you get audio/music playing on your Xbox 360. The first and easiest is just plugging your MP3 player into one of the 3 USB ports on the Xbox 360. I plugged in my iPod Nano and it was immediately (no wait) recognized and showed up as "Scott's Nano" and I was playing music directly off it immediately. I also tried a generic USB MP3 player and it works great as well. There's also an optional downloadable support for unprotected AAC files, so I grabbed that also and it works nicely.

I installed the new Windows Media Connect 2.0 which is a fancy way of saying "a uPnP server built into Windows" and pointed my Images, Music and Video folders from my main PC and was able to play music off it for hours. It's actually still playing this moment, and it'll let you view photos as the music continues which is a nice little attention-to-detail thing. 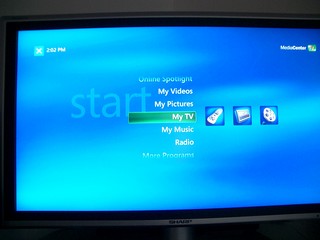 Here's the big one. The Media Center Extender stuff. It's awesome. I tired and suffered with the original (largely unusable) Classic Xbox Media Extender. Because of this and other factors, my Media Center PC has remained in the guest room, largely usused except for a MAME machine.

Enter the 360. The UI is exactly (by my eye) the same UI that you'd get if you were actually sitting at the actual Media Center. It's snappy, in HDTV, and gorgeous. Not only that, but all the HTML-style Media Center applications like NPR and MTV Overdrive work great. We spent a few hours last night purusing the vast MTV database of videos and watched at least a dozen on-demand music videos with family visiting from out of town.

Here's a video of the Media Center (the quality is iffy) in action.

Additionally, you can press the Media Center button on the 360's remote (you may need to buy one if you didn't have one included) and it will turn on the 360 and connect to the Media Center PC in one fluid step. This helps the Wife Acceptance Factor greatly.

I love this remote and I'm convinced that for the dollar it is THE remote to get if you have a complex system. I was thrilled to see today that I could just tell the Harmony online system that I'd bought an Xbox 360 and it became immediately integrated into my larger system. The folks at Harmony (Logitech) are really passionate about their remotes and it shows. I've spent time on the phone in the past with their tech support and it was a pleasure. I had the whole thing working in about 15 minutes.

This was put to the test this evening when some of Mo's co-workers came over and they were able to show pictures of the baby (via Media Connect) without any of them having used the Xbox or the remote before.

Well, it ain't Halo. Not even close. It's actually pretty lame, and I'm disappointed. We'll see, maybe it'll grow on me.

I got this just because we have an 8-year-old visiting and staying with us and I've got him checking out the Game Rating (ESRP) systems. I didn't want to buy only "M" games, so I picked this one up. Wow, what a cute and interesting game. It's a very thoughtful and interesting puzzle/physics game with a silly storyline. It looks a smidge like World of Warcraft in it's ethos, although certainly less serious. I suspect I'll play this game the second most often. It also has a nice co-op 2-player mode which was an unexpected plus.

Had to get this if only to show off the system. It's OK, but until I get a wheel I'm doomed to suck. It's pretty slick, but I should have waited for a Rallysport-type game. I tried Forza on the Classic Xbox but it was too realisitic. I continue to go back to Rallysport2, it's REALLY amazing. See, there I go, talking about an older game when I'm supposed to talk about PGR3. Kind of says something.

Wow. Wow. Seriously. This game is brilliant. Truly and fantastically immersive. Get it, as anything I can say about it would just be silly and over the top.

As an aside, I'm looking forward to the new Splinter Cell: Double Agent and if it looks half as good as Call of Duty, it'll be great.

It works with the current remote and she can show pictures of Z without my help. 'Nuff said, she's happy. If I get it paid off before she sees the credit card receipt we'll still be in business.

glad to hear the media center extender got better.

by chance to the media center slide shows now pan and zoom on the 360?

Tadd
December 15, 2005 9:00
I've been waiting for someone to talk about how the Media Center functionality works with the 360. Thanks for the info. If you don't mind, I'll tap you for information :) Is it noisy (fan noise, etc)? Does it start up in Media Center mode quickly? I assume playing DVDs works well also?

Basically, we're trying to decide whether to move the Media Center PC out of the living room and completely replace it with a 360. The old extenders were not quite polished enough for us to concider this, but the 360 looks promising.

Erv Walter
December 15, 2005 12:17
You've got to get Condemned. It's the scariest and most gruesome game I've played. I've not got a high def TV and I'm still blown away by it. I've spoken to a friend who's just upgraded to hd and he said it makes the game twice as good.

Nick Swan
December 15, 2005 16:47
Cool! Excellent write up! I'm PunchingBoot - if you wanna have a game online. Also in case anyone is interested I also did a mini-video of the dashboard and it shows a snippet of the media center piece.

"by chance to the media center slide shows now pan and zoom on the 360?"

I'm guessing that Scott's pretty busy with the new Hanselman, and there's nothing he and I enjoy more than stealing each other's thunder, so I'd like to answer for him.

And the answer is...

"Can you play COD2 with a USB mouse and keyboard? Can you give it a try and let us know how it works?"

There are rumors of a keyboard/mouse combo.

I've tried plugging in some of my peripherals (hey - lonely geek, late at night - who *wouldn't* start trying to plug weird things into USB holes?), and there's no effect.

Actually, the light on my optical mouse lights up, so that's something. It doesn't help me play, but, dang - it's pretty.

I've also heard that plugging a Media Center keyboard in results in [drum roll] being able to use the Media Center specific buttons. The rest of the buttons (like the ones with letters and numbers on them) don't do anything.

I think it's kind of lame that we don't have mouse/keyboard drivers out of the box. I mean, I can use a bluetooth keyboard with my *phone*, you know?

Plus, with all the Xbox Live stuff, it'd be nice to be able to enter some information in using a keyboard. Like 128bit encryption keys, for example. I was having a hard time getting the 360 on my network, and had to enter that stupid key in about ten times. That's a lot of left/right/up/up/X/down/left/left/left/left/A/left/left/A/etc...

Actually, since the Premium system comes with a mic, they could have at least let me hum my key in using Morse code. It actually would have been easier.

Hey. I think I'm onto something.

Morse code instead of a keyboard.

Rory
December 16, 2005 12:15
Gotta try a multiplayer Infection game on Perfect Dark: Zero... crazy fun. I played the single player stuff for about 5 minutes... multiplayer is where it's at.

I own FIFA06 and agree with you, it's not as bad as the reviews have painted it. I haven't found anything special about it, but if you enjoy playing soccer games and/or enjoyed previous versions (I also had FIFA 04 on the Xbox), then it's fine.

Also, if you liked the original Amped games, you might like Amped 3. The [optional] story line has gone off into bizarro land (which I found humorous), but the game play is still great. Combos are easier than in the first two.

The weird thing is, I'm playing Arcade more than any of the eight full-blown 360 games I own. In particular, Hexic and Zuma are excellent puzzle games -- I'm enjoying both of them more than Bejeweled. Hexic offers both turn-based and timed modes, so you can go at whatever pace you like. Zuma's more fast-paced but involves more thinking. (But it's not as fast-paced as Geometry Wars -- man, I suck at that game.)