(Note, I'm intentionally being a little dense here to make a point...)

BTW: If you want to skip to the point, get the updated 1.1 software here: Xbox 360 Accessories Software 1.1 32-bit for Windows Vista and bypass the excessive clicking.

I've got an Xbox 360, and I've got a PC and I've got four (4) Xbox 360 wireless controllers, so it was a natural thing when I saw the "Xbox 360 Wireless Receiver Adapter for Windows" that I'd take a look. Seems like a brilliant idea, right? A small USB dongle that lets you use your Xbox 360 Wireless Accessories on your PC. Brilliant. One stop closer to the "Games for Windows" (i.e. Vista as Game Console) dream, right?

"Setup cannot install this software because your computer does not meet the system requirements."

Um. Yikes. OK. I got this dialog after running Setup.exe. Didn't make it very far, this is the first thing I saw. My Experience Index in Vista Ultimate is 4.2, and my graphics index is 5.6. I guess my Pentium 4 4Ghz with 2gigs of RAM and a 256M video card isn't up to the task. 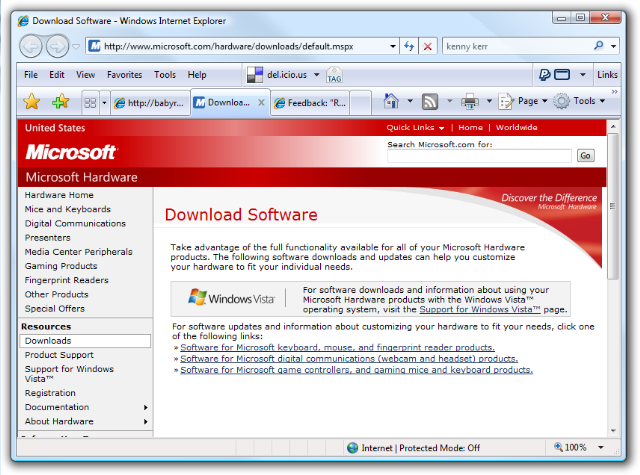 Um...ok. The Downloads Page of microsoft.com/hardware. I have Vista...what is this page telling me Or is it asking me something? Ok, I'll click on "Game controllers..."

Ok...I figure this qualifies as game controller. Hm...as I fill this four-step page out, I'm thinking to myself... 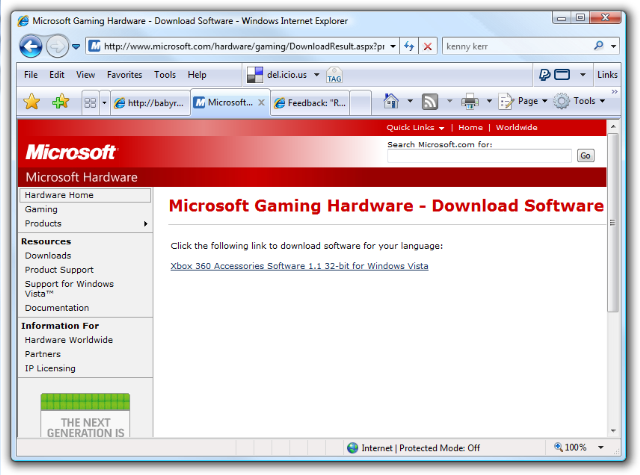 All righty...now we're getting somewhere. Download...Run...gosh this seems like a lot of work.

Make it easy to update your software, and if you ship a setup.exe, teach it to "phone home" if there's a crucial update. Considering that the 1.0 disc I have is totally useless, I can assume that someone realized at the last minute that there's a bunch of Vista machines that were going to get this error message. If the 1.0 setup was built to check for newer ones, this whole thing could have been seamless.

You know what the ironic part is? Take a look at the Program Group in Explorer after everything is installed. There's a Check For Updates icon that points to checker.exe. Why isn't this updating process integrated into Windows Update? 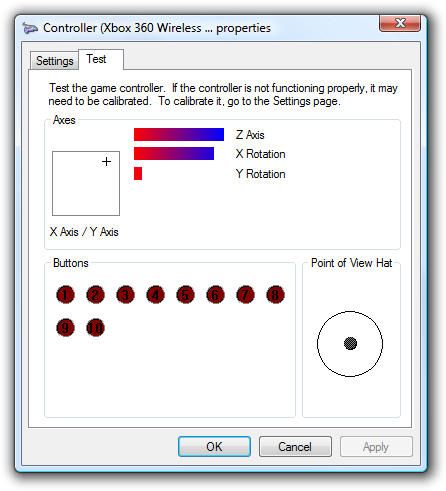 Well, this is a great dialog, but there's no support for remapping. I tried to get the Xbox 360 Controller to work in Half-Life 2, but unless I choose to learn the obscure HL2 language for this kind of thing, it makes the controller less useful.

All the "Games for Windows" games must meet a certain level of compatibility, but that doesn't help me for older games. The newer ones must support this controller (and widescreen monitors!) along with 64-bit Vista. That's certainly something to look forward to. There's just not a lot of Games out yet (and the Games site's "Game Advisor" doesn't support FireFox!).

There IS, however, a tool called the Pinnacle Game Profiler that says it'll add support for a Joystick to any game through a series of remapping profiles. Unfortunately, not only does it have trouble on Vista, but it caused Vista to display this astonishingly scary pair of dialogs that I'd never seen before: 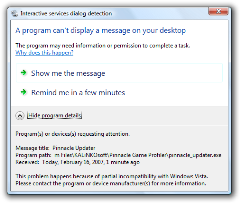 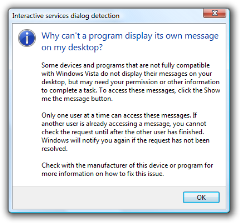 This was of course, far too dangerous to risk on my new Vista machine, as things are humming along nicely so far. Who am I to install some crazy remapping software that's not Vista savvy. Maybe one day soon they'll fix it. I hear good things about this remapper.

Until then, my Xbox 360 Controller Wireless Receiver Adapter for Windows is unused, but I have high hopes.

Comment on this post [14]
Share on Twitter or Facebook or use the Permalink
February 16, 2007 18:26
I was totally sympathizing with you. On reflection, I was surprised at how high your expectations were. Don't you know that this is what it's like on a PC? Then it hit me: you're using XBox hardware on a PC, and you were expecting an XBox experience. What you got was the typical PC experience.

By the way, I completely fubar'd my XBox Live gaming the other day -- no gaming with other players, no chat. The culprit? I set the host value for the XBox. When I set it to have no value again, the problem went away. If they're going to put in a "feature" that seriously breaks the machine, shouldn't they at least put a big "DO NOT TOUCH" sign on it?

Dave P.
February 16, 2007 18:59
The scary dialogs are from a service attempting to display a window on your desktop. They are trying to avoid "shatter" attacks because services run at a higher security level than you are running. There's some ok information at the Wikipedia article: http://en.wikipedia.org/wiki/Shatter_attack

Dustin
February 16, 2007 18:59
I have the AVG Antivirus free edition on my Vista machine and every time that it auto updates its definitions it displays the same dialogs that you saw. Strange and scary.

jesus garza
February 16, 2007 20:09
If you want some immediate use from your receiver and a chance to take some new technology out for a spin at the same time, download the XNA Game Studio Express and open up it's Space War demo application. It's integrated with 360 controller and is a cute little game.

Scott Hanselman
February 16, 2007 21:59
Scott, I think you're stalking me as I had the same exact experience last night.

If you're looking for more crazyness, try this. You mentioned checker. which currently doesn't find any updates -- but if you check for updates in Vista (which itself is under security.. *boggle*) there IS an update apparently for the Wireless Reciever Adapter. Uhm.


Anyway, I have the Wireless headset and it works well with Vista. If you want to play around with the 360 controller, head on over to live.local.com and view the world in 3d -- it'll let you pan/zoom/rotate/etc with the controller.

The 360-messsage-looking-dialog is pretty spiffy for controller config.

I just set up the receiver yesterday as well and also installed Pinnacle Profiler. I received the same strange warning message after reboot as you, but after clicking my way through it (it doesn't really give you many other options) I was able to get it up and running just fine. I've since use the Profiler to get the controller working with a few games and have even used the wireless headset to talk using TeamSpeak (http://www.goteamspeak.com/).

The only bummer is that once you have applications up and running there does not appear to be a way to switch which output device they are each using, though the new volume control panel is smart enough to tell you which one they are currently assigned to (in the drop down menu at the top). This means you have to be careful about the order you start applications and what you have assigned as the default audio output when it is started.

If anyone knows of an easier way to change the audio output device assigned to an application, PLEASE let me know!

Troy Goode
February 16, 2007 23:51
PS: You seem to be having some kind of problem with your gravatars (I received an error message when I posted my above comment, all the gravatars are slow to load on page refresh, and each gravatar seems to load as a default non-gravatar image).

Troy Goode
February 17, 2007 1:41
Actually you can get XNA working on Vista, you just need to work a little harder. The big problem was the C# Express not working, but SP1 fixed that. More details here:

Tim Rayburn
February 17, 2007 1:41
Actually you can get XNA working on Vista, you just need to work a little harder. The big problem was the C# Express not working, but SP1 fixed that. More details here:

The wierd error messages you saw are a result of changes to the session manager in Windows Vista. In Windows XP, services ran in the same session that the first user to log on would get, Session0. This is a security risk because one of the user's processes could potentially hijack a service that has elevated permissions. In Windows Vista, the services live by themselves in Session0, the first user gets Session1, second user gets Session2 and so on.

It does mean that the system has to perform the equivalent of fast user switching if you want to view any UI that is displayed by a service. I saw this for the first time a couple days ago and it was rather annoying.

officerjoe@gmail.com (Joseph Kilada)
March 23, 2007 19:08
Well at least you got it to work. I have yet to get it to work on VISTA or XP. The little light goes round and round. Hit connect and it connects with the dongle but then the controller light just starts to spin. I have heard that it may be a conflict with my wireless USB mouse but have not managed to get it to work even when I unplug it. Of course microsoft have no help online and the EMAIL help line sends me to XBOX 1-800 number but then they say it is a PC problem.

MS just have not figured this one out and it does not look like they really do not have much intention of doing so.

They just got a beta out with vista support