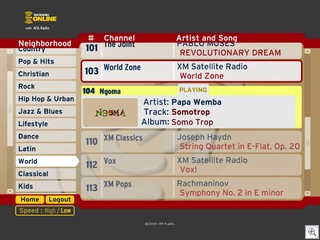 Yikes, can't believe I missed this! I was literally sitting down this evening to WRITE this application (and probably base on most of Casey's MCPC stuff) then I figured I'd Google for it first.

I loves my XM Radio, and I listen to it constantly. I particularly like that I can jump out of the car and log into http://www.xmradio.com and keep listening over a web stream. 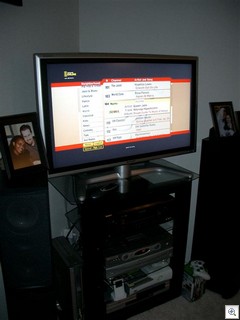 Now that Mo's home with the baby, I wanted her to be able to enjoy XM, so I figured I'd get a new Receiver with XM built-in to replace the old $99 Sony from 1996 we have.

However, since this HTML-based app works with Media Center, it works over Xbox 360. Yes, folks, XM Satellite Radio over Xbox 360. Say what you want, but I'm impressed. My digital life is coming together and it's happening on my Xbox 360. I know that gushes, but the WAF (Wife Acceptance Factor) for the Xbox purchase is now very high. She can happily listen to Ngoma (the African channel for XM that is only available online) at home!

I hope XM realizes how cool this integration is and continues to support it.

UPDATE #2: Be sure to read the complete (technical) description on how the MCML (Media Center Markup Language) remotes the main UI. The main Xbox360 Media Center screen is render locally - it doesn't use Remote Desktop. This article also talks about how Vista will make the Xbox 360 Extender experience even better.

UPDATE: The good and valid question of (paraphrasing) "so what?" was brought up in the comments, here's my answer:

XM radio is (basically) protected content. Typically you need a hardware decoder installed in your car. However, if you're a subscriber, you can sign into their protected website that attaches you to live Windows Media streams; everything is behind passwords, etc. You can't just connect in for two reasons - Xbox 360 does NOT support random web browsing, it only supports MCE apps and you can't tell the 360 to connect to arbitrary streaming URLs. I was going to write my *own* MCE app to front all this password and streaming schmutz, but turns out they did it in 2004. The good/interesting thing is that this little app isn't widely advertised and that not only does it work on MCE2005R2 but the whole streams to the Xbox 360. What's significant is that, A. I'm consistantly impressed that the Xbox's remoted UI is so close to the actual MCE (indistinguishable) UI and B. Its nice that XM Radio thought to create one of these even if it's simple and C. The fact that I pay one subscription for XM and the content is provided to me in 3 ways shows (to me) that XM is more than just "in my car."

Comment on this post [9]
Share on Twitter or Facebook or use the Permalink
January 18, 2006 6:49
I have to be the first to ask: what about Sirius? No, I'm not a Stern-head and I certainly don't need him in 5.1. But there's an HTML interface for Sirius, I think.

Did you expect something different, since the Xbox is just using Remote Desktop Protocol to connect to the MCPC? (Just struck me as an odd thing for you to comment on)

I assume you meant does NOT support random web browsing, right?

So what is considered an "HTML based app", as opposed to a regular web-page? Would I be able to watch the PDC videos I downloaded from Microsoft (which are controlled by interactive IE-only HTML) through my 360 when using MediaCenter? If so, I may just have to upgrade from Pro to MC...

Luke Hutteman
January 18, 2006 21:14
Luke - Thanks, fixed. Yes, if they are in the right video format (use Videora if they aren't) then you could totally watch them. An HTML app is the special MCE/HTML/Flash schmutz that one uses to make MCE UIs.

Jason - It's my understanding that the Xbox 360 does *NOT* use RDP, but I may be mistaken. I'll look into it. If you had suffered with the 1st-generation Extenders that looked NOTHING like the "home base" you'd be surprised also.

Scott Hanselman
January 19, 2006 0:13
Update from Charlie Owen, we're both right. The HTML stuff is RDP but the primary UI for MCE is *natively rendered* on the Xbox360 - that explains it's quickness.

"Here is a quick matrix on how the various types of experiences will remote to Media Center Extender on XBox 360. When I say 'Remote Desktop' I really mean technology similar to remote desktop, but not the same -- expect 3-5 frames per second, full screen updates sent over the wire. Rendered natively on the XBox 360 means we send the MCML over the wire which is interpreted and rendered on the XBox 360 (full 30 frames per second).

Scott Hanselman
January 19, 2006 4:38
considering the PDC05 presentations (from http://microsoft.sitestream.com/PDC05/ ) can be viewed on a non-MC system, I'm guessing it's not a MCE UI and therefore not viewable through a 360.

It might be possible to watch the individual wmv's, but the IE dynamic html interface combines several videos with slides, in a synchronized fashion. It'd be nice to view this thru the 360, but I doubt it can handle it.

Luke Hutteman
January 19, 2006 16:10
This sounds like a big waste of programming time. I have been listening to XM Satellite through the Xbox 360 since launch (as well as the Xbox 1). XM Satellite has always been listed in the Media Center Extender under Online Spotlight. Just go to Music > XM Radio and enter your password and username. Great UI. Works perfectly. And it's already built in.

Why would someone waste their time creating an add on?

Brian Kvalheim
January 23, 2006 20:45
Brian, it's not "built in" but rather hosted at XM and linked to from Online Spotlight. I didn't write the application, only stumbled upon it. Sure, it's 18 months old, but the fact that it's being 'discovered' by other folks show that not only is the Online Spotlight an obscure place to put featured stuff (who checks it daily?) but that even XM themselves haven't shown off this feature. My bad for not checking for it earlier.