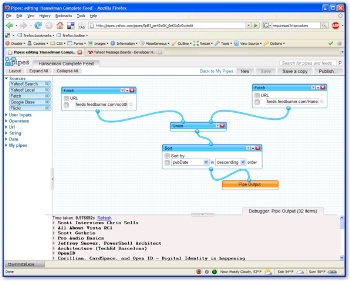 Folks continue to blow me away with what can be done with JavaScript and Ajax. Seriously. Yahoo Pipes is amazing. Truly.

I always look at things like this with my non-technical family in mind. Things like DabbleDB are easy enough to use that my Dad or Wife - to be clear, experts in their fields of FireFighting and International Business respectively - could be very productive, very quickly. The same is true with anything that 37Signals does, and other very UX (User Experience) focused Ajax apps. It took a bit to convince my wife that Gmail was the Second Coming of email, but now she's convinced. Anyway.

I saw Yahoo Pipes and immediately had these thoughts (this is the one-sided conversation I had in my head):

"This is the beginning of that Semantic Web we've heard so much about. All I have to do is teach folks that URLs point to stuff that has some structure - like a database in the sky via hackable URLs - and they can go from there."

Here's Not-Technical Me, pretending to be a Web Enthusiast, like my Dad or Wife. This person knows that Feeds exist at URLs.

"Hm, so it looks like Yahoo Pipes likes to consume Feeds so I'll make a unified Feed for both my blog and my podcast."

"Ah, Union, ok, under Operators. I had to look for that one. Not combine, but OK, drag a Union over here, how do I connect...Oh, wow. That's cool, just drag a line."

"Now I need to sort them by the date they were published, so new stuff is first."

"Drag a Sort over. Cool, so now click the drop-down...I figure pubDate must be Publication Date. I wish there was a Data Dictionary that would have made that easier to guess."

"So now I drag a line to Output. Cool, I see the output at the bottom."

I'll save you the carnage, but at this point the Non-Technical User of Yahoo Pipes is what we call in the Technical world "Screwed" because the Technical User realizes by looking at the source of the pipes resulting RSS here that the Sort widget sorted the Dates in alphabetical order.

This is lame, dear reader, for two reasons, in my opinion.

Two, while Dave Winer thinks that Yahoo Pipes are something that only a technical user would care about, I personally think that it's time to make the web more accessible. That means I shouldn't have to know JavaScript to make a Mashup. The idea behind Pipes is wonderful. That enthusiastic and creative folks who know that a URL can point to a Feed and that Feeds have Good Stuff™ can make Better Stuff™ that is greater than the sum of its parts.

So, Number Two is basically that it's pretty amazing that, even in Beta, an application that speaks RSS and intends to produce RSS at its core doesn't understand one of the most fundamental data types - a date and a time.

That said, I'd still say Yahoo Pipes is going places. This is a silly stumble out of the dates, I mean, gates, but seriously, go check it out. Their developers know this is icky and say it's on their ToDo List.