Remote work isn't normal. It's great when it's not quarantine work, to be clear. I've worked remotely with success for over 13 years and written about it extensively. I'm pro-remote work. But.

Doing zoom calls all day can be super productive but they are also physically and emotionally exhausting. One of the reasons that isn't helping you is that a zoom meeting isn't a natural human state - it's a simulation of one and your body knows the truth.

I'm using "Zoom" the brand here as a pervasive generic verb like folks use Kleenex for tissue or Google for any websearch. I zoom with Teams and google with Bing, for example. You get the idea.

So what do I mean when I say "remote work isn't normal?" Why such a declarative statement? Because I'd propose that our lizard brains know that we're talking to ourselves, alone in a room.

"The brain stem, the cerebellum, and the basal ganglia – commonly known as “the lizard brain” because it’s the part we inherited from our reptilian predecessors – are responsible for fight or flight responses, fear, suspicion, and anxiety. The lizard brain kept our ancestors safe when a panther pounced from a limb just overhead. In an ironic twist, these most ancient parts of the brain are making it difficult for us to think rationally at a time when rational thought is key to our survival." - Courier Journal

Your body knows the people aren't there. Their electricity isn't in the room with you. They are flat. All their voices come from one point in space, not from all over the room. There is no sense of space. Even worse if you have headphones. They are 3 inch tall tiny talking heads while their voices are 1 inch from your ears. There's a strange detached intimacy where you're both closely connected to the group virtually while utterly disengaged physically. 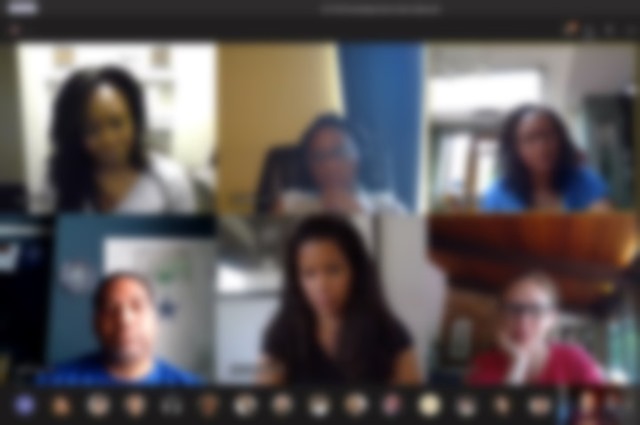 A Brady Bunch grid of faces is not what the brain expects when you're having a meeting, so we're constantly fighting against the cognitive dissonance, the background process load, the psychic weight, that we ARE in the same room talking with our co-workers.

Your conscious brain says you're having a chat in a room with a dozen of your co-workers but the unconscious brain says you're not. It's small but I'd propose it's there. Doing this for hours and hours can give you the same kind of unease that you get from flying in a plane. You get off the plane and you're exhausted from sitting. Sure there's humidity and oxygen issues but there's also the "you know you're moving but parts of your brain disagrees" cognitive load that can't be ignored.

Remote video group calls are an amazing enabling technology but it's also enabling to acknowledge that they can be draining. That simple acknowledgement - huh, that's a thing! - is itself empowering. If you name it you can claim it. It's not just you!

Fleet Command
June 29, 2020 19:26
Try audio only, no video. Your brain will be happier. I have done audio only calls with some screen sharing for 7 years, much more productive and not tiring as video calls.

CESAR INTRIAGO
June 29, 2020 20:12
Cesar's 'audio only' suggestion reminded me of a recent Internet phone call I had where there was a second or so lag which really disrupted the ryhthm of the conversation. My brain was dedicating cycles to correcting for this lag and it made the call quite distracting and tiring. Compare this to a normal phone call with undetectable lag and the end result is quite different. It would follow that video calls with audio and image lag would require even more subconscious effort to correct for it. If we had super-low latency audio/video calling without any perceivable lag I wonder if this would improve the unnatural feeling. It's not the only issue but for me it feels like the one which creates the most fatigue. Thanks for the post, Scott.

Andy
June 29, 2020 20:15
I work in a team of dozen mostly-remote developers. Since the governments created panic about human-malware we became totally-remote (mostly managers were working from office and all devs worked from home-offices for years). Change in productivity since then, if any, is positive for us.

Goran
June 29, 2020 20:22
You still google with bing? I too am trying that journey because chrome is so tiresome and Chredge (new edge or whatever) is so much easier to use. But when I wanted to know how much weight in drug dealer units a person lost in twelve weeks, while bing went crazy, google was able to tell me with the following simple query “((220-187)/12)lb to kg”. I can’t google with bing. It doesn’t answer questions rationally.
That said, I too discovered the wonderful joys of voice only calls. There is quite nothing like putting your earphones on and putting your phone in your pocket whilst you comfortably commune with nature during a Skype call. If people saw the joy and tranquility on my face during Skype calls, they would be mad.
Try it. Zoom with teams on your phone, plugin in your earphones and go audio only as you walk about outside. And for goodness sake, don’t belt out the theme song to “The Sound of Music”, until you have muted yourself (apparently everyone has an opinion about music during calls).

Last time I was in an office full-time was in 2007. Even back then, my coworkers weren't constantly in my face, so "being on zoom all day" sounds to me like an egregious misuse of the tool. If that's what you're putting your coworkers through, stop it.

And why would this cognitive dissonance as described apply here but not, say, when watching TV? Is it any different, except perhaps for your active involvement? If people are zooming so much that this is "a thing", then I consider myself lucky I only talk to my coworkers, say, for a *total* of maybe one hour a day.

*Everything* done in excess is not a good thing. No need to psycho-analyze beyond this.

Our brains are very used to use position to filter out background noise and tell who is speaking to us, so beyond just being cool, this would actually make it easier to differentiate speakers, especially if more than one person is speaking at a time.

Jonathan Marston
June 29, 2020 23:26
Great article. I've been feeling tired since the first weeks of long video calls and this explains a lot.

It lets you get some no screen time during the meeting to recharge for the productive work outside of meetings.

Hours long pair programming on a call is just as bad and unproductive to do every day. Once a week or less is better.

The trend towards using business tools which are Facebook for work leads down the lowering productivity path.

I have a 4 hour programming task with complicated logic and long cycle time to test/debug it, distractions matter, distractions mean lowering productivity to under 10%.

Hey, I stopped my in the zone development time to see an animated GIF posted to our group messaging system. That's 20 minutes of my productive life lost due to an unnecessary context switch.

Audio only with some screenshare
June 30, 2020 21:00
While I spent half a lifetime in video production, I now work for an conference calling company. Audio-only conference calls have long borne the brunt of bad jokes. The entire industry has been dismissed by technologists as dull an basically dead. But the world still does much, much more audio conferencing than video conferencing.

The issue of cognitive burden exists even in audio conferencing. It's why we get tired so easily after a long call. It stems from poor audio quality making it difficult to understand what's being said. Our brains have to work harder to extract meaning, so we get tired.

Improves audio performance, like wideband codecs and transducers help a lot. The US military has a ton of research about this. They think in terms of "ambiguities" per minute of speech. In the battlefield ambiguities cost lives.

This is why I always wear a headset with a boom-mounted microphone. Perfect, consistent microphone placement is key to delivering the best audience experience. People usually don't realize how bad they sound, or know that they could sound better. It's up to the people at the far end to let them know.

Michael Graves
July 01, 2020 15:08
I noticed that effect on myself. I never could focus on remote calls same as on remote calls. I hope that people will recognize this and keep them short.

Filozofia
July 04, 2020 7:10
I enjoy it for creating the details, keep up the truly amazing perform continuing

This article from National Geographic supports and adds to what you're saying:

Also, video calls trap you in an invisible box - the camera's field of view. In an in person meeting, you can move around inconspicuously, on a video call you have to stay within a confined field of view.

Another thing that irks me is that there's no established etiquette regarding video vs audio only when setting up a call. Creates an awkward situation when one participant is using video and the other isn't.

Thanks for the article!

Extrarold
July 07, 2020 23:18
It'd be nice if all you Microsofties and MVPs could stop Tweeting about politics. I DON'T GIVE A FUCK ABOUT YOUR POLITICS. I only care about technology. Grow the fuck up you bunch of petulant clowns!

When working with partners or customers I turn on video if I'm able, but never with internal teams & co-workers. After 10 years working from home exclusively with the same group of people who also all work from home, we have come to believe that although they are more entertaining, video calls are actually counter-productive to getting work done and communicating effectively.

As for the lizard brain making you tired, I'm unconvinced. Dandy pointed out that TV should have the same issue, which makes some sense. I think actually the problem is too many long meetings. When I did work in an office, if I had a day full of meetings I always left work feeling exhausted and unproductive. That may just be the introvert in me, opinions from extroverts not welcome. :p