I'm a paying DropBox customer myself with over 60 gigs in there. I also use BitBucket and GitHub for source code.

I also like tidy and pretty icons, for folders, programs and external drives. I made custom icons for the Visual Studio Command prompt as well as Visual Studio in PowerShell.

I put all these new cloud folders as well as my GitHub and BitBucket folders (these aren't custom apps, just folders where I keep my source repositories) in my favorites in Windows Explorer.

I made custom .ICO icons for GitHub and BitBucket from high-res PNGs. Just right click on a Folder, click Properties, then Shortcut Change Icon to select your custom icon. 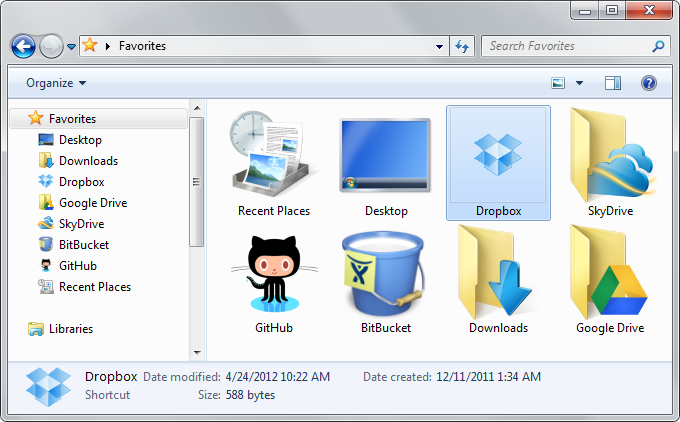 Select your icon from your folder properties as shown in this screenshot: 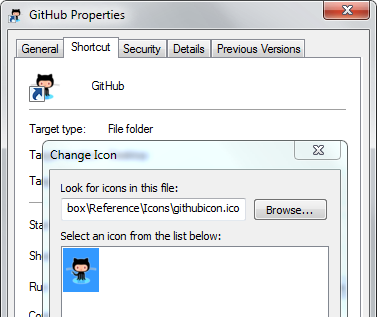 That DropBox icon isn't fitting in with my whole "Cloud Folder" aesthetic. I was going to make a custom DropBox icon by combining their icon along with the standard Windows Explorer folder icon but I double-checked the Dropbox.exe first. You never know if the designer may have left some optional or alternative views of an icon in the EXE. Plus we know that the DropBox folks pay attention to details.

I can see in %APPDATA%\Dropbox\bin\Dropbox.exe that there are other views of the main DropBox icon. 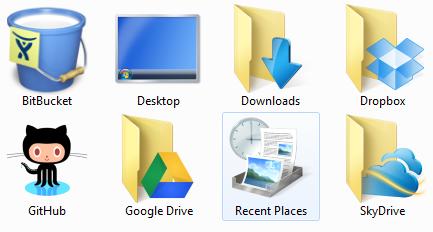 I put my custom icons up on SkyDrive.

Quang Dũng
April 24, 2012 22:06
I just installed SkyDrive but it seems like the DropBox folks are much more ahead of the MSFT people. I hope I get the DropBox features in SkyDrive when the actual release comes out. What do you think?!

Alireza Noori
April 24, 2012 22:13
If you're ever hanging out with the Skydrive folks, see if they will make their native client work on Snow Leopard. :)

Andrei Drynov
April 24, 2012 22:57
Hi Scott,
I was just wondering: do you use a single folder to check out your bitbucket sources to?

Only then it would make sense to have a bitbucket icon (or Github).

Scott Hanselman
April 25, 2012 0:13
Nice Icons! Someone needs to win this 'cloud storage war'. I'm pulled in different directions. I think I may stick with Google as I've almost everything up there already. Gdrive just makes things more accessible for a lazy person like me.

Jose Gonzalez
April 25, 2012 1:44
Just to clarify: I like to organize my projects/folders by type of project/app, not by source control type. I forget those :)

...not by source control type. I forget those :)

You wont with these shiny icons :)

SyncToy rules on my folders I want to backup ---> BoxCryptor Virtual HDD ---> DropBox folder ---> Up on the Cloud !

Ray O'Neill
April 25, 2012 23:36
Next it'll be Twitter Drive. Then McDonald's Drive. Followed shortly by Burger King Drive, Wendy's Drive, and Pizza Hut Drive. At which point there'll be Walmart Drive. And then Purina Drive (for your pet's files).

After that all of the sports teams from the various sports leagues around the world will have their own (Team Name) Drive. Then the flood gates will open: soft drinks vendors, booze companies, publishers, candy makers, ... soon every single company with more than 20 employees will have their very own __________ Drive.

And we'll all be stuck trying to help our parents remember which __________ Drive they uploaded those vacation photos to (was it Disney Drive or Universal Studios Drive or maybe it was the ________ Drive for that nice restaurant they ate at, you remember, the one that was next to that shopping plaza with the Walgreens, oh what was it's name...) while trying to figure out which __________ Drive our boss put the new cover sheets for the TPS reports on.

Quick, someone tell Google that Amazon revived Webvan so we can get the "cloud grocery delivery" arms race underway. I could use six or seven companies competing to warehouse groceries for me somwhere and next day mail them to me as needed. "What's for dinner tomorrow honey?" "I dunno, check the Google Fridge, the iRefrigerator, the SkyFridge, and the Amazon Cloud Refrigerator and see what we have."

Paige Cook
April 27, 2012 6:57
Is there any way make explorer open to the "Favorites" folder automatically? I can't seem to find the shell GUID for that one.

I was just wondering, what do you do about projects/files from CodePlex? There doesn't seem to be an icon for that site.