In August I purchased and reviewed the Microsoft Touch Mouse. I still use my Microsoft Arc Mouse more than the touch, initially due to what I felt was dodgy scrolling performance on the Touch Mouse, as I mentioned in my review. Still, I've kept it in my backpack and I use the Touch Mouse perhaps a few times a month and have kept the software up to date in case there's some software changes made to improve performance.

I can happily say that they've changed something and the scrolling performance is WAY better. I can finally get 1 to 2 pixel precision with it while scrolling in my browsers. The other nice feature is the "three finger swipe up" which gives you effectively a Windows version of the Mac Expose window switcher view.

Today I noticed while catching up on Long Zheng's excellent blog that the Touch Mouse Sensor SDK is available for download. Per their site:

Using this SDK, you can create your own applications consuming the 13×15 sensor image. The SDK includes C# and C++ samples demonstrating how to read and manipulate sensor data"

OK, so what can we do with this thing? It comes with a number of samples to get the bitmap from the sensor and process it. It includes examples in both C# and C++. Because I don't have C++ on this machine I got an error opening that solution, but you can just remove that project and still build the samples.

You don't need to do your work in a graphical application, although it's nice to visualize this data of course. First sample is a console app, that tells you were the center of mass of your big fat finger is.

The smarts are in the Microsoft.Research.TouchMouseSensor namespace. You implement a callback function that the mouse effectively calls whenever something interesting happens. It looks like this:

As you can see, the image size is 13x15, always. You get the raw bytes that represent the image, 195 bytes long.

The first thing I was surprised to see was just HOW MUCH of the surface area of the mouse is covered and how high the resolution is. I was thinking, "13x15? That's so small, how could it tell me anything useful with such a limited structure?" Well, that's how clueless I was.

Of course, each of these bytes is giving a number between 0 and 255 so a lot of information can be extrapolated between two pixels with different values and you can get a pretty detailed picture of what's going on. How much? Well, before I move on to a graphical example, why not abuse ASCII as much as we can?

First, I'll output just the hex values with this code, then show what it looks like when I move my figures around the surface of the mouse.

Cool. But what about with color? I could use the default Console stuff and set the colors, or I could get direct access to the Console, use the Win32 APIs and what not, but I could also use Tim Sneath's ConsoleEx class that's on NuGet thanks to Anthony Mastrean! First, I'll "install-package ConsoleEx" to bring it in.

How about a mouse touch heat-map with color? I thought about building a whole "find closest color" map and trying to map 255 different colors, but then I just did this.

And the result is this:

You can do the same thing in WPF, of course, with better bitmap support, but seriously, with a Console-based heatmap, who needs graphics? ;)

OK, fine, here's the sample code that takes the results of the TouchMouseSensorEventArgs and creates a grayscale image. 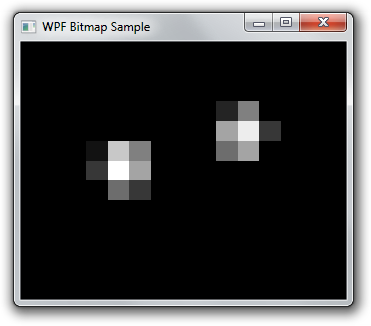 One way to look at this is as if the surface of the mouse is a tiny Xbox Kinect. What kinds of gestures could I recognize and hook up to do stuff? Control WIndows, do custom stuff inside my application, browser, or whatever. Any ideas?

The downloads are here:

Isaac Overacker
January 19, 2012 20:49
With all the SDK and code samples i really think i will be getting that mouse soon!

While using the mouse, do you feel it gives you an edge over a regular mouse with scroll wheel?

Keep up the flow of cool things :)

Scott Hanselman
January 19, 2012 20:51
Can you bind the touch sensor to "Move Window"? Such that it just moves the window your cursor is on, while maintaining the cursor position on that window. You would avoid losing your current mouse position when you only want to move the window around.

Or is that my personal "first world problem"?

Pablo Coberly
January 19, 2012 20:56
You could also use the grid to draw and recognise alphanumeric characters. "Writing" the letter or number on the mouse would be the equivalent of hitting the key.

Pablo Coberly
January 19, 2012 21:53
how about doing at least doing mouse stuff as good as a good regular mouse.

its a horrible mouse, i brought it back to the store after 2 weeks of usage. There is no excuse for releasing an update on the software after more then 3 months. This was an release of a buggy product and there was no way that ms did not know about that. A release was more important then deliver quality.

I switched back to my ms pilot mouse.

ed
January 19, 2012 22:24
I would love to see a plugin for VisualStudio that adds gesture support to the debugger. I find myself using the mouse quite a bit in the debugger to hover over variables and highlight expression, there a lot of potential there I think. For instance:

Obviously, the specifics could be changed slightly, or perhaps made configurable.

Leopold Bushkin
January 19, 2012 22:27
Oh, and perhaps moving your finger in a circle could work like the original iPod, where you would continue single-stepping through the code every quarter or eighth of a rotation (rather than mashing the F10 key)...

Leopold Bushkin
January 19, 2012 23:30
Gotta agree with Ed. It's a horrible mouse. I got it because I thought it looked cool - and it does, and it has seriously cool packaging. Kudos to the packaging dept.
But the mouse is heavy, the whole-body-click movement is clumsy and heavy, the right-click is unreliable and the friction with the table is high. And then the scrolling was lame compared to a good wheel. After using it for just 10 min, my hand was aching. I persisted for about 2 weeks with everyone admiring it on my desk then put it back in it's box.

RichieRich
January 20, 2012 1:12
If you like the tactile feedback of a scrolling wheel, but still like the cutting edge, maybe you should try the arc touch mouse. The scroller is touch, but you get both tactile and sound feedback as if it was a real scroller. The size of the mouse is about as big as a normal desktop mouse, but it is intended for laptop users. I love the way it folds so it can be easily put away on your bag. I definitely recommend that mouse.

jstawski
January 20, 2012 11:10
Hopefully you can use it as an alternative to a multi-touch display in Windows 8

The built-in gesture support is interesting, though.

But, there is no information in this article on defining custom gestures.

Can you even, using the SDK, intercept the built-in vocabulary of gestures and "do your own thing" based on them, over-riding their "default effect" ?

Just not information in this article to begin to evaluate whether this would be of interest to me.

If they put the ability for tactle feedback into the "mouse"...
pins that could rise or fall about 2.5 mm on the control surface
- pin head size = to screen pixil size...
AND
include a logical screen overlay (one byte per pixil) that would be used to indicate virtical displacement...

Oh, I don't think you would have to worry about Apple and Google here, Microsoft would be the eary bird (like it is with Kinect)

David S
January 22, 2012 4:29
So do you stand by your original recommendation of "meh", or have driver updates allayed all your reservations?

joshua.c.gillespie.myopenid.com
January 22, 2012 15:07
I got a Microsoft Touch mouse at Fry's for $49. I'm disappointed in the gestures, no pinch, no need for "Minimize" "Maximize" as gestures, low value in window snap.

I'm hoping this will be a decent mouse for Windows 8, but in the developer preview it's just not there.

Still, it's a good size and weight, and although the effort to have sensible gestures isn't there yet, maybe Microsoft will decide they might want to sell them, and realize that this device could be a stopgap for Windows 8's touch centric UI for users with older non-touch hardware.

Thanks for the info.

Robert Lomax
January 22, 2012 20:00
The protocol has been reverse engineered, and a Linux kernel driver is being developed: http://blog.maurus.be/index.php/2011/09/ms-touch-mouse-reverse-engineering/

Janus Troelsen
January 23, 2012 18:37
I had the arc mouse and though it took a bit to get used to the touch mouse, I wouldn't go back. Some of the scrolling issues in particular applications can be corrected by adding them to the list of apps in the mouse settings for the mouse software to help out. The "these apps don't have smooth scrolling" part. The SDK being available should make it even better.

Daniel Danilin
February 19, 2012 4:01
I just bought this mouse today. I like it as a regular mouse, although I am concerned about the lack of a middle button for CAD. If I could add a 3rd button and pinch zoom, this would be the perfect mouse.

Ray
March 06, 2012 10:46
As Touch Mouse SDK exists, many of the missinf functions may be implemented. Touch Mouse Mate, http://touchmousemate.codeplex.com, currently implements middle click. Will see if anything else can be added.

Just bought one for 40 bucks ;)
I'm going to be writing hopefully a gesture support hook into FF/Chrome. Anyone do that yet? :3