A while back I did a post called Proper benchmarking to diagnose and solve a .NET serialization bottleneck. I also had Matt Warren on my podcast and we did an episode called Performance as a Feature.

Today Matt is working with Andrey Akinshin on an open source library called BenchmarkDotNet. It's becoming a very full-featured .NET benchmarking library being used by a number of great projects. It's even been used by Ben Adams of "Kestrel" benchmarking fame.

You basically attribute benchmarks similar to tests, for example:

The result is lovely output like this in a table you can even paste into a GitHub issue if you like. 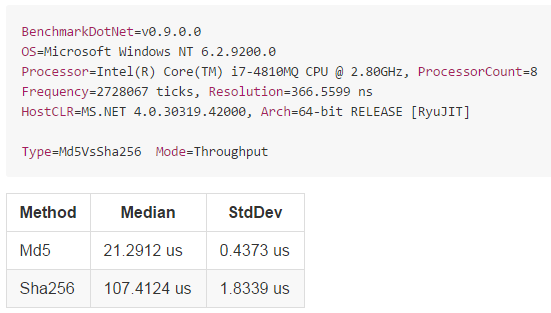 Basically it's doing the boring bits of benchmarking that you (and I) will likely do wrong anyway. There are a ton of samples for Frameworks and CLR internals that you can explore.

Finally it includes a ton of features that make writing benchmarks easier, including csv/markdown/text output, parametrized benchmarks and diagnostics. Plus it can now tell you how much memory each benchmark allocates, see Matt's recent blog post for more info on this (implemented using ETW events, like PerfView).

Upgraded stevedesmond.ca to @aspnet 5 RC (from b8), response time went from 20ms to 4ms. Not a typo. @DamianEdwards @shanselman @jongalloway

It's going to be a great year! Be sure to explore the ASP.NET Benchmarks on GitHub https://github.com/aspnet/benchmarks as we move our way up the TechEmpower Benchmarks!

What are YOU using to benchmark your code?

Sponsor: Thanks to my friends at Redgate for sponsoring the blog this week! Have you got SQL fingers?Try SQL Prompt and you’ll be able to write, refactor, and reformat SQL effortlessly in SSMS and Visual Studio. Find out more with a free trial!

I hope benchamrking will become as ubiquitous as unit testing.

What I would really like to see is an open source initiative to properly define interfaces with accompanying unit tests and performance tests making it easier for people to compare their implementations on a level playing field.

Ben
February 25, 2016 12:46
As a contributor of BenchmarkDotNet I just wanted to mention that BenchmarkDotNet will most probably support DNX451 and DNXCORE50 in the next few weeks. So stay tuned!

The motivation behind it's birth was interesting. They've integrated the tool in to the build pipeline to ensure pull requests and patches don't negatively affect performance.

But that project is morphing a bit and will probably be added to a suite that I'm making. Plus I need to find time to optimize the graph generation for memory usage, etc.

Mahmut Jomaa
February 25, 2016 21:56
A nice step towards the right direction. Now all it needs is # of allocations. That definitely helps to correlate that allocating unnecessary memory does have a dramatic affect on your benchmarks.

Corey
February 25, 2016 23:04
I have been using the Load Test Toolbox to find perf problems in web requests.

It puts out "nice-ish" charts too

mike j
February 26, 2016 5:50
This is awesome! I was writing my own data structure library for .Net and was curious how my code was performing compared to .Net's System.Collections.Generic versions. I used the StopWatch class to benchmark them, but this looks like more robust and feature rich. :)

With regards to # and amount of memory allocations, BenchmarkDotNet already has that see http://mattwarren.github.io/2016/02/17/adventures-in-benchmarking-memory-allocations/

Matt Warren
February 27, 2016 19:14
I use almost entirely ETW to truly benchmark and profile code at the same time. The library looks nice for micro benchmarks. I miss from the summary table first call effects. What if your method is only called once during startup but the JIT time is astronomically due to a JIT bug? If something is often called its performance is easy to measure. The most annoying user aspect of waiting for the application is startup. There all the pesky one time init effects hide which can become quite complex to measure.

BenchmarkDotNet has a "SingleRun" mode that should give you what you need. See this sample for how it can be used

Surya Prakash
March 06, 2016 5:56
We benchmark our code all the time. For serialization we have done this:
SERBENCH here are some charts:
Typical Person Serialization. What is interesting is that the most benchmarks provided by software makers are very skewed, i.e. serializers depend greatly on payload type, as our test indicated. Some things taken for granted like "Protobuff" is the fastest are not true in some test cases you see unexpected results. That's is why it is important to execute the same suite of test cases against different vendors. Sometimes benchmarking something is more work than writing the component, for example SpinLock class has many surprises.

Another thing that 90% of people I talk to disregard: SpeedStep. Try to disable it via control panel and dont be surprised that you get 25% perf boost EVEN IF you ran your tests for minutes. SpeedStep does magic tricks, it lowers you CPU clock even if the CPU is swamped, but not on all cores. Running tests from within VS(with debugger attached) can slow things down by good 45-70%. So I would say:
a. Test different work patterns
b. Build with Optimize
c. Run standalone (CTRL+f5)
d. Disable "Power Saver"/SpeedStep
e. Run for a reasonable time (not 2 seconds)
f. For multi-threaded perf dont forget to set GS SERVER MODE, otherwise your "new" will be 10-40% slower than it could
g. Profilers sometimes lie! They don't guarantee nothing. Great tools but sometimes they don't show whats happening and may be source of Heisenbugs

Albertson
March 30, 2016 19:35
Hopefully, this approach will become an industry standard one day.

Szymon Kulec 'Scooletz'
April 20, 2016 12:14
I saw matt give a talk on this last night and this is a great piece of software. One day performance testing will be as routine as unit testing is today.

Karl Gjertsen
May 18, 2016 8:30
What if your method is only called once during startup but the JIT time is astronomically due to a JIT bug? If something is often called its performance is easy to measure. The most annoying user aspect of waiting for the application is startup. There all the pesky one time init effects hide which can become quite complex to measure. harga mazda 2 , harga honda pcx 150 , harga suzuki address