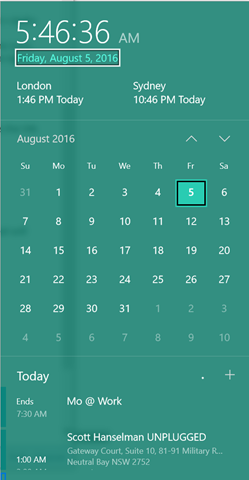 There's a fantastic list of Windows 10 shortcuts *inside* the Windows 10 Insiders "Feedback Hub" app. The in-app direct link (not a web link) is here but I think the list is too useful not to share so I don't think they will mind if I replicate the content here on the web.

There is also a nice support page that includes a near-complete list of Keyboard Shortcuts for Windows 7, 8.1 and 10.

"We asked our engineers on the team to share some of their favorite (and lesser-known) keyboard shortcuts for Windows 10. Here is the list!"

Capturing what’s on your screen:

For example, in a VM, CTRL + ALT + Left Arrow then ALT + TAB lets you get focus back and switch to an app on your dev machine besides the VM.

Here are some useful keyboard shortcuts on Surface devices:

What are YOUR favorite keyboard shortcuts for Windows?

Sponsor: I want to thank Stackify for sponsoring the blog this week, and what's more for gifting the world with Prefix. It's a must have .NET profiler for your dev toolbox. Do yourselves a favor and download it now—free!

Mike Ward
August 05, 2016 17:24
Just like to add that some of these shortcuts can differ depending on language.

WIN + Shift + <Left or Right Arrow>: Move currently focused window to the monitor to the left/right
WIN + Shift + <4,8,6,2>: Moves the currently focused window around the current monitor in a clockwise fasion, taking up just a quarter or half of the monitor. Each time you press one of the numbers, the window will resize and/or move position.
WIN + M: Minimize all windows
WIN + D: Minimize/Restore all windows

Alt + D, cmd, Enter: Open cmd.exe in the current directory. Also works for PowerShell (or pretty much any application, I like it for gvim too). The one down side to this is that the address bar will contain the path to the executable so if you go to copy the path from the address bar (e.g. Alt + D, Ctrl + C) you'll get the just run executable path instead.

Mike
August 05, 2016 21:25
Hey Scott, you need to convince someone on the Windows team to add a keyboard shortcut to move windows between Virtual Desktops.

As it is, they are useless!

Pablo Montilla
August 05, 2016 21:36
Another golden shortcut for those of us with multiple input languages is LEFT ALT + SHIFT - it switches current input language.

Daniel
August 05, 2016 22:55
Not shortcut related but StExBar is a nice toolbar for explorer that adds cmd prompt here, copy path, show extenions, and allows for custom buttons that can run scripts. Just thought I was somewhat related to the topic.

A shortcut I use a lot is Win+Space to switch between input languages. The Spanish layout sucks for coding and I need to switch to English for that kind of tasks.

Carlos Chacón
August 06, 2016 16:33
Do you have any wikis that document these or should I just start adding them to mine:
https://sterbalssundrystudies.miraheze.org/wiki/Keyboard_Shortcuts

Robert Sterbal
August 06, 2016 20:27
Not sure if I'm doing it correctly but those Win + X and other key do not work well for me. For example, cmd with admin rights - if I keep hitting that combo it will eventually open cmd but I get a lot of context menu and action windows opening in the process

Wish they wouldn't have changed WIN + C to WIN + Shift + C
Wish WIN + PRT SCR would be the keys to capture a WINdow.

Thank you for the list. Look forward to using: Alt+Y.
Nice to know about Shift + F10. My MSI keyboard doesn't have that key.

Cortana needs a simpler shortcut. I was thinking it should activate when you press the WIN key to bring up the start menu, you are in text search mode at that point anyway so why not also allow voice search at the same time (unless disabled).

chandra babu
August 09, 2016 18:00
@Eduardo: You can get a Microsoft Natural Ergonomic Keyboard 4000 with a dedicated Calculator button ;)

Those of us who used Windows 8 extensively had Win+C change substantially from a relatively light operation to pull out the charms to a somewhat heavier one that turns on Cortana's listen mode.

Nick
August 09, 2016 19:08
@Nick: I already own one, but it infuriates me when the calc pops up, but WITHOUT focus, so you start typing the numbers but nothing happens (or your currently open Word/Excel document gets all the numbers)

Eduardo
August 09, 2016 19:29
@Eduardo: Huh, mine usually comes up with focus, I'm guessing there's some weird thing going on where an application "holds focus" that prevents the new process from having startup focus.

Ctrl+shift+N -- in explorer with create a new folder with focus on renaming it.

pnp0a03
August 10, 2016 20:39
@Eduardo I also just noticed that problem after upgrading from Win 7 to Win 10 last week. I also use a Microsoft keyboard with a dedicated calculator button, although it is an older one (Microsoft Keyboard Elite for Bluetooth, circa 2005). It's an annoyance, for sure!

Gorm Jensen
August 23, 2016 22:28
I am really enjoying Win10 because it has some exciting features that I love most. by the way thanks for this article to provide new shortcuts which I didn't know :)