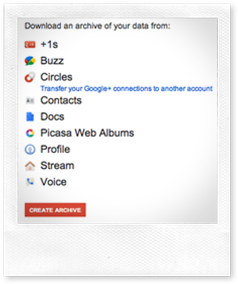 I'm a long time Google Apps for Your Domain (GAFYD) user. That means that hanselman.com email, calendars, etc is all handled by Google Apps. I've got dozens of other Hanselpeople (relatives and others @hanselman.com users) on this system and it works nicely.

When Google+ came out I signed up, but for the first several months the Google+ social network didn't allow Google Apps users to signed. Only Gmail.com users and folks with regular Google Profiles could sign up. So, most of us with Google Apps created temporary Google profiles or throwaway Gmail accounts in order to sign up. We were told that there'd be a migration tool "in a few weeks."

It's been almost exactly a YEAR from the first time this was announced. Last week they announced a migration tool via their "Google Takeout" system.

Fast forward several months and Google has announced the migration tool for Google+ users who want to migrate to another account. The tool is under the Google Takeout system which "Google Takeout allows you to download a copy of your data stored within Google products."

Unfortunately this new migration tool only supports downloading and migrating your Circles, but not your posts, comments or +1s. Compare this moving accounts or URLs under Facebook and Twitter, each of which allows you to change names without losing followers or posts/tweets/notes.

Even worse, my existing Google+/Google Profile account is already associated with all my blog's content on the Google Search Engine. This now makes one wonder if I move my existing authorship metadata to the new account will it work? Blog authors rely on rel="author" as a way to indicate their legitimate content is written by a human.

Posts and comments are not lost, they remain as they were - what is the case is that we don't rewrite history by changing the name above those comments. ie if you commented as "Scott Hanselman" then that name will remain above the comment / posts you did.

So - nothing is lost or removed, there's just the side note that we also don't go back and try to rewrite every post, every reply and +mention that was ever done.﻿

However well-meaning, I think Chris is missing the point of the audience who needs this feature. No one is trying to "rewrite history." We're just trying to move an account from one login to another. Even better if we don't need to change ANY URLs. I don't want to change URLs, move my profile or anything. I just want to login with different credentials.

Here's my response to Chris and Google, reprinted here.

This is a permalink issue not a "rewriting history" issue. I'm Scott Hanselman on a throwaway gmail. That's me here. I want to move to my Hanselman.com account where ALL my social media is (until g+). That is your primary use case and primary reason a GAFYD user would move. I want to simple change my login, from my perspective. For you, it appear this is a data migration issue as you're making week-long data moves. We just want to change a profile login.

Secondarily, I've got rel=author working nicely in google today. If I move, I'll need to change my authorship and hope Googlebot notices it in a few weeks. This is a perfect example were a 301 redirect from my old profile to my new one would go a long way.

Does this help clarify my position? I'm absolutely convinced this is the primary way folks would use this migration and I can say that all my peers and folks I've talked to expected a cleaner migration.

I want to move from my throwaway to a paid GAFYD account and it's [not really] acceptable to have hundreds of posts laying around NOT attached to my legit and primary account.

There are also a number of unanswered questions. What if someone finds some G+ posts from the last year and encircles my OLD account? Are they redirected? Likely not. I have hundreds of links pointing to my profile on the web. Why not 301 redirect those? Or, better yet, don't change the URL!

I believe that Google+ really needs a better system for their early adopters like myself. I've got a year worth of content and almost 40k followers on Google+ and I just want to login with my primary Google Apps account - the account I use for everything.

Daniel Sorensen
July 17, 2012 2:06
Not to sound snide, but do people still use G+ ? Seemed like a short term fad and everyone went back to facebook.

Stephen Hardie
July 17, 2012 2:18
One of the nastiest things about the way our social internet experience is that everything is a silo. I wish that some genius had come up with a method that allowed us to keep our nineties home pages as our primary internet identity and added notification features that supported the interconnected messaging we like in FB and G+. I've pretty much given up my old blog world – apparently you have, too – in favor of solutions hosted by companies that trap us.

Dave Winer has been talking about something like this. He's more interested in being able to post in a variety of places but keep his content in his own storage. That will allow him to retain and repurpose. We need additional protocols that somehow connect comments to posts but that also allow me to disconnect from everyone and still have my data.

Doesn't matter though. We have all accepted the corporate overlords. I hope you can talk some sense into the G+ people. Makes me glad I don't have 40k people invested though. As a loner, I'm less invested.

ps, Aren't you glad you didn't use the doppelganger as a credential provider. Another big risk factor.

tqwhite
July 17, 2012 9:54
Sounds like someone at Google made a design error. Why do people don't see the difference between a users credentials and a users system membership?

I'm currently the architect on a system that implements a seperation between credentials and the actual membership. This means I can attach different types of credentials (as long as I have a way to validate the provided credentials) and attach them to a set of authorisation rules and even attach an actual persons data to it. These three things are different sets of information to our system all together.

Google should have at least made a seperation between credentials and the profile (including any data attached to that). Sorry for you that they didn't.

Do people still use G+? Seemed like a short term fad and everyone went back to Facebook.

There are definitely people using Google Plus. It doesn't have the same network density as Facebook, but I have friends posting pictures and such. I prefer its interface to the crowded Facebook feed and the ugly timeline.

Michael Dudley
July 18, 2012 1:03
That is why Idecided to feel my pain before hand and I refused to sign up for google+ until I could do it with my Apps login.

Aniket Naravanekar
July 21, 2012 16:01
I just posted an update on my migration status. In short, a few users got moved over, some potentially got lost in the shuffle, but the majority are still on my old account, and no more notice that the migration is in progress.

I ran the migration against my accounts last week. It refused to even begin the migration until it had confirmed that the destination account had exactly the same name as the original account. i.e. both accounts had to be called Dan Makovec or the migration would no proceed. That negates this argument completely.

Just curious if you ever bit the bullet and used the migration tool... I've been putting it off to see how others responded, but after the initial flood of comments back in July, everyone seemed to go quiet on the subject.

I'm still hoping someday I can get rid of my temporary account... Maybe it just has to be ripped off like a band-aid, and move on.

Brandon Luhring
July 17, 2013 22:15
OMG, I have the exact same issue. I moved my g+ account to an other login. I lost all my authorship on my posts (I'm blogging at www.lotusmarketing.ca/blog) !! It's been 6 weeks now, and my authorship is not back in SERP yet. I feel like I shouldn't had made the move. So much problems.

It is stupid that you cannot change the email associated with the g+ account. I can feel your pain.