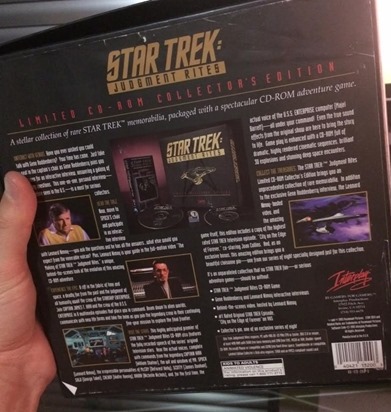 I was over at my parents' house for the Christmas Holiday and my mom pulled out a bunch of old discs and software from 20+ years ago. One gaame was "Star Trek: Judgment Rites" from 1995. I had the CD-ROM Collector's edition with all the audio from the original actors, not just the floppy version with subtitles. It's a MASSIVE 23 megabytes of content!

You can run Star Trek: Judgment Rites on Windows XP, but on newer operating systems that don't include DOS in the original way. Windows is no longer layered on top of DOS, although it can run some DOS apps with a virtual DOS machine (NTVDM) games rarely work. Remember things like running a Sound Blaster on DMA 1, A220 and IRQ5? Well, none of that exists anymore.

Enter DOSBox, a very complete x86 PC emulator that runs an amazing number of old games. It's likely that every old DOS game you have lying around will work great under DOSBox with a little tweaking. In fact, it'll be harder for you to get the games off floppy disks than it will to get them running.

I saw that Star Trek: Judgment Rites works great on DOSBox. There's just a few slightly non-obvious things to do to get it running (unless you read the manual. ;) )

After you install DOSBox, you'll note that there's a .conf ini file associated with your it. You can have a different .conf file for each game, then make a desktop shortcut like:

Disk drives in DOSBox are virtual and you need to "mount" them, so if you want a C drive in your DOS box, you'll need to tell DOSBox which of your directories you want to be the C drive within the Box.

For example, I did this

At the very bottom of the .conf file is a section called [autoexec] where you can add likes that will automatically run when DOSBox starts up, just like any autoexec.bat file. I added that mount line and then I always have a C drive within the box. 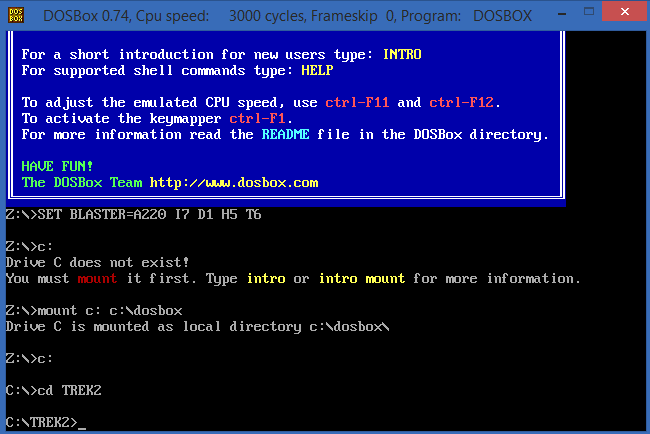 In this line, J is virtual and K: is my actual CD-ROM device with the physical Star Trek CD-ROM.

But messing with CD-ROMs is a hassle, so I used ISO Recorder for Windows, installed it, right-clicked on my drive and created a startrek.iso image file. Then, I changed my mount to

So now my startrek.conf has this at the bottom:

After running DOSBox with these disks mounted, I installed it using the original installer off the CD-ROM. 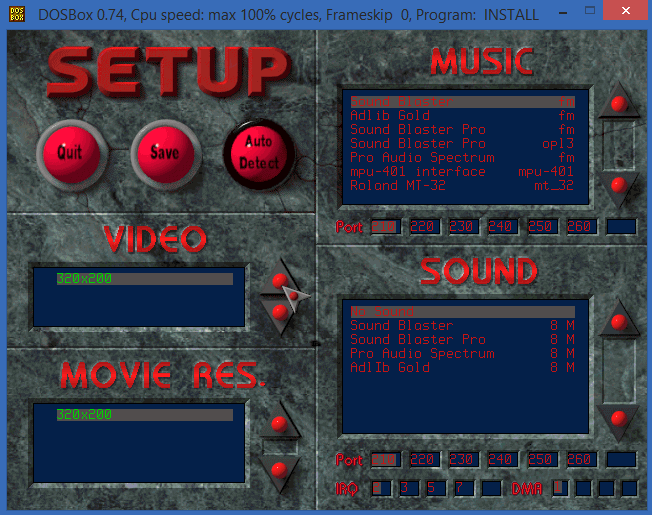 Now, I have a 30" monitor, and this little 320x240 game looks WAY too small. Also, it runs in a window, and I'd like it to run Full Screen and scale. I made these changes in my .conf file.

These are just the lines I changed to get the effect I wanted. The actual .conf is very large and has lots of options.

DOSBox is a great way to introduce your kids to older games that you have fond memories of. It's also a great way to get kids playing (what I believe to be) better and higher quality games that make you think and work at a different pace. If you haven't used it before, check it out at http://www.dosbox.com.

Jordi Espinosa
December 27, 2013 11:01
If you're interested in old (but great!) games, I would warmly recommend the ADG (Ancient Dos Games) podcast / vidcast: http://www.pixelships.com/adg/ In each episode Gemini reviews a DOS game and also gives detailed advice about the DosBox settings needed to run the game. Happy new year Scott!

Scott Muc
December 27, 2013 13:42
Oh, nooooo. I owned a game center for 13 years and sold it last February. We had hundreds of copies of scores of games that the new owner didn't want, so I kept them. I thought it would be great to play some again, but I became so frustrated with the install process I ended up giving them all away. Not that my wife minded. Great post, as always. Thanks, Scott.

bill
December 27, 2013 15:45
I agree with Scott Muc, GOG.com really is a great place to buy old games. They make the old games work just as they did back in their glory days.

Mark Harby
December 28, 2013 2:12
You've got to check out NaclBox! It runs in the browser with no security popups. One click with the latest version of Chrome and you're running. Here's Descent!

Bryan
December 28, 2013 7:02
If you're using SoundBlaster for music (and I assume you are), you're totally missing out. The best music option by far is the MT-32. However it's a little trickier to get MT-32 emulation working. First, you'll need to download a DosBox build with MT-32 emulation support from here: http://ykhwong.x-y.net/ Second, you'll need to obtain MT-32 roms. I have that in my skydrive account: http://sdrv.ms/19tKfJG . Get CM32L_CONTROL.ROM and CM32L_PCM.ROM and place them in the installation folder of DosBox. Third, edit your dosbox config file, and set the music option to be mt-32. Fourth, setup the game, and select MT-32 as your music device. Run the game and prepare to be amazed by how much better mt-32 is.

Omer Mor
December 28, 2013 8:19
DOSBox is really cool - I used it a while back to play my favourite 8088 game - the NBA game with Celtics vs Lakers at the front. Loved the game, love the emulator. For another option for some really vintage games look for Sinclair's ZX Spectrum emulator. eg this one (http://jsspeccy.zxdemo.org/) will knock your (and your kids') socks off. (it is also implemented in JS which is at the same time weird and awesome). Manic Miner is a nice arcade-yet-still-need-to-use-your-head-to-play game. There used to be another online emulator with tons of games for it. Another interesting thing that goes around these days is the Atari 4 Flashback, which looks like a cheap plastic knock-off of the good old atary. Comes with 75 games (including Space Invaders!) and two wireless IR joysticks (which I tried to hack to an arduino without much luck yet). My 4.5y/o is having some troubles wrapping his head around a Joystick and crappy visuals/sounds, but he likes it a lot still. for $39~ it was a terrific buy. One day I'll hack it into his SnapCircuit and my Arduino and we'll even have more fun

Ken Egozi
December 28, 2013 12:38
DOSBox is awesome. If you run Mac, there's a great frontend to it called Boxer which handles a bunch of stuff with getting games installed.

Damian Edwards
December 29, 2013 23:47
I've just invested in a decent second hand PC to run legacy XP software on. While DOSBOX does a great job of most Pre XP software, the lifetime of XP includes some fabulous games that I wanted to play. Elder Scrolls Morrowind has issues with Vista and later. Space Empires 4 and 5...in fact a load of games fail with Vista or later and that's sad. I have a Steam account with now 11 games that I used to play regularly that won't work with "7" (my current OS) Ebay came to the rescue for $140 I got what would have been a top of the line gaming machine ten years ago. Clean and really looking the part. Even had a full licensed Windows XP Professional disk included with the price (which - if you can still find one for sale - retails at well over half what I paid for the whole system) DOSBOX does a great job pre 2000 - 2000-2010 there are a whole load of games that need XP. Emulation, virtual machines? All have issues. Just having a PC run them exactly as they were run "back in the day" is my answer...until this PC breaks down. The sad fact is, as a self employed person who spends most of their life on a PC, there has been little or no functional reason to upgrade from XP. The bells and whistles that are added, touch screen with 8...none of it adds any value or efficiency to my work processes. It all just costs money, makes hardware and software that used to work redundant and takes a lot of time and effort to get back to where I was before. If DirectX11.1 worked fine on XP that would be it (and that would be gaming not business) The only reason DX11.1 doesn't do the job on XP is because M$ deliberately made sure it didn't. Therw is no functional reason why it shouldn't Even now - If Windows 8 offered one tangible thing I needed as a regular 60-70 hour WEEK pc USER (not A "power" user - just a heavy one. The inner workings of an OS are something that doesn't interest me or add any value for me or my business at all)... over XP then I could see the point of it...but it doesn't. Not one single new feature "8" offers is required by me over XP. It's just cost and effort. A Ponzi scheme with obsolescence built in.

Wesley Cabus
December 31, 2013 17:01
Great article, Scott; if you're interested in a graphical way to easily list and launch your games (uses box art), check out LaunchBox. Configuration is much easier with it too.

Jason Carr
January 02, 2014 1:51
As for COG it would be great if they would figure it out how to play empire earth on Windows 8

Joe Mele
January 05, 2014 1:54
Scott, Great article, another app that might come in handy for reviving retro games (at least the audio) would be VDMSound, I learned about it while trying to revive a copy of the original Tomb Raider, the Tomb Raider Chronicles web site has instructions on how to get it and how to try and resurrect some of Eidos' legacy titles.

CJ
January 22, 2014 22:18
Good old Dosbox! This blog made me dig into my digital archive and I found a lot of stuff I programmed back in the 1990s: and it *all* runs perfectly in Dosbox! Nostalgia! http://krumelur.me/2014/01/22/my-personal-digital-treasure-chest-how-dosbox-keeps-memories-alive/