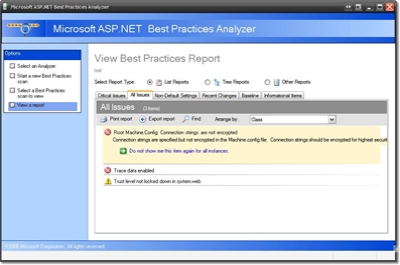 It'd be nice if there was some project inside (or outside) Microsoft to unify all "Best Practices" knowledge under one tool. Perhaps one of these tools is the beginning of that?

Now it looks like the "Best Practices Engine" is being abstract into this project at CodePlex called the Microsoft Best Practice Analyzer (BPA) and I think it's just a fantastic idea. It appears to be a clean up of the ASP.NET Analyzer from June.

It comes with a sample plugin that analyzes ASP.NET 2.0 applications. I pointed it at one of mine and it found a few problems with solutions that were right on on the money.

I really hope that this is the beginning of an integration into an "Enterprise Application Best Practices Analyzer," perhaps headed up by the Patterns and Practices team? I'd like one tool I can point to a system and say "is this cool?"

Thinking in the vein of Brian Windheim's statement that "the number of non-software artifacts in any project should approach zero," it seems to me that there's less usefulness in creating amazing documents (but still ultimately just prose) like this one on ASP.NET Security Best Practices if, in my words, "a Word Document has no teeth." Making a great document like that into a plugin for an engine like the BPA makes the manifestation of its intent an order of magnitude more useful.

If the BPA, all derivitives, and the patterns & practives Guidance Explorer were combined, I think the resulting tool would be truly amazing.