I really like the IIS7 team at Microsoft. They're cool people, but the what I like is that IIS7 is so freaking modular (I've talked about this at conferences before when showing how to use PHP and Ruby under IIS7 using FastCGI) that the group keeps bringing out new functionality as "OOB" or Out Of Band releases.

Bill Staples as a good post on how IIS7 ships software now. There's a big list of all the Release to Web (RTW) modules for IIS7. I demo'ed a the Bit Rate Throttler at TechEd and talked about it in a post on"Squeezing the most out of IIS7 Media Bit Rate Throttling which can help people save bandwidth money while hosting downloadable files/media.

This week the IIS7 team put out three new preview releases for download.

Application Request Routing is interesting. At first I thought it was like NLB (Network Load Balancing), that feature of NT 4.0 that used to be called "Wolfpack." I figured that the great Load Balancing Wars of the '90s were won, and the winner was hardware. I've used Cisco LocalDirector and F5's BigIP in my previous jobs.

ARR is basically a proxy module with load balancing capability that does its routing at Layer 7, rather than Layer 4. That means you make decisions at the HTTP level rather than the IP level. It sits on top of the URL rewrite module, so you can write routing or load balancing rules that can key off of HTTP Headers or Server Vars. You can do Client Affinity via cookie to differentiate between clients behind NAT.  These rules mean it could compliment a system that has an existing hardware load balancer.

If you're familiar with Apache, IIS7's ARR Module kind of combines the functionality you'd find in modproxy, modloadbalance, modproxyhttp along with some other goodness.

It's also a nice reverse proxy if you've ever wanted to do have a smarter IIS7 app router in your home to sit on the outside of your network and route traffic to machines or services inside.

For example, this screenshot shows a routing condition where we want to route folks who have .NET 3.5 on their systems to a separate server. Perhaps a beta site, or a site that has ClickOnce apps or some different functionality. It's totally up to you. You could route folks with certain cookie values, browsers, or  based on path requested. 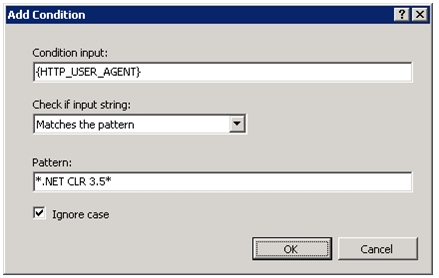 If we had 3 machines in the farm, one IIS7+ARR for routing in front and two other IIS7 machines behind it, I could write a rule that said "don't route requests for images." In this example, I'll have the /images folder served by the ARR machine up front instead.

It also has Health Monitoring to check on boxes being down, and you can decide what "healthy" means to you.

ARR is a free download and it plus into IIS7 Manager using the new UI extensibility stuff in IIS7, so it just looks like part of IIS and is managed the same way you manage everything else.

Check 'em out. I'm looking into how I can use ARR to expose my internal Subversion server in a more secure and easily configurable way.

We had a brief chat about exactly this at NDC 2008 - it's really cool to see this happening, looking forward to trying it out!

Scott Hanselman
July 16, 2008 20:45
Scott, do you know if ARR will support shipping of routing information across nodes? A single ARR server does not make a fault tolerant software only cluster but 2 of them , sharing that cookie based routing information/rules would.

Ian
July 16, 2008 23:26
Hi Scott,
You say: "ARR is basically a proxy module with load balancing capability that does its routing at Layer 7, rather than Layer 4 like most hardware load balancers."

Whether it's rewriting URIs or providing cookie-based persistence (what you're calling "cookie affinity", more appropriately known to most web administrators as "server affinty") this technology is well-established. Most "load balancers" have been capable of layer 7 switching since before the turn of the century. Load balancers such as those from Cisco, Nortel ,Radware, F5, and a host of others have not been relegated to "just" layer 4 load balancing for a long time.

While definitely cool, ARR is nothing new in the industry and, in fact, is fairly rudimentary compared to the advanced features found in today's "load balancers".

http://technorati.com/people/technorati/lmacvittie
July 16, 2008 23:37
Lori from F5 - Totally agree, I didn't mean to imply this was rocket science or the cutting edge of technology. Instead, I'm saying that doing this kind of thing continues to get easier and easier to the point where it's as easy as falling off a log, from download to install to configure. I had ARR running in 10 minutes.

To your point, I'll clarify that Layer 4 statement.

What is more challenging is sharing of states (which is probably what you were really asking). For ARR, there are two states are that most interesting: 1) client affinity and 2) hostname affinity. For the client affinity, because the persistency information is stored in the cookie, the ARR instances do not manage them. So there is really nothing to share. For hostname affinity, this is a problem. In CTP1, there is no support for this, but as we think more about the next release milestone, this is something that we are definitely thinking about.

Won Yoo
July 17, 2008 4:32
Thanks Won.
I was thinking state, but not ASP sessionstate, it was our downstream servers state. We use cookies to tie disconnected http connections back to connected tcp sockets (which are connected to a server that has state per connection).
So, obviously it's important that when a user sends more form data it's routed to the node that serviced them last time so that data can be sent downstream.
We have our own software cluster server that manages that, and I after using my brain for 2minutes I realized that ARR isn't doing any clustering services, it's merely routing requests but with such a plugable model I wonder if it's possible to add clustering type rules also? maybe through another plugin in the pipe?

As we look at cloud computing, what's avaliable in the MS stack becomes more important as it's harder to roll and deploy your own. If NLB understood state better perhaps that would be a more logical place to look for a full MS cluster solution (active/passive from the current cluster server obviously doesn't cover scale out) but ARR and it's 'rules' made me stop for a second.

Or, have I totally missed the point here? (very possible - it's been a long week already)

Ian
July 21, 2008 20:00
Please get with the vista team and get run as administrator added to the MSI context menu, here it's a pain to do this, unless there is a trick you could share that doesnt involve a command prompt.

I am doing URL Rewrite (Proxy Reverse) and when i am calling .html page its working fine but when i call .jsp page the ISAPI is blocking it (i am working on IIS 7) bcose i can see response 200 on the server.