I know little about IPTV other than I figure it's Television over the Internet. Heh.

Announced earlier this month was Microsoft Media Room, an update to Microsoft's IPTV platform. Long Zheng (fantastic blog) had the scoop four weeks ago when he noticed Microsoft trademarking it in Australia.

I'd personally really like to see Microsoft get this right. Remember UltimateTV? Microsoft's also been talking to Comcast (my provider) about Microsoft's Foundation software for a while.

There's rumor around that say that Microsoft's Foundation software will run on the craptaculous Comcast Motorola 3412 DVR. There's also word that Tivo's software can run on that Motorola 3412 as well. Either why, I needs me an upgrade. 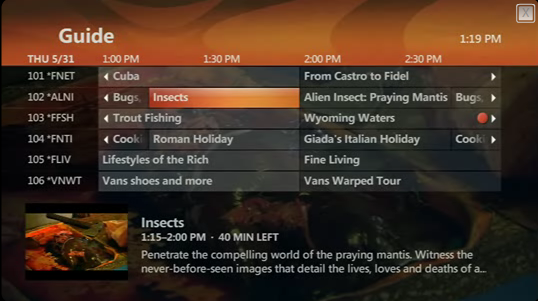 You can find a gallery of images of the Xbox 360 IPTV interface over at Engadget. It'd be interesting if someone put together a matrix of all the IPTV options out there so we could get an idea of what our choices are going to be in the future. There's already a lot of XBoxes out there, and I'm unclear as to what software will be running on what box.

For example, I have a Motorola DVR from Comcast, and an Xbox 360. I don't think this is an unusual scenario. I have Verizon FIOS for my Internet. IPTV comes out, now what? Do I run it on my Comcast DVR? Maybe not, perhaps I cancel with Comcast, and Verizon sends me a new set top box. Or, do I use the Xbox 360? If I want IPTV in another room do I go buy another Xbox?

I'd love for the XBox360 to take on this role. If you've never seen the Media blade with in the 360 or watched a download HD movie on it, you're missing quite a treat. The experience is butter. Truly. Even better is the Media Center integration on the Xbox.

The problem with all this isn't a problem my Mom will have. She'll get one box from her television provider and it'll work. No Problem.

It's me (I?) who will have problems. I just want to watch TV. How will I choose?

Either way, do head over to http://www.microsoftmediaroom.com and http://www.microsoft.com/tv and check it out. Click on Find Your Local Provider and you'll get a list of the providers that can offer Media Room today. Note AT&T U-verse is listed for the US. I've never heard of this service, and their ordering site is down, so I can't see if it's available in my area. 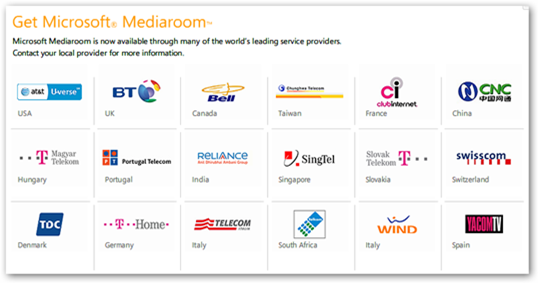 International (non-US) Readers, what's the word about IPTV and set-top boxes where YOU are?

Comment on this post [7]
Share on Twitter or Facebook or use the Permalink
June 29, 2007 18:38
Have you seen TVTonic? (http://www.tvtonic.com/). It has a nice MCML interface for Media Center that runs great on the 360 (much slicker than the RDP + HTML / WPF interfaces). Could be better of course, but it's an impressive start :D

I'm holding out for IPTV through Media Center... Wishful thinking?

Chris Cavanagh
June 29, 2007 19:53
Until these devices have the versatility of XBMC I will pass on them. There is nothing more frustrating than fighting with the DRM that is shoved down your throat by these device vendors.

It would be nice if Microsoft pulls this off and add another competitor to the market, like DirecTV did years ago. Or at least replace the crappy software currently on the ComCast DVR boxes with their mediaroom software. TimeWarner sold to ComCast in Florida a few months ago and so far the internet access has gone down three times in 20 days. And now they want to replace my perfectly good Moto DVR with some new version.

briankb
June 29, 2007 21:14
I just blogged about something similar. I'm looking to centralized all my media is one place. I didn't bother looking at IPTV mostly because I'm happy in my current provider.

Neuros also has some potential. However, everything seems to be in alpha version.

I bet we'll hear more about it at E3 (and it's probably no surprise that we're hearing about MediaRoom now, with E3 around the corner).

As a happy Xbox360 owner and frustrated Comcast customer, I'm hoping Microsoft does this right.

Bradley Landis
July 19, 2007 22:17
I am from Germany and I have a friend who is using the IPTV on a VDSL connection. The settopbox in use runs MS IPTV but not yet Mediaroom. it is expected "in the second half of the year" ... whatever that means ;)
anyway, except for the music streaming and picture viewer it is more or less the same thing.

I have seen it in action and there are many problems at the moment:

1. the content is streamed in h.264 which sounds good at first, but if you realize that the sources for those streams are usually DVB-S channels with low bandwidth, the result of a second compression is total garbage.

2. HDTV streams have acceptable quality... using about 12mbit bandwith, but it takes anywhere from 1 to 30s to switch to a protected (encrypted) hdtv channel... thats not what I call ultra-fast channel switching :(

3. due to the multicast there are problems if multiple boxes are connected at one household. the effect can be that all boxes are activated at the same time if one of them is programmed to record a show.