The Skynet Compute Cloud: I think there is a world market for maybe Five Computers 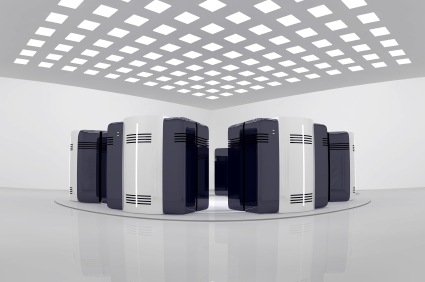 It's unclear who said:

"I think there is a world market for maybe five computers"

The thinking was that a number of large mainframey computers would be built and used by the world. That of course, didn't happen, as my watch has more memory than ENIAC did, and there's computers everywhere, but as the web continues to mature, I believe that things will conflate in the next 10-15 years and as more and more companies begin to

All this is building a collective trust with large entities like Amazon, and as prices fall with uptimes rising, more companies will say, "who am I to build a datacenter? I'll just host in one of The Five."

Here's a list of services (by no means exhaustive) from Wikipedia's Utility Computing article, as of today:

I believe this list will likely turn into The Five Computers:

This "5th computer" will be the "remainder" after the first four, but might ultimately become the largest. Perhaps it's a larger number, but surely Amazon will buy Bay at some point, and Google will buy Salesforce.com, so they don't count.

Computing will be moved into the Cloud. It's already happening, we're 20% there. The idea has been around since the beginning, and it will, in my opinion, continue come up until it actually happens and we build Skynet. One of these compute clouds will no doubt end up in orbit.

Comment on this post [7]
Share on Twitter or Facebook or use the Permalink
June 26, 2007 6:24
Um, isn't #5 just google, if they worked out how to work over a slow link? A large array if inexpesive and vairying-powered machines, on a network. The only difference is that google has them in one data center. Put FTTH into the mix, and put some redundancy in, and you have google. :)

Nic Wise
June 26, 2007 13:45
Great post. The issue however is portability, we are not infrastructurally neutral as our data resides somewhere, hence we have a relationship with our infrastructure. This means there is an exist cost associated with any cloud unless we can move our applications and data from one cloud to another cloud with ease. The key to this is open and free standards - so whilst I agree we will eventually end up with a small number of large computing clouds, it is more advantageous to end consumers if it becomes an Amazon EC2, Google EC2, Microsoft EC2 etc or some other such standard.

Simon Wardley
June 26, 2007 14:17
Maybe that's the case in the States, but elsewhere there are concerns about data protection that I don't really see being addressed - why should we, as individuals or companies, trust those third party companies? Or their employees?

In the EU (I'm in Scotland), one of the eight principles of data protection says that we should not transfer personal data to countries without adequate data protection legislation - which rules out using third party servers in the USA without Safe Harbor status or an explicit contract, if we are going to store any personally identifiable material. Note that this could include something as simple as name and address, if you use an online wordprocessor or spreadsheet to prepare an invoice.

Individuals can make a personal choice to trust, of course, but the legislation applies to pretty much any organisation, including clubs and societies.

Isn't this something that concerns you too, even though you don't have the same legal requirement to consider it? The Cloud, in particular, would be a nightmare for this sort of consideration.

John Evdemon
June 27, 2007 6:21
Interesting post, Scott, as always. Re. Gavin's comment: We're certainly concerned with security on this side of the pond, too. I would think, though, that we would be more likely to let the market dictate those security concerns than to create a legislative mandate.

If word got out (as it certainly would) that Cloud A's security story was lacking, that would prompt customers to move over to Cloud B or C, assuming a relatively painless transition from cloud-to-cloud a la Simon's comment. Then Cloud A would be under just as much, if not more, pressure to bring security up to par than if obliged to by law.

And if you weren't satisfied with what any of The Five had to offer, you could always choose to keep your computing "landside," as it were.

There is a number of issues hosting the other side of the pond, and although I believe they will eventually be resolved through continuing technology advances, advanced data management, and strategic alliances (for world wide coverage), there is at least one alternative in the UK at the moment, which isn't listed above.