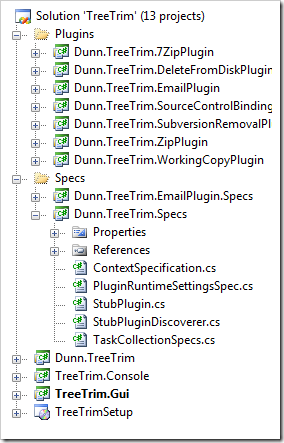 Many years ago, Omar Shahine wrote a great little app called Clean Sources. It added a right-click menu to the Windows Explorer that would delete your bin, obj and setup folders.

Later, Jeff wrote Clean Sources Plus. It added a "Clean and Zip" option as well as support for removing source control bindings.

Now, Steve Dunn has extended these to create Tree Trim, a command-line tool to do all this and more. He's extended it to include a plugin model that creates a little pipeline of plugins. You can chain them together and extend the command-line with your own plugins, and MEF (Managed Extensibility Framework) is at its core.

Tree Trim is convenient for build servers where you want to, for example, make a working copy, delete source control bindings, zip stuff up, email it, etc.

It's significant that order of arguments matter, so the args cause the plugins to run in order, like "make working copy, delete bin/obj, zip up, email."

Make your own Plugin and be MEFy

He's got an IPlugin interface:

When you make a plugin, you need to let MEF know that it's available by Exporting the type:

Then any plugin in the same directory gets pulled into a list of plugins...

The app kicks off this little pipeline by passing the command line args in along with the plugins found:

The code is actually very easy to read and is up at TreeTrim on Google Code and check out the FAQ. Plugins are super easy with MEF and Tree Trim has some good examples of a number of things. First, just plugins in general, but also a technique for passing settings to plugins.

You can easily create context menus in Explorer for this tool (or any tool). Add a Key to the Registry like below.

Then in the (Default) string value, put it something like this (for example):

Here's how it looks in registry:

Steve is also starting to setup tests using XUnit. He's starting to use the ContextSpecification Pattern for his tests, so it'll be interesting to see if he completes the tests. That part is pretty basic so far. Check out the TaskCollectionSpecs.cs as an example.

All in all, fun to read, and an interesting tool I'll use to quickly clean and send code samples around. I may extend it with a plugin to upload to my blog, then put the link in the clipboard. That could make blogging samples easier.

https://www.google.com/accounts/o8/id?id=AItOawmClRXStDShusz2prTS20XmGthC_4a6CqQ
May 22, 2009 9:16
You shouldn't add your registry key to Folder, but to Directory. Folder includes non-file system folders, such as control panel and the recycle bin, and the tool won't work on those. So, just register it under:

If the plug-in occupy less resource, it will be better.