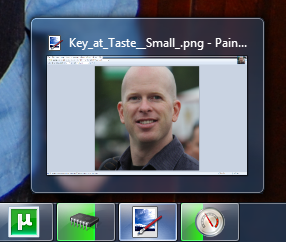 It's funny to watch things go viral, even just a little viral on the Internet. Here's what happened, but more importantly, we'll talk about the code. Let's also make it complete clear that Jeff Key rocks. See picture at left, in between his two "lame" creations."

First, I did a post earlier this week called "Light it Up: List of Applications that use new Windows 7 Features." A day or two later I got an instant message from my former-roommate and part-time belay Jeff Key (@JeffreyKey on Twitter) (actually, that's all a complete lie, but, Jeff and I are friendly acquaintances for many years and have each other on IM) that said:

Saw your Win7 features post yesterday, so whipped this up last night and posted it on codeplex this morning:

http://taskbarmeters.codeplex.com/ kind of lame, but that's how i roll 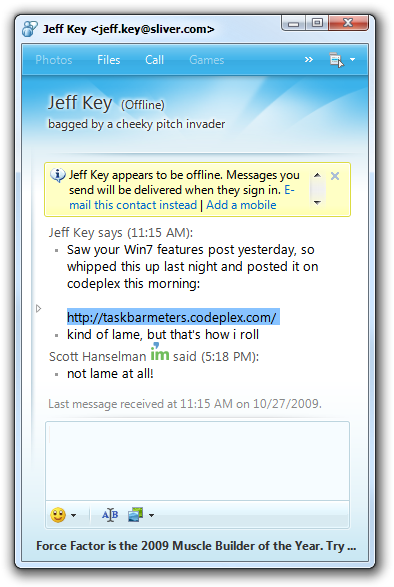 For years Jeff has lived the mantra "Talk is Cheap, Show Me the Code." And he does, with some of the most inspired little .NET-based utilities out there asking for little else but our undying admiration and gratitude. That is how Jeff rolls. I visited his CodePlex site and saw it had 11 downloads.

Why would Jeff be so down on himself and say the code is "lame" when clearly people were (are) going bananas and downloading these little utils? Well, because it's so darn easy to do, this was likely the source of Jeff's intense guilt. ;) The Windows API Code Pack makes it easy.

ASIDE: In fact, WPF on .NET 4 makes it even easier because it includes the new TaskbarItemInfo class that lets you do this from XAML. Pete Brown from my team has a great write-up on Showing Progress in the Windows 7 Taskbar with WPF 4 on his blog.

First, since his apps are specific to Windows 7, he checks first to make sure it's OK to continue. Note that it IS very possible to make apps that work great from XP to Windows 7, but these apps are little Windows 7 showcases, so you can see why he'd want to check for this:

To update the Taskbar (Superbar) Progress Bar he wrote a little helper because he wanted the colors to be green, yellow or red depending on the value of the CPU usage or Memory usage:

Then he just sets up a little System.Timer love and sets the Progress Bar values appropriately for Memory...

Jeff also adds some JumpLists to launch Task Manager or Resource Monitor on right-click as well. Nice touch! A little polish there. 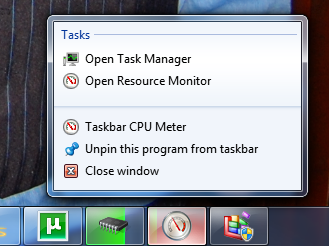 A day later, @ScottMuc tweeted me about adding a Disk IO Meter and we went back and forth about it on Twitter. He eventually submitted a patch to CodePlex. While Jeff hasn't updated his code with that patch (maybe he'll make me an admin and I can do it), I'm able to patch my local copy, of course.

Useful Link: Example: How to contribute a patch to an Open Source Project

Downloading ScottMuc's patch and simply right clicking (using Tortoise SVN) and clicking Apply Patch gives me a new TaskbarDiskIOMeter project that I can then add to the larger solution. The only problem with the patch was that it refers to a binary file called Drive.ico that didn't get included in the .patch file. I found one and added it and now we've got a Disk IO monitor as well. :)

(I didn't know that patch notifications where turned off by default(!) for administrators. Fixed that too.)

Btw Scott, the link for Life Rocks is incorrect ;)

http://mohib-sheth.myopenid.com/
October 30, 2009 10:20
Heh, the funny thing is that I wouldn't even bothered trying if you didn't simply give me that little nudge on twitter! Thanks for the mention.

Scott (yet another developer named Scott)

Murtaza Iqbal
October 30, 2009 11:55
This is pretty cool and relatively clean IMO given that it's not built in. Still excited for .NET 4.0's wrapper classes.

MS shouldn't have hidden away the notification area in 7 - it was useful for this sort of thing, e.g. a minimized Task Manager instance.

Still, a good example of coding for Win7 in .NET.