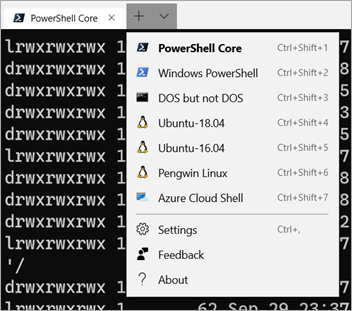 I posted recently about What's the difference between a console, a terminal, and a shell? The world of Windows is interesting - and a little weird and unfamiliar to non-Windows people. You might use Ubuntu or Mac and you've picked your shell like zsh or bash or pwsh, but then you come to Windows and we're hopping between shells (and now operating systems with WSL!) on a tab by tab basis.

If you're using a Windows shell like PowerShell because you like it's .NET Core based engine and powerful scripting language, you might still miss common *nix shell commands like ls, grep, sed and more.

No matter what shell you're using in Windows (powershell, yori, cmd, whatever) you can always call into your default Ubuntu instance with "wsl command" so "wsl ls" or "wsl grep" but it'd be nice to make those more naturally and comfortably integrated.

Now there's a new series of "function wrappers" that make Linux commands available directly in PowerShell so you can easily transition between multiple environments.

This might seem weird but it allows us to create amazing piped commands that move in and out of Windows and Linux, PowerShell and bash. It's actually pretty amazing and very natural if you, like me, are non-denominational in your choice of operating system and preferred shell.

These function wrappers are very neatly designed and even expose TAB completion across operating systems! That means I can type Linux commands in PowerShell and TAB completion comes along!

It's super easy to set up. From Mike Battista's Github

You'll do your Install-Module just one, and then run notepad $profile and add just a that single last line. Make sure you change it to expose the WSL/Linux commands that you want. Once you're done, you can just open PowerShell Core and mix and match your commands!

From the blog, "With these function wrappers in place, we can now call our favorite Linux commands in a more natural way without having to prefix them with wsl or worry about how Windows paths are translated to WSL paths:"

It's a really genius thing and kudos to Mike for sharing it with us! Go try it now. https://github.com/mikebattista/PowerShell-WSL-Interop

Unfortunately, too often I have to fix some hot-shot developer's idea that using a set of third party command line tools on the 24x7 production server is a good idea.

For production systems, build steps, data extracts, reports, etc all of which are production work, my team goes with Windows built-in commands with no add-ins and no third party executable code. It gets us 99% of the way there.

It's why you don't remove the engine from your newly purchased car and replace it with one from a jet airplane.

How can programmers not see this plain common sense notion?

The smallest implementation that I have found is the BSD-licensed mksh port in Cygwin. Just pull mksh.exe and cygwin1.dll out of the /bin, and run them on any Windows system.

Combining this with the Win32/64 port of busybox (using mklink flesh out busybox all its aliases), and this creates the smallest footprint for a UNIX userland - two programs and one library.

Charlie
October 14, 2019 21:17
Combining this with the Win32/64 port of busybox (using mklink flesh out busybox all its aliases), and this creates the smallest footprint for a UNIX userland