If you enjoyed this post, or this blog, please make a secure tax-deductable donation to the American Diabetes Association. Please read my personal story about life as a diabetic and donate today.

Welcome! You might want to check out my greatest hits. 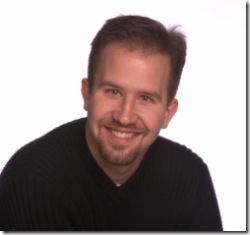 My name is Scott Hanselman. I'm a web technologist and teacher. I work out of my home office in Portland for the Web Platform Team at Microsoft, but this blog, its content and opinions are my own.

I was the Chief Architect at Corillian Corporation, now a part of Checkfree, for 6+ years. I was also involved in a few Microsoft Developer things for many years like the MVP and RD programs and I'll speak about computers (and other passions) whenever someone will listen.

Before Corillian and Microsoft I worked as a Principal Consultant at a local Microsoft Solution Provider called STEP Technology, speaking, writing, consulting, and very much not getting rich during Web 1.0. Even earlier, I worked at a Car Parts Data Warehouse called Chrome Data, and before that I had a small company that specialized in internationalization and thunking. I've also been an Adjunct Professor at OIT, teaching C#. On the side, I created the first PalmPilot Diabetes Management System in 1998 and sold it to a healthcare company five years later. It's now in limbo, but I'm trying to get it released as Open Source.

I am an early adopter, it seems.  I ran Tweak Computer Support BBS, with some success, a very long time ago. I was a FidoNet node. I have nice teeth and love cheese amongst other things. I like Tools, and I've co-written some books. I'm diabetic. I like studying Amharic and Zulu/Ndebele and listening to African Music as well as other more diverse music. I know Black Hair and can both braid and cornrow. I have a podcast. I hack on hardware and waste time. I do Open Source. I have a large forefive-head. I am good at Excel and keep my resume mostly up to date for no reason. We speak Sign Language to my son and my wife speaks Ndebele. I have a great family and have had great teachers and a fantastic wedding with a great Cake Topper. I don't sleep too much. I write a lot. I'm trying to raise $50,000 for Diabetes research.

Haacked
June 28, 2007 16:43
When Scott says he'll be different tomorrow, he really means that he'll have learned at least one new programming language, one more spoken language and have created a complete Nuclear Power control system with PowerShell. The only reason he doesn't accomplish more is because Corrillian only gives him an hour for lunch.

* They say he sneezed one day and out came LINQ.
* Scott Hanselman doesn't sleep, he spin waits.
* Early versions of the C# compiler were simply emails to Scott.
* He knows the address of garbage collected objects.
* Scott doesn't deal with threads in his code, he uses titanium chains.
* Scott writes client server programs concurrently. Client code with his left hand. Server code with his right hand.
* Scott sees dead people.
* He once debugged a program he had never heard about. He just sent an email to Timor in Russia with the message "Check line 2341 of OrderForm.aspx.cs. You forgot to call the update method." He was right.

When are you making your decision on google apps? Blog about the feedback.

P.S. I still think you will have to worry about backups. Link.

Henri
June 28, 2007 23:48
So you do standup eh? Do you have any recordings you'd be willing to publish? If the banter between you, Carl, and Rory on .NET Rocks! is anything to go by, it should be pretty amusing. Perhaps you could start your own comedy podcast. You could call it 'Tuesdays' or something original like that.