Get Involved - The Video

My friend Rob Conery and I work on the This Developer's Life podcast together. You should check it out, we work well together. Last year we created a Technical Speaking Tips Video and launched http://speakinghacks.com on Rob's TekPub site. 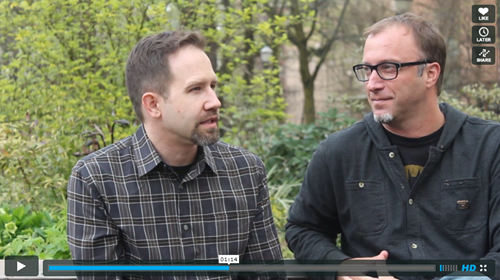 Since then I've done a little more moonlighting on the side with Rob and release not just The Art of Speaking but also done other episodes with Rob including a regular show called "The Source" where we explore the source of popular open source frameworks. Again, you get all of this with a yearly or monthly subscription.

Today we're launched our most ambitious project yet. A meticulously edited episode that's almost TWO HOURS of video content where we cover everything we think a developer should know to "Get Involved" in the developer community.

If you're a fan of This Developer's Life you know how tightly we like to produce things - this video is no exception. Filmed on the streets of Portland and at a Portland user group, we talk about Blogging, Twitter, Github, StackOverflow, Open Source, Speaking, User Groups and Conferences - all of this hoping to make you a happier, more productive, more connected developer. We want to inspire you and perhaps to take your career to the next level.

Additionally, we stretched far beyond Portland to seek out the other people who are very active and well known in the social arena like Jon Skeet and Jeff Atwood:

We put an immense amount of work into this production and I really think you'll enjoy it. You can buy it "ala carte" or as with all Tekpub productions you can get a one year subscription and get access to everything on Tekpub including this video, my speaking video, my show The Source as well as my episodes of Full Throttle with Rob PLUS dozens of other videos on new tech like Backbone, Async C# 5.0 with Jon Skeet, ASP.NET MVC with Sam Saffron, RavenDB with Ayende Rahien, Mastering jQuery, and on and on.

I hope you enjoy this show. We poured our hearts into it.

P.S. Here's a 10% discount coupon if you only want the video alone: KQWFCJUE0SPO

Is the goal of this website to be something similar to Pluralsight videos which is targeted towards devs?

Andrew B
June 07, 2013 4:35
Great vid, been waiting for this one for a while. Nice to see the streets of home along with the excellent content.

I do a good number of the things you cover in the video, and learned a few new approaches as well. It is encouraging that I'm headed in the right direction.

For me, the challenge is that I am an enthusiast/self-taught coder. It's hard to find a topic which doesn't feel like I am replicating dozens, if not hundreds, of similar posts by people more knowledgeable than me. Because of this, I try to write the post I wish I had been able to find, after combing several different sources trying to figure something out. And I try to relate my learning experience, as I am certain there are others like me, with no formal schooling, trying to figure it out on weekends and evenings, with Google.

Giving credit where it is so obviously due, it is people such as yourself, Rob Conery, and the myriad others who put themselves out there and share what you know that make it possible for people like me to "get involved."

Thanks, and keep up the great work.

thanks for your inspirational work!
Looking forward to watching this video.

Wolfgang Ziegler
June 07, 2013 12:20
This Developer's Life has no new episodes for several months now - is there still a Life?

John - I hear you. Sometimes I avoid reading other blogs so I *can* write stuff without thinking about if I am replicating something or not.

Anton Troshin
June 07, 2013 17:14
I had bought your video - "The Coffescript talk" earlier. This time I was so excited that I read your blog half way, bought the video and then got back to read further - only to realize there was a 10% discount. LOL :)

Is this captioned or is there a transcript available somewhere? Being deaf means screencasts are sadly not as helpful for me as I'd like. :(

On that note, one of the things I've really appreciated about Hanselminutes is the availability of transcripts a few weeks after the fact. Do you have any plans to eventually do that for This Developer's Life?

David Edmiston
June 09, 2013 0:14
Awesome Video! So many Devs try to insist that presentation doesn't matter. It does and you rock. Keep on keepin-on.

Dan Kline
June 09, 2013 13:13
Very insightful and thought-provoking video, Scott! The first one I bought on Tekpub, but I am sure it is not going to be the last one. Wonderfully produced, edited and put together. Great job all around!

Tips I learnt from the video, which I didn't know before:

Your twitter timeline is a stream of data, feel free to ignore it and don't care if you lose interesting nuggets of information once in a while. I think this extremely important. A lot of close friends make a point to read every tweet in their timeline, and to me, it feels like a colossal waste of time.
Play around with blog titles and don't mind re-editing your post after it is posted. I've been extremely fearful of editing my post after-the-fact because some people might've already read it. But the video showed that it is not a bad thing.
If you want to be taken seriously, post an original picture of yourself looking straight at the camera. I think we're well past the point of being afraid of the big bad web, so everyone who expects to be more involved should be doing this. The tip on choosing a display picture was funny but true.

In general, the concept of getting involved is great. I've been trying to do just that over the past few months and already feel liberated. This video couldn't have come at a better time for me.

However, I do feel you guys missed a trick when you were talking about public speaking. I think the best way to get speaking is by publishing screencasts on Youtube. I am planning to do that just now and am already looking into your screencast-related posts for tips. If you're afraid of public speaking, the easiest thing to do would be to get a mic and record yourself and post it in Youtube. The worst thing that could happen is no one sees it and you're safe from humiliation (in your mind). The best thing is that others find it helpful and want more from you. It is very similar to what you said about blogging.

One of the things that you could address in a future video is how to come out of your shell if you're naturally an introvert. I feel a lot of the same tips will still be applicable, but it is going to be that much more difficult for an introvert to get involved. If you could do something like that, it might be a great addition to this video.

For some reason the price tag seems a little too high. I know Tekpub is Rob's job and I do think most of the content on Tekpub is worth the investment, but I really think this one should be free, nearly free, or with a freemium option, because of the content covered in this video: stack overflow, blog, twitter, open source, github. All these stuff are free. And these products and services helped to create a welcoming environment in the community. In my opinion, making the video less expensive would have a similar effects. That is just my opinion, please do not feel offended.

BTW I am also a big fan of This Developer's Life. Best podcast ever.

Just anothe developer
June 12, 2013 23:58
Sorry that it's not free, but it took a LOT of work to make and if I give EVERYTHING away for free then Rob and I can't eat. Perhaps you'll find if you get a monthly subscription that there is actually THOUSANDS OF DOLLARS of value for you there...for a small price.

Not everything in the world is free. If you provide value, don't be ashamed to charge money for it.

Maybe this is a stupid question but I'll ask it anyway =)

On the Tekpub page for this video it says $26.00. Is this the price of every individual video or for the entire series (assuming this is a series like This Developer Life)?

To help with this problem...

"John - I hear you. Sometimes I avoid reading other blogs so I *can* write stuff without thinking about if I am replicating something or not."

...you could try what one of my old CEO's does on his blog.

He does a thing called a "blindpost".

He reads the title of a post and writes his version of it, THEN compares. He calls out he's doing it, so no guilt, no fuss, no muss :)

They usually work out pretty well...