I paid for Beyond TV 3.5 and a Hauppauge PVR-250 on my main desktop machine a year before I made a Media Center PC. Interestingly, the Media Center PC has turned into a heavy MAME arcade machine and is rarely used, if ever, for TV. Perhaps that will change with the XBox 360's new Media Center Extender (as the original XBox Media Extender sucked egregiously) but we will see. Until then, I keep ending up watching TV on my main PC, using Beyond TV. So, it made sense when Beyond TV 4.0 was release a few days ago that I give it a trial. Here's a few impressions

The upgrade from Beyond TV 3.5 was a complete fiasco. Not failure, fiasco, there's a difference. During the setup I was informed that a number of .ax files (.ax files are actually just COM DLLs that have a different extension. They are codecs for the decoding things like video and audio.) were in use can couldn't be overwritten. My options were "Retry" (Um, can't!), "Ignore" (Um, dangerous!), and "Cancel" (Um, and do what?), so I, like a putz, selected ignore. In retrospect I should have selected Cancel and figured out who was locking the files. But, I charged on.

Interestingly, to me at least, Beyond TV 4 decided that it was cool to put itself in the existing Beyond TV 3 folder called c:\program files\snapstream media\beyondtv3. Since it's not version 3, that seemed ingenuous, but perhaps I'm being too hard. Either way, it failed to start up and was unable to show video. The install was hosed at that point.

Turned out that since I'd just tried a Web Cam conversion using the new MSN Messenger 7.5 and a little QCAM USB Gooseneck camera I picked up, that MSN Messenger had loaded every registered codec on the system into msnmsgr.exe's memory space. So, I blew away Messenger and figured I'd just run the installer again and select "repair." Which would have totally worked had there been a "repair" option.

Long story short, totally uninstall and reinstall of 4.0. Afterwards though, it started fine. 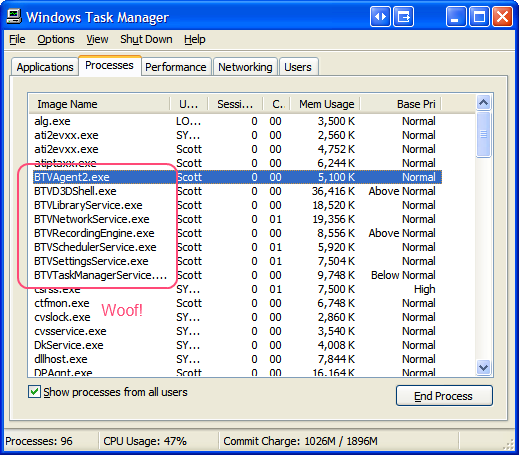 Color me dorky but I always like to check out the system footprint of applications I run. Even more so since I started running without a paging (virtual memory) file.

Points to Snapstream for prefacing all the new processes with BTV*, but still, EIGHT processes? Um, ouch. Of course, who am I to complain considering that Microsoft released a whole new OS. (Yes, I know that's not totally true, but it's true from a marketecture point of view, so phooey on you.) There's also an extensive, but confusing series of COM interfaces that Clemens has seen fit to mess with, although there's also a Web Services API. We'll see what happens with that.

Chunks of BeyondTV are written in .NET 1.1 and there's no fewer than 28 .exe.config files that remind .NET that BeyondTV prefers .NET 1.1. There's over 130 DLLS and 30 EXEs that make the whole thing happen. It's a pretty complex goings on, but fortunately it's all in one folder and its footprint hasn't affect anything other than my curiosity. I've found it to be fantastically stable if a bit of a memory hog, but certainly less in total than any single Microsoft Office program.

All in all, it's a great product for the money despite my complaints. I used Beyond TV 3.5 daily for over a year without trouble, and I'm confident Beyond TV 4 is an improvement on 3.5. The MAJOR feature that was added in Beyond TV 4 that I wasn't able to test is its support for HDTV. I had an ATI HDTV All-In-Wonder but it was such a complete piece of crap that I took it back. Perhaps I'll try to get my hands on some of the newer generation HDTV cards and add to this post.

If you've got an existing machine and you're even slightly thinking about a Media Center PC, just spend the ~$150 and get a Tuner/BeyondTV bundle. Seriously, I know lots of folks out there who are looking seriously at MCEPC's for more than $1000, but could really save some money with a simpler product like Beyond TV 4.

Comment on this post [4]
Share on Twitter or Facebook or use the Permalink
November 13, 2005 14:32
Two other pieces of software that I think everyone should evaluate when considering rolling their own HTPC: MediaPortal and GB-PVR. Both are written in C#, both are free, and both are commercial quality!

MediaPortal is open source and derives from the XBMC project. Source code is hosted on SourceForge:

GB-PVR is closed source (maintained by one guy in New Zealand), but still free, and has an open plug-in and skinning architecture. (Be sure to check out the Solitaire plug-in [wink]):


GB-PVR is also very popular as the server component for the Hauppauge MVP:

JasonF
November 13, 2005 16:14
In defense of ATI, I use a Radeon 9800XT at home with the latest Catalysts, Radeon Mobility 9700 on my laptop with a pretty old driver version (mid-2005 I think) and conversely use a GeForce 9200 at work. Within 6 months of buying the 9800XT (which was about two years ago) the stability of the Catalyst drivers has got on par with NVidia drivers, and performance steadily increased between versions.

In short, there are no stability issues per se with ATI drivers, certainly not more so than with NVidia drivers. (We use both NVidia and ATI cards at work in dual-monitor configurations; NVidia has a minor usability advantage here, but the ATI cards are rock-stable.)

Gotta love that- the XP default settings will reboot on a bugcheck instead of showing you the bluescreen. If you like investigating that kind of thing (or at least verifying that the faulting module was what you thought), shut off "Automatically Restart" under System Control Panel->Advanced->Startup and Recovery->System Failure, and you'll see the familiar old BSOD. 'Course that sucks when your machine bugchecks and you're not home to kick it, but it's nice for troubleshooting...

Matt Davis
November 15, 2005 18:05
A very fair and balanced review of our product. I'm really glad you enjoy BTV4 =) That M$ bug is hella annoying, even for us developer here at SnapStream (who ironically enough use MSN messenger to chat with each other ). Another thing that you might enjoy is our selection of plugins for BTV 4: http://forums.snapstream.com/vb/showthread.php?t=27885 . We will be releasing a more organized sub-site of snapstream too that will make 3rd party development even easier once the BTV 4 sdk is stabilized and the higher ups give us an ok. So I hope you can expect to see more plugins and skins in the future!