The Wife was stressing out because the sheer number of people we were sending Christmahanakwanzika cards to this year. She usually handwrites out the envelopes, but there's just too many now. I suggested cutting back, or using email, and was prompted put in my place.

I suggested a Mail Merge, and while The Wife is a competent Microsoft Office user, the Mythical Mail Merge is still out of reach. I don't think I've met a non-programmer who has pulled it off. It's a shame really, especially when it comes to envelopes.

The goal was to get 100s of cards out in about an hour, with a small 3-day pause in the middle as we waited for the cards to show up from Shutterfly.

This was easy. We had a 4x8 card made at http://www.shutterfly.com, which I've been using happily since Day 1, by the way. They are cheap and fast and reliable.

Step 1 - Get the Names and Addresses 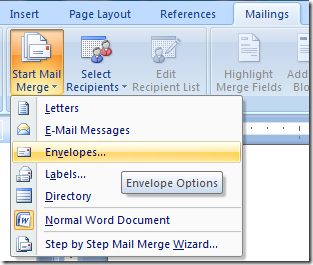 We used to have everything in Outlook, but you know, things get messy. We ended up making an Excel Spreadsheet that ended up on the web as a Google Spreadsheet. We pulled addresses in from all over, Evites, emails, old envelopes, whatever. The goal was/is to collect all the times. We used the really simple format Name, Street, and one single CityStateZip field, rather than splitting things up with the whole City, State, Zip. We have a lot of international people, so it was easier.

We saved the spreadsheet as a CSV, but Word doesn't really care...it can read most any kind of data. We could have just saved it as a XLS file.

Step 2 - Start the Merge in Word

You may hate Word 2007 and the new Ribbon, but it's REALLY growing on us. Click Mailings, then Start Mail Merge. Select Envelopes...Pick your envelope size. Select the file with your recipients/relatives in it. I selected our CSV.

Step 3 - Lay out your Envelope

Next, click "Address Block" to put the address in your envelope.

This next part is the MOST important. Click "Match Fields" and make sure that Word figured out where you want things to go:

Here I had to tell Word about my funky mapping (that we had only one field for City, State, Zip).

Click OK, and preview your document. If you like it, stack your envelopes up in your printer and print your holiday troubles away.

This might seem like a trivial or silly post to you, but The Wife thought it was about the greatest thing she's ever seen. It's funny how I've got the whole house networked, we've got video streaming from the Xboxes in two rooms, but The Wife is impressed with a mail merge. Anyway, it took about an hour and saved her at least a weekend. I say +2 Charisma for me this week. :)

coldacid
December 02, 2008 18:32
Very appropriate and timely post and a great presentation. My wife did the cards from Sears along with photos and the price was slightly higher than the example given here.

They had created a word file that was formatted correctly for printing an address onto an envelope.

They had this file duplicated about 3000 times with a different address typed into each one.

Timothy Lee Russell
December 02, 2008 21:55
Ten or twelve years ago I set up a simple Access database, one table for names and addresses, a query to drive a label report and the report. I use 2" x 4" labels which allows me to include a holiday graphic on the label. I spend a few minutes each year updating addresses and changing out the graphic.

This year we are going with a custom photo card from Costco. In fact that is one of the tasks for today.

It's fun to apply programming skills to real world problems like the yearly Christmas Card.

My wife is a Word expert - and Mail Merge is one of her "skills" - but she couldn't write a line of code.

I read your blog regularly and I think your technical content is great.

I have to say though, I really think you overuse cutsie expressions like "The Wife", "Wife Acceptance Factor", etc. It's funny once or twice, but using the same cutsie trite expressions again and again just dilutes the impact. Yeah, the first or second time it's catchy to call her "the" wife, and to put both words in caps but it just gets old fast. It becomes a joke - it's like when I listen to your podcasts (again, I listen for the interesting technical content) and I count the number of times you repeat things like "syntactic sugar" and it just gets ridiculous. It's kind of like the old uncle or grandparent who squeezes the kids cheeks and tells the same lame story time after time after time - people eventually just roll their eyes.

You've adopted more of these silly things over time, and you use them more frequently as time goes on.

I guess my message is - stick with the stuff you communicate best in a no nonsense fashion - the solid technical content.

Scott Hanselman
December 04, 2008 8:24
Scott I think it's someone who's trying to get under your skin :) - typical Troll (no link, fake name). Says a lot about you that you didn't delete his comment - I would have. Crap through and through.

Rob Conery
December 04, 2008 9:02
Tim - I appreciate your feedback and I'll give it some thought. Thanks for taking the time to leave one!

Scott Hanselman
December 05, 2008 1:19
I think "Tim" forgets that most of us here are spouses before we're computer programmers.

"The Wife" is always a nice addition to a technical story since most of us can relate to being the household computer guru with a not-so-tech-savvy spouse. (not that I'm a guru - but I'm just sayin')

HB
December 06, 2008 3:42
Yeah, it's funny how doing the little, easy things (like mail merge) impress people more then anything else. But people like tech best when it makes their lives easier, so it makes sense. I've done the mail merge thing for family many a time, and it never fails to impress.

@ Tim, I personally like the "human" element of Scott's blog. Most tech blogs, especially programming-centric ones, can be so dry and boring.

Nick B
December 07, 2008 9:16
Maybe it's just me, but I always found "the wife" an unimpressive form of address. No name, not even endearment, just a classification. I personally say "my wife" or her name (watching bloggers is interesting, Scoble says his wife's name for example).

This isn't meant as criticism, just minor fascination. To me when I hear it it wounds like the car, the bus, the wife, the dog, the kids. Nothing special. It always seems more special and personal when someone says "my car", "my 3-year old", "my dog Barney", "my schnauzer". I wonder if it's cultural or regional.