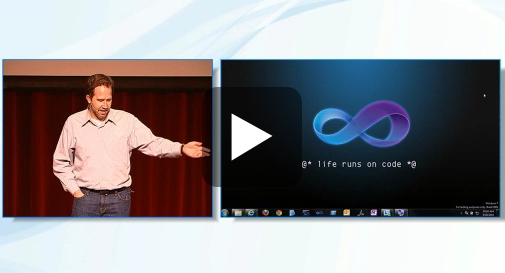 There aren't enough funny developer talks in my opinion. Lots of you folks are so funny in person and when I got to conferences or just have lunch we laugh and laugh. As with all niches or cliques, we're all part of a little club of inside jokes and shared stories.

It's always weird to get lots of comments on my technical talks. Many are positive, but sometimes I'll get one like "your not funy!" or "stop joking and start coding." Well, I realize my brand of edutainment isn't for everyone.

That said, this talk is happily content-free. If you hate my jokes, you may ignore it. ;)

Many years ago I did some local open mics and stand up, although I've never really put together a tight hour of material. I'm less of a stand up and more of a storyteller. Anyway, I got signed up for a talk in Holland last week called "Coding 4 Fun" but didn't prepare anything. I was already signed up for 6 other talks and had already presented 3 times by the time I showed up on stage at the 7pm "geek night" session.

There were a bunch of people there almost an hour early so I just sat on the end of the stage and we chatted. It was great fun. Next thing we knew, the guy was recording the video and the room was filling up.

So, I talked and told stories and chatted my co-workers and friends on IM for a while, the showed some community built NuGet packages. The only think I wish is that you could see the audience in this video. They were fun and engaged and silly.

Big thanks to Glenn Block and Clemens Vasters for sitting in the front row and playing along, and to Damian Edwards, Tim Heuer and Phil Haack for being silly over IM.

A lot of the jokes are in the IM or the code, so if you can't see them (even though I zoom in) with smooth streaming, download a higher res version so you can see them.

I hope you enjoy. Maybe one day I will put together a real act of "stand up for developers."

Maybe one day I will put together a real act of "stand up for developers."

Mathieu Roseboom
May 05, 2011 20:48
If you can make the Belgians smile you should have an easy time in the rest of the world.

Guillaume Lecomte
May 05, 2011 22:42
I'm not sure what the point of this talk was. It was mis-characterized as Standup when it's a .NET talk. I did enjoy some of the info regarding internal MS politics and project management. I thought the tools were ok and there were a couple WTF moments (this doesn't need to be MVC but it is and you think that's cool? Who writes in javascript anymore?). Was thinking about linking it to our engineering intranet...over an hour later it was clear that it was just something to listen to in the background...if I couldn't listen to anything else and had no books handy, as there is little to learn from the demos and focuses on some disparate high level technologies. - .02

Jack9
May 05, 2011 22:57
Hey Scott,
Love when you are doing jokes during demos! they make them very fun to watch + there is always something to learn.

Scott Hanselman
May 06, 2011 0:31
"Your not funny" - those people don't understand grammar OR humor. Looking forward to this; if it's anything like your MIX talk on the web stack of love, I'm sure I'll be laughing out loud (and getting stared at from people in other cubes)...

Daniel J. Summers
May 06, 2011 2:49
When do you go on tour? This talk was hilarious and informative, I wish all tutorials and conferences were this entertaining.

Danny Lloyd
May 06, 2011 7:01
I attended the devdays and attended the keynote and the Nuget session. I missed this session unfortunately but downloaded it last Wednesday or so from channel9. viewed it Wednesday and really liked it. it was fun. lmao at the 'no pants on?' part and the Lync. and the fastforward MVC scaffolding.

Eric Walker
May 06, 2011 7:32
I think it's great that this got posted online.
I was there, after a full day of sessions, and it was good to just have some fun and not to have to take notes for a session or two, which is kind of the point of Geek Night. If you are looking for very informative videos, look elsewhere. If you're looking for some developer fun, this is your video.

Jonathan van de veen
May 06, 2011 7:55
@chrissie => this was in Holland, a lot more easy crowd than Belgian's. I'm belgian and have presented these TechDays events.

This is seriously good, but it's not serious. I do value your

Even watching it on a WP7 on the train, it still is a good laugh (and some weird looks from fellow passengers)

commenter
May 06, 2011 22:34
i remember the video presentation of asp.net 4.0 where you started your lecture with some very funny jokes
the one about some employees getting released and losing thier job during the process of introducing new technologies [VS2010] talking about the guy who comes in the VS2008 installing process
that one was hilarious

Ahmed Banafa
May 21, 2011 17:20
man! that was an awesome full hour of scott's edutainement! I had a great time watching this. I also showed it to some of my friends who also found it awesome. Don't pay attention to the grim devs who have no sense of humor :P keep it rockin' ;)

Abdelmoumen BOUABDALLAH
August 22, 2011 22:56
I started following you because of yout podcasts and you sound like a very serious man when in "radio mode". However, in "TV" mode you are is really entertaining.
It's like Dr Jekyll and Mr Hyde.
Maybe you could add a bit of a spice to your podcast :)

Do you have any plans in doing TechDays/DevDays in China?

I enjoyed the Web Camps 2-day event you and James Senior hosted in Beijing last May, very much.

Dapeng
September 10, 2011 22:58
Couldn't play on my WinXP media player, don't have your latest whizbang codec. I laughed and laughed.

Scott Hanselman
September 24, 2011 10:23
Are you planning to visit Prague sometimes in the future?