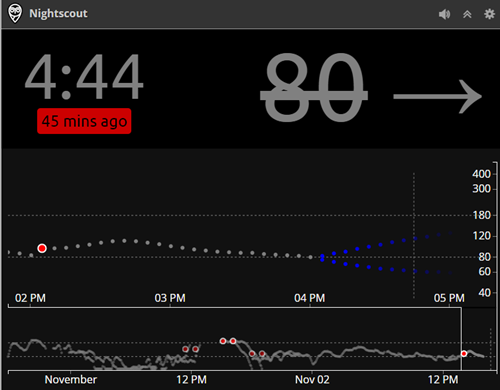 NOTE: This is a technical post, I'll blog more about Nightscout later this week. Subscribe and watch for my take, or visit http://www.nightscout.info.

I'm running an application called Nightscout that is a node app with a MongoDB backend that presents a JSON endpoint for a diabetic's blood sugar data. I use my Dexcom G4 CGM (Continuous Glucose Meter) connected with a micro-USB OTG cable to an Android phone. An Android app bridges the device and POSTs up to the website.

Azure is well suited to run an app like this for a few reasons. Node works great on Azure, MongoLabs is setup in the Azure Store and has a free sandbox, Azure supports WebSockets, and *.azurewebsites.net has a wildcard SSL cert, so I could force SSL.

So my goal here is to do two things, make sure Websockets/socket.io is enabled in my app because it's been using polling, and force my app to use SSL.

Setting up a node.js site on Azure is very easy. You can see a 3 minute video on how to do a Git Deploy of a node app here. Azure will see that there's a app.js or server.js and do the right thing.

However, because IIS and node are working together to host the site (IIS hands off to node using a thing called, wait for it, iisnode) you should be aware of the interactions.

There's a default web.config that will be created with any node app, but if you want to custom stuff like rewrites, or websockets, you should make a custom web.config. First, you'll need to start from the web.config that Azure creates.

Let's explore this web.config so we understand what's it's doing so we can enable Websockets in my app. Also, note that even though our project has this web.config in our source repository, the app still works on node locally or hosts like Heroku because it's ignored outside Azure/IIS.

Next, turn on Websockets support for your Azure Website from the configure tab within the Azure Portal:

Now I need to make sure the node app that is using socket.io is actually asking for Websockets. I did this work on my fork of the app.

It turns out the original author only put in one option for socket.io to try. I personally prefer to give it the whole list for maximum compatibility, but in this case, we clearly need Websockets first. When will Websockets fall back if it's unavailable? What Azure website pricing plans support WebSockets?

You'll usually want to use SSL when using Websockets if you can, especially if you are behind a proxy as some aggressive proxies will strip out headers they don't know, like the Upgrade header as you switch from HTTP to Websockets.

However, even free Azure websites support SSL under the *.azurewebsites.net domain, so doing development or running a small site like this one gets free SSL.

I can force it by adding this rule to my web.config, under <system.webServer>/<rewrite>/<rules/>:

Note the pattern in this case is specific to azurewebsites.net, and will take any Azure website on the default domain and force SSL. You can change this for your domain if you ike, of course, assuming you have an SSL cert. It's a nice feature though, and a helpful improvement for our diabetes app.

I can confirm using F12 tools that we switched to WebSockets and SSL nicely.

The whole operation took about 15 minutes and was a nice compatible change. I hope this helps you out if you're putting node.js apps on Azure like I am!

Sponsor: Big thanks to Aspose for sponsoring the feed this week! Working with Files? Aspose.Total for .NET has all the APIs you need to create, manipulate and convert Microsoft Office documents and many other formats in your applications. Start a free trial today.

Comment on this post [13]
Share on Twitter or Facebook or use the Permalink
November 03, 2014 12:20
Very useful, but I am already doing this. Yes the turning off websocket and turning it on from azure, did took quite a research when I was about to implement it. Now this blog post would be best place to refer it.

Raise an issue / Suggest a Feature
Fork the Code, change it, then do a "pull request"

Nice that you found a simple settings change for a project relevant to you both personally and professionally though!

Scott Hanselman
November 04, 2014 17:29
Hi Scott! I was wondering if you still use LiveWriter to create your posts... and if yes, how you generate monthview, and other summary pages: do you do everything by hand, each time you create a new post?
Thanks.

Andrea
November 05, 2014 1:55
Maybe we need "Azure cookbook" book to have some ready to use scenarios like this

Sam
November 06, 2014 0:47
Can you define azure Standard vm? On azure price calculator
http://azure.microsoft.com/en-us/pricing/calculator/?scenario=full
they show an A0 for 15 a month under the Standard tab. So for 15 a month can have unlimited web socket connections?

Randall
November 07, 2014 0:58
Oh, the both the free and shared tiers come with web sockets? They should update the pricing details page to reflect that. How many sockets does the shared tier come with?

Andrew Johnson
November 08, 2014 16:16
Great Post Scott.
It was really helpful in explaining how node and IIS interact and why you need to disable websockets for IIS even though you are using websockets.

Thomas Henson
November 13, 2014 8:03
I think these should be compiled for easy reference

joseph
November 17, 2014 23:24
@AndrewJohnson "unlimited" means as much as the server vm can handle.. you'll probably start to fall down somewhere between 500-5000 (depending on how much is actually being done beyond just handling an open connection). A larger instance should be able to handle around 50-100k connections per cpu with minimal overhead (basically hello world type of application. Realistically, you should consider 5k-10k connections per host CPU to be a realistic goal for real-world applications with moderate overhead with Node.js, though you will likely encounter other issues (max http connections to host default, and other max open connections/file handles type issues) before CPU load really becomes an issue.

Michael J. Ryan
November 19, 2014 11:03
Thanks for great article! I have issue when using your way with my site.
-Before apply your web.config, i can connect without https, no issue with CORS here
-After apply web.config, CORS issue is come.

Can u check again on it sir?

Type 1 for 35 years. A1C is currently 5.6, so I am "guessing" pretty well. Was wondering if you knew of any of the pump companies who may be thinking of integrating a fitness tracker inside of a pump? We already have these things on us 24 hours a day.