A few years back I picked up an Xbox MN-740 Wireless Bridge to make my original Xbox wireless-enabled. It worked great.

Recently I did a network audit for our home and realized that we were running WEP for security. It was probably set this way when I upgraded us to FIOS. I switched the Router over to the more secure WPA.

Aside: I encourage you to switch over to WPA as well. Apparently WEP can be cracked in minutes with free tools. Also, hide your SSID.

I then went to each of the networked devices in the house and switched their security over to WPA, including the Nintendo Wii. Nearly all appliances with Wireless built-in have WPA support now (although this wasn't the case two years ago.) Everything worked, and I didn't give it a second thought.

This evening The Wife said that her ReplayTV wasn't updating its TV Guide. It's currently connected to the MN-740 and I'd forgotten to update it...when I went to set it up, I realized that this device doesn't support WPA. Lame.

I did some Googling and it turns out that the MN-740 is a dead product. However, the hardware is the same as a D-Link 108AG Gaming Adapter.

If you're comfortable taking the chance that you might brick your adapter and you absolutely void the warranty, you can do a one-way (that means, non-reversible) flash of the MN-740 with some hacking.

You then need to run the Update, and while it's up, but before you hit "next" you overwrite some files using the alternate firmware. Again, you may brick your device, and you're breaking the EULA. You're on your own. 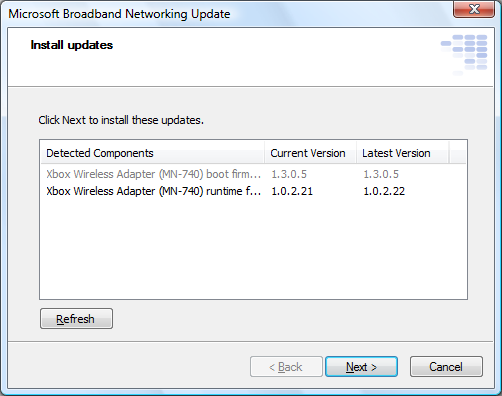 This apparently works by changing a manifest file and telling the updater that there's a newer firmware. If it works, hook up a network cable and hit http://192.168.0.1 with admin, no password.

If it worked, you'll get the D-Link Web Administration interface, and you can select WPA as a security option.

Last disclaimer. I'm just reporting the news here. You're on your own if you choose to do this. There is absolutely no reason to except if you need WPA security on this wireless bridge.

I was hunting all weekend for an old school X-Box wireless adapter just because didn't have the right terms to Google for.

So I just caved and bought a 360 instead, ouch.

nexusprime
June 18, 2007 21:18
Don't hide your SSID. It doesn't really provide any extra security. It may keep your low-tech neighbor from stealing your bandwidth, but WPA is going to do that and also keep out everyone else. If you have a good enough key.

Andy - But hiding the SSID makes me feel less discoverable.