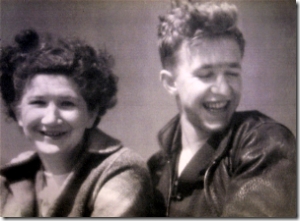 That's my Grandma at 19 on the Oregon Coast circa 1935. That fellow on the right isn't me, it's my Grandpa, whom I never knew. On day, maybe seven years before this picture she saw my Grandfather walking down the halls of her middle school and whispered to her lifelong friend "I'm going to marry that fellow John Hanselman." 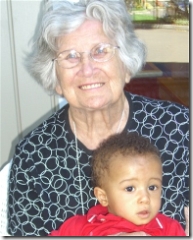 And she did. They had three kids, my dad being the baby. Grandpa passed when my dad was 11 and Grandma was left to raise the kids alone, in the 50s and 60s when it wasn't fashionable to be a single mom. It certainly wasn't easy then, and I'm sure it still isn't.

Grandma Jean is the only Grandparent I've really known.

Grandma always apologizes (unnecessarily) for not being "a dainty grandmother type." She always says "I don't bake pies. I'm sorry, I just don't." But she did, and does, call my on my B.S. and tells me her opinion, pretty or not.

Grandma is kind. She's starting to lose her memory, but just the short term. She can tell you all the exquisite details of the Beach Trip in 1935, but can't quite remember if she saw you last week, or the week  before. But she is kind.

I know she is kind because sometimes when old folks start to fade away, who they really are comes out. Mean folks get really mean, and bitter folks become cruel. Not Grandma. She's what we call a "straight shooter."

Grandma has always believed in a kindness to all folks of all types. It's hard to understand after reading her father's (my great-grandfather) memoirs of his trip to the U.S. from Scotland. He was an unfortunate racist who essentially landed on the shores of this country as an immigrant, spun on his heals and announced "get out of my country" to whoever followed. Grandma would have none of this.

Grandma was nearly suspended in the 1920s for dancing with a Black kid - someone she was apparently quite taken with at the time - and sent to the Principal's Office. Grandma was a beard (female friend) for a Gay man in a lifelong committed relationship at company parties so he could keep his job in the 1950s and 60s. Grandma is neither liberal nor conservative, revolutionary nor reactionary, she just has what she terms "Common Sense and Common Courtesy." While visiting some family friends in Georgia, as I understand it, someone used the N-word over dinner, and Grandma quietly got up, left, and hasn't spoken to them since.

Grandma has welcomed my wife and her family into her family with grace and understanding without a word about color or culture She dotes on her great-grand-children and today, on her birthday, Grandma Jean met her latest great-grand-child, Isabel Jean.

Grandma was born in Portland, traveled the world in her later years with her eldest sister working as her sister's nurse, and returned to Portland where she is the benevolent matriarch over a brood of many grandkids and enough Great-Grand-Children to fill two hands. She is worldly and local, thoughtful and accessible, kind and irreverent.

And we aspire to be more like her. Happy 91st Birthday Grandma Jean Hanselman. Here's to many more while, as you say, Grandma, "I'm still having fun."

Robert Scoble
February 26, 2007 12:07
We should all aspire to be more like her and abide by "Common Sense and Common Courtesy". The world would be such a wonderful place!

gloubidou
February 26, 2007 13:50
As someone who's lived in Georgia most of my life and frequently frustrated by the attitudes here, two thumbs up for Grandma Jean! Congrats for having such a wonderful woman as your Grandmother.

Mike Schinkel
February 26, 2007 15:02
Well, it's worth noting that neither I nor my Grandma has any problem with the state of Georgia as a whole. :)

Phillip
February 26, 2007 19:41
Congratulations to your Grandma on her birthday! Thanks for sharing. Mine just turned 90 last October and I bet she has a good 10 years left in her as she's an old farmgirl that just keeps going. :)

I wish more people had that these days. :)

thanks for posting that Scott. Reminds me what I missed out on by not really knowing my grandparents (they were in the UK, I was in NZ), tho I had a few VERY good people in their place - one who I "inherited" when I married my wife, who is now 101.

And, happy birthday to her!!

jack
February 26, 2007 23:52
I think Grandma took all her grandkids for a fast ride in that Chevy Nova. I clearly recall how much she enjoyed those strait stretches out on the island! What fun!

Matt
February 27, 2007 6:34
I've loved "Auntie Jean" (after whom I was named) since I was a small child in the 1940's - and I still love her. We have shared many laughs and many tears ... and frequent visits over the years in Portland, in New York, in Maui, and here in Marin County California. She may have been my Mom's "little sister", but to me she has always been a fun aunt, a willing explorer, a confidant, a shoulder to cry on, and a great friend. I've always been sorry that I live so far away from her, but rejoice with the rest of the Lawson-Cormack Clan that you have been and are able to live near her - and that you grandchildren, great-grandchildren, nieces, nephews, and of course grown up "children" have been able to benefit from her good humor and learn from her experiences and wisdom. She is loyalty personified - and a treasure whom I love and admire.

Give Auntie Jean a hug and 91st birthday kiss from Jeannie

BTW You may look like your Grandfather -- but you are surely your Grandmothers grandson!!!

Chrissy
March 03, 2007 12:19
I just have to say that your grandma looks remarkably like mine. It's just uncanny, really.