If you check out my blog archives or check out the Remote Work category you'll see that I'm always tinkering with my remote work situation. I'm the most interested in high quality and pervasive video. I'm so interested in this that for a while I was running a 10 hour a day persistent "Portal" between Portland and Seattle. I still highly recommend this for co-located teams that have the bandwidth to burn. It's great to be able to turn one's head and see their teammate right there by their side - even though they are 200 miles away.

I recently picked up a pair of Logitech BCC950 Conference Cams as a possible replacement for the very expensive "RoundTables" that some rooms at Microsoft have. The RoundTables are lovely but they are becoming scarce at the office and the Logitech is literally one-tenth the price. I'll blog a full and detailed review of the BCC950 later on this week but for now my biggest issue was that the Video Kiosk software I was using was starting to show its age. It's flaky and unreliable and build on the Office Communicator 2007 interfaces while I've been on Lync 2010 for a while.

Additionally, the researchers that wrote the software are always adding features I don't need for hardware I don't have. My remote buddy Damian Edwards and I decided we needed to make a software break.

We want these simple features to start:

Tonight I sat down and did the first three of these and put it on GitHub. I call it - wait for it - the Lync 2012 Super Simple Auto Answer Video Kiosk with Full Screen since the name "SmartGlass" was already taken. ;)

I searched ALL over to find out if there was SOME sample code out there that would just auto-answer a call from Lync and start video. I could find dozens of samples that made calls, that started chats, but none that would answer and auto-start video. You'd think this would be the FIRST thing that folks would want to do. I can only assume it's not a setting for security reasons.

Now, it's late and there's likely problems so pull requests are welcome if I have done something stupid. Lync is complex and while you'd think there'd be an "AutoAnswer = true" it's actually a more complex API than that. I started from this MSDN article on "Responding to a Lync Conversation Invitation."

You watch for a Conversation to start and see if it's an Audio/Video on. If it is, then we call our InitiateAVStream method. You can't do all this stuff synchronously as Lync is full of async native COM APIs and events that you need to respond to. Here we accept the video which lets us see who called us but doesn't yet start OUR video. Remember "we" are the dumb Kiosk who is receiving a call from me.

See how they are chaining handlers? I think this code could be made cleaner with a series of nested closures like above in the ConversationAdded example, but then again, maybe not. It'll get four deep before we're done.

Now the call is being connected but perhaps not yet. When its state changes the VideoChannel has opened up and we watch for the video to be received.

As the video starts up, I can see if the system is ready for the Kiosk to start its video. If so, we call BeginStart (and the SDK says we HAVE to call EndStart, so watch out!).

I'm pretty frustrated as while this is SUPER powerful, it's also SUPER complex for basic scenarios in my opinion. I think there's an opportunity here for a small layer on top of Lync that handles the 80% cases like the small Lync Abstraction  layer introduced in this "ScreenPop" example application.

The Goodness - The WPF Controls

At this point in the code I had everything working in a Console Application. You can go cherry-pick that commit if you want just a Console app that Auto-Answers video calls from Lync.

Even though I NEED to stop as I've got it working in a Console and I should be sleeping I noticed this in Visual Studio and it was too epic to not try.

You know how it is. It's 2am, you're done with your goals. OF COURSE you're going to try to convert your Console App to a GUI before bed. Of course.

Turns out there's a MESS of visual controls that you can put into existing applications to make them Lync-ified in literally minutes. 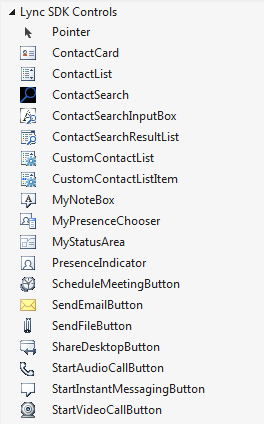 Ok, awesome. I took the basic UI and added a checkbox for "Auto Answer." 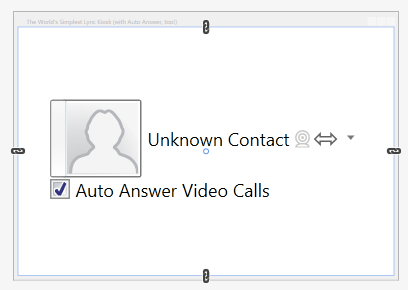 (ASIDE: You DO realize that the outline of the "unknown face" in Lync there looks an AWFUL lot like Bill Gates' legendary 1977 mug shot, right? I just noticed that.)

Anyway, then I made two settings, one for my "sip" address (that's in my app.config file as "sipEmailAddress" and one boolean for AutoAnswer. The complete XAML is just:

I also added a 3x transform to scale ALL these default controls so they'd look good on the 42" TV that is sitting in my office. Because they are native WPF vector controls they just scale perfectly to high resolutions without raster jaggies.

Then I added a call to make the app Maximized by default: 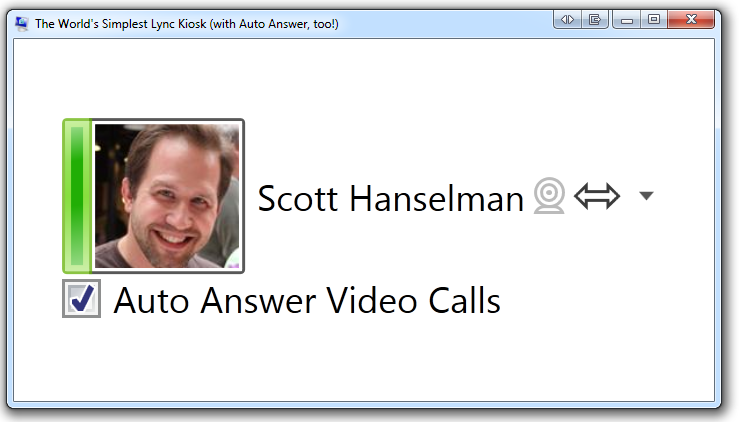 And when I call it automatically answers. Looks like everyone's asleep and they've turned the lights out! Ah, I but I wish it was full screen so the people in Redmond don't need to do anything or touch anything...

Some nights you're programming and you say "may God have mercy on my soul for this line of code."

I can auto-answer calls but sometimes the window isn't in front and once it gets in front there's no programmatic way to tell Lync to go Fullscreen with video.

Two bad problems there. Both solved by breaking all the rules. I get the Window Class with a big assumption that the Kiosk only as one chat window open and then I "push" F5 which is the Lync hotkey for fullscreen video.

Those last two, of course, are calls directly into Win32 from .NET:

But, it works! It's scandalous that this isn't built into the Lync SDK. Developers who are fans of Lync or who work on it all the time will say that my attempt at a "poor man's Kiosk" is silly and that I really want to use "UI Suppression in Lync" and just make an app that hosts Lync rather than automates Lync. They are likely right. However, frankly, it looked super-hard and I was tired. So, ya. If anyone wants to work on the Kiosk with me to make it simple answer and start video and do it all without showing Lync, that'd be awesome.

I also want to make a special nod to the InputSimulator library. It's amazing and it just works. It's WAY WAY better than SendKeys which you should stop using NOW.

The Windows Input Simulator provides a simple .NET (C#) interface to simulate Keyboard or Mouse input using the Win32 SendInput method. All of the Interop is done for you and there's a simple programming model for sending multiple keystrokes.

When the lights come on can you let us know how easy it is to read what someone is drawing on your whiteboard and also what the audio quality is like at either end? (i.e. is the BCC950 better audio than the old crisp rustling Cisco Umi)

Ari Kalish
July 03, 2012 20:48
On the remote machine where this app runs, do you have the machine auto-login with an account other than your account? I saw ESP Cart #7 in one of the screenshots so I'm assuming that is the name on an account you got created just for this purpose? Probably an account with zero permissions?

Scott Hanselman
July 05, 2012 7:22
Either your GitHub project is incorrectly named or the blog article name is. One says Lync 2012 and the other says Lync 2010. Yep, I'm THAT guy apparently.

Peter
July 11, 2012 18:24
Scott, This is neat. Can Auto answer be configured to accept multiple parties without a lobby, so you create a "Virtual Room" that anyone can go to (or on white list), chat to each other and look around at the same time ? I have been seeking a way to create this, just for regularly scheduled team meetings with a geographically dispersed group. The web cam could be dropped for this, or just be a conversation point on the weather from the roof, while waiting for the rest of the team.

Matthew Kirkman
July 12, 2012 17:57
Matthew - Sure, look at the code. You could make a whitelist and participants and check the list before you answer.

I'd be happy to help. I don't know anything about coding Lync, but am willing to give it a try and fumble around learning it. I love to try new projects outside my realm (e.g. awhile ago I coded a web service that allowed FoxPro, don't ask why, to consume it and create Outlook task, emails, and appointments, and then update them/delete/etc. Never did Outlook programming before in C# and it was interesting to say the least. Let me know if you still want help.

I remember reading one of your blog posts about a reference to a .net library which was on nuget to enable 2 way communication through firewall/proxy and it requred you to have part of it hosted outside the corporate and home network which you solved using Windows Azure.

Do you recall what this .net libaray was? :) I keep searching your posts but can't find it.

Your console tester is perfectly adequate for this.

Strange issue though - Up and Down only works if done at least once physically. Before that, the software has no effect.

Lee
May 01, 2013 8:42
Ensuring the conversation window is full screen should be as follows rather than interfacing with the Native Win32 API:
http://msdn.microsoft.com/en-us/library/lync/jj275437.aspx

Scott Hanselman
July 16, 2013 4:26
Does anyone know how to use the ShowFullScreen for a StartVideoCallButton control for WPF?

Now that Lync 2013 is available on Android. Do you know if it would be possible to create some form of autoanswer for that client? If so, then it will enable a super easy solution for "low budget video rooms" using the MK602 device from Rikomagic http://store.cloudsto.com/android-mini-pc-s/rikomagic-magic-box-mk602-detail.html that runs the Lync 2013 client with some AutoAnswer feature/service.

Yes, I know that Lync 2013 is not yet available on PAD version of Android, but the Phone edition APK works just fine also on PAD's (including the MK602 device).

Lidvar Kornberg
October 07, 2013 7:48
Hi Scott,
How can I auto accept "Unmute" event? It's mean:
In a conversation, when participant A select "Unmute" participant B, B will be display a notification "A prensenter wants you to unmute yourself."
So I want to auto accept this event without click anything.
Please help me.
Thank you very much.