Remember last week when I mentioned the Microsoft Web Platform Installer? It's an bootstrapper that gets you setup for free web development, all in a single application. It'll setup IIS7, get you Visual Studio, SQL Server, .NET, etc. Cool. And there was much rejoicing (except XP folks, sorry.)

What does it do? Well, how about a screenshot. 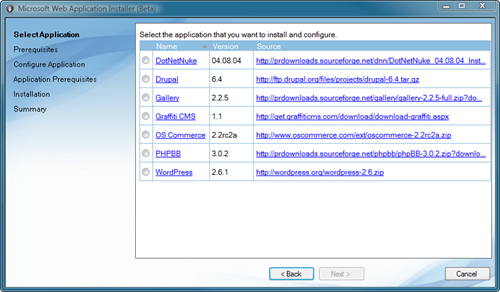 Yes, that's Drupal in there. And PHPBB. And WordPress. Sweet.

I've talked to the team, and they've promised that DasBlog is next in line to get in that list o' applications. It's a *ahem* gem of an application. Well, it's a great start. Open Source, baby, baby.

The installer knows about prerequisites, although the app can't currently install them for you. However, it'll point you to all the correct places to get what you need. 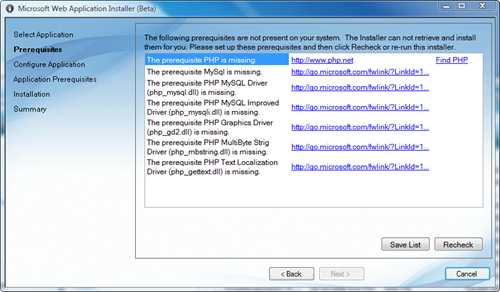 When you've satisfied the prerequisites, it'll setup IIS for you, prompt you for application-specific configuration and you're up and running. It'll also validate the configuration so you'll know ahead of time if the app will work. 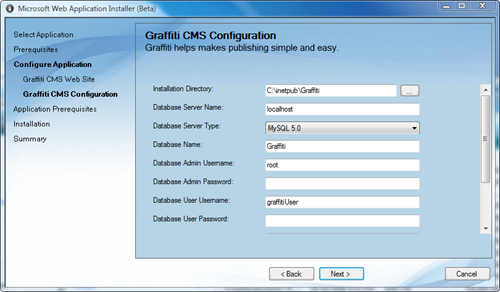 There are people at Microsoft do care about Open Source. I'm telling you guys and gals, we're turning this ship around. Slowly, but we are.

Oh, by the way, the Web Application Installer uses and ships ICSharpCode.SharpZipLib, which is GPL'ed Open Source. It has an exception, however:

Which is legal Open Source license speak for "link on, brother, link on." There you go, Microsoft ships an app with a mostly GPL'ed library. Madness. Cats and Dogs, living together, mass hysteria!

Go check them out:

Niels Hartvig
October 17, 2008 12:18
Yesss. @Trokel: I'm agree. Is it possible to create our own application installation?
I think it is. All you need is to compress your application files and then upload it but should we observe any standard in order to make our application compatible with Microsoft Application Installer?

Silverlight Travel
October 17, 2008 13:38
Package Management from Microsoft. At last. I've waited for this moment for years.

Florim Maxhuni
October 17, 2008 16:29
Vista only is NOT good enough, the truth is Vista does NOT work and many peopel including myself have had to revert back to XP, which in my opinion is a far superior OS. Microsoft should stop trying to enforce people to adopt sotware versions which poeple are not willing to embrace, it's should be a natural and gradual progression towards adopting teh technology, not a forced and aggressive approach.

Stephen
October 17, 2008 16:47
I would imagine the "Vista or Server" only is more related to the prerequisite of IIS 7, rather than some push from Microsoft to get you to upgrade.
The configuration and extensibility of IIS 7 is much different than for IIS 6, which I'm betting these installers take advantage of.

Joshua Flanagan
October 17, 2008 17:50
Hey, this is at least a step in the right direction. Let's be happy that they're even thinking open source. Rome wasn't built in a day, nor will MS go completely open in a day.

All I can say is thank you to Scott, et al, for doing what they do.

Bryan Reynolds
October 17, 2008 20:10
I agree - great idea and a great help to all of the budding developers out there. Now, how do we get dashCommerce on the list of applications? Whose back do i have to scratch?

Christopher Cyvas
October 17, 2008 20:27
Actually Scott, I convinced to put Subtext in there in lieu of DasBlog. I told them about issues with DasBlog formatting hard-drives or some such.

Scott Hanselman
October 17, 2008 21:44
I agree with Torkel that there should be an easy way to deploy my web application using this tool. That would be fantastic!

It should also be easy for third parties, like Telerik, to make extensions for both Installers. I should be able to install the whole development stack, including 3rd party tools, from a file share. That really would take the process of setting up a new development station and make it fast and simple.

http://erudition.radianttiger.com/
October 17, 2008 23:30
You probably know this and may consider it's just nit-picking, but AFAIK Graffiti is not OSS. It looks from your post (and from others I have read) like everything listed there was Open Source, and it may confuse some users of your app.

I just managed to make a custom webinstaller that includes SQL Server Express with permissions and everything. This project looks great for Vista Deployment. I am definately going to try and migrate my setup to this!

Some of the packages are tar'd and System.IO.Compression does not support that yet. I was lucky enough to be on the team that wrote this and it was a great deal of fun and extremely flexible to add additonal apps.