We have some Chinese exchange students in town (a couple at my house actually). Some of the host families are finding that Chinese characters don’t display in IE – just boxes.

I did some searching for Chinese language packs for IE, but apparently I’m missing something. I can find packs for Office, and alternate versions of Windows itself – but where’s the magic download location so IE can display Chinese characters?

And while I have your attention in this matter – does anyone know of a good way to get US keyboards to enter Chinese characters? Or a virtual keyboard or something?

I personally don't think it's easy enough in Windows to add another keyboard and there's still a lot of confusion about language and "language packs" because of pre-Vista versions of Windows. Even now, there are aspects of Vista that make a non-English experience more than a little confusing.

To start with, I run Windows in English, but I'm told that there are some option updates (15 in fact!) and I'm continually (constantly?) reminded of it. I hope there won't be 945 updates in 10 years, all option, but I'll be reminded every day...

What 15 updates are these, you ask? Why Language Packs they are...specifically "MUIs."

There are two kinds of Language Packs for Vista:

Now, I'm no marketing guy, but I think MUIs (Moo-ies?) and LIPs are probably not very good names for these Language Packs and the differences are confusing.

The nutshell is that:

You can get LIPs (Language Interface Packs) at the Local Language Website.

Where it can get confusing is that these packs are for localizing the interface. Showing the interface (output) is a different problem than inputting in another language. And all this is different from simply browsing in a foreign language.

Also, IE and other browsers are smart about fonts. This started around IE5, where you could visit a site in Chinese and IE would download the font automatically. Interesting, though, while you could see the Chinese inside the browser, if the <title> was also in Chinese, you'd see squares, because Windows didn't know enough about the font get render it in the Windows Title Bar.

When a language doesn't fit the English keyboard, there is usually a method - or many methods - to input the language. Windows includes IMEs or Input Method Editors for this purpose. I talked about the Ethiopian Amharic IME recently.

If you're running Vista, try this out. Go to the Control Panel and run the Regional and Language Options. Go to the Keyboards and Languages tab and click Change Keyboards. Notice the Installed Services tree view. This shows you the languages and keyboards you want available. 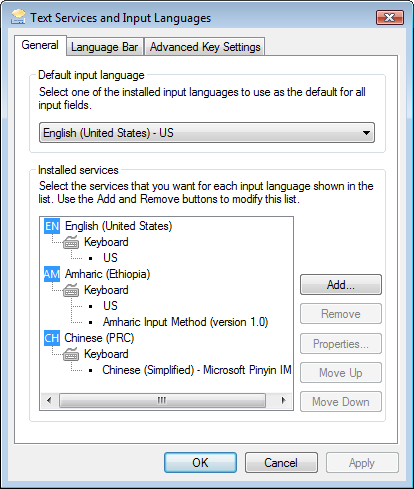 Make sure you click over to the Language Bar tab and make sure that Docked in the Taskbar or Floating on the Desktop is checked. You'll see your existing culture appear in the Language Bar - mine is in the tray.

An IME will appear when you start typing in the foreign language. The IME for Chinese, specifically "Microsoft Pinyin" has many options for entry, depending on your style.

The Japanese IME is really nice, especially on a Tablet PC, as you can draw the strokes you want with the pen or mouse and it will narrow down your choice of characters.

As Ethiopian Amharic is a syllabary kind of like Katakana in Japanese, to enter Amharic you type the English letters that sound like what you want, and you get a list of choices as seen in this screenshot: 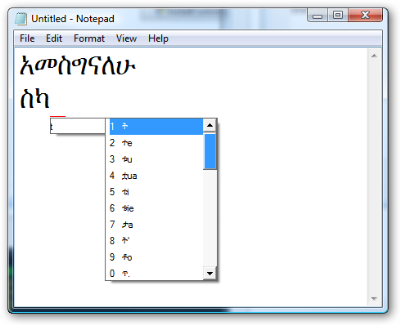 All of these IME's are available to you already in your current Vista installation. You just have to turn them on.

There's some confusing parts to this initially, but once it's setup, all you have to do is select the language from the Language Bar and it just works.

Graeme Bradbury
July 20, 2007 11:54
You can "Hide" these by right clicking them if I remember correctly. Not the most convenient feature or evident to those 95% of users, but maybe that's part of the idea. I think it would be less confusing if a single Update were advertised for "Alternative" language packs that installed those available that aren't your default language or region. So if you are set to Katakana the alternative pack would include English and the 14 languages listed in your Windows Update.

Then again, I've spent a total 45seconds thinking about this versus (I assume) days by someone in the know.

I mentally debated whether to even post this comment, and I know that you don't work for Microsoft, and you are not affiliated with them. Thank you very much for your post. I love your blog, I'm a regular reader, and this comment is not directed at you. That said, I was irritated enough that I just couldn't quite let it go. (maybe I need a vacation <g>)

I hate to comment bile, but I just have to say that it's really lame that you have to buy the "Ultimate" version of windows to get a feature that is more than 80% complete. Especially when we are talking not about some value-added entertainment option, but rather just to get language packs for an international product. Isn't that just saying "Here's the 80% finished version of Windows. If you want the really finished version, you've gotta pay extra."

Since 2000, I think that Microsoft has made some great strides in improving their image, and they did it the honest way -- by opening lines of comunication, genuinely listening to their customers, and acting on what they learned. That said, I think that their marketing of the Vista SKUs was a setback, and it's a real shame because Vista is a great product.
(and yes, I'm one of the 10 people to ante'd up for Ultimate in the name of enthusiast. I have animated wallpaper and complete MUIs, and it only cost an extra $200 woohoo!)

JM
July 20, 2007 16:14
JM - I agree with you. Please, don't mentally debate comments like this one...it's all about the conversation! I appreciate your comments and I agree that the Vista SKUs are silly and the Ultimate Extras are lame.

(Even if I did work for Microsoft I would still think that and it'd still be a good for you to post the comment! Thanks for reading!)

Peter Ritchie
July 21, 2007 8:18
Just in case, someone is having problems rendering Hindi (Devnagri) script, I have a post describing a problem I had and it's solution here.

Vaibhav
July 22, 2007 16:57
Seems like you got a bit excited over MUIs and LIPs (which weren't needed to solve the problem in the email), making the whole post look confusing - luckily you summarised :)

Worth adding that if you have the tablet feature of Vista enabled, once you add Chinese (either Trad or Simp) to your language list in the control panel, you can change the language on the TIP to CH and proceed to write in chinese and it'll recognise it from there too, which is easier to use than the IME Pad when you're writing sentences.

Sam
July 22, 2007 17:11
Sorry you found it confusing. Sure, excited is a fair enough statement...I wrote the post to (attempt) to demystify a poorly advertised goodness about Windows. Rather than just solving the question(s) in the email, I figured "teach a man to fish..."