My stark realization that I may be an early adopter Scandal. It seems I may be what the literati call an "Early Adopter." These are folks who tend to buy gadgets and widgetry before they are fully accepted by the rank-and-file.

Now, I'm only 31, but there's a great article at PCWorld called "The 50 Greatest Gadgets of the Past 50 Years." I don't have full coverage of the timespan, but I was around 62% of this time so I thought it'd be interesting to see which gadgets I actually purchased early on versus when they were widely adopted. (In other words, if you JUST bought Tivo this Christmas, you're likely not an early adopter in the purist sense.) This list only includes the items that I have owned. If you want the full list, it's up at PCWorld.

3. (Tie) ReplayTV RTV2001 and TiVo HDR110 (1999) - Much respect to PCWorld for giving props to ReplayTV. I've still got my RTV2001 and two other ReplayTV 4050s running along side the Media Center PC and the Motorola HD-PVR wanna-be from Comcast. The Replay still kicks the llama's ass, and here's a tip if you've got a Replay 4000 or 5000 series...check out http://www.poopli.com and prepare to be amazed.

4. PalmPilot 1000 (1996) - Oh yes, big time. This is actually still in my kitchen junk drawer and still boots up. Such a brilliant device. I still miss GlucoPilot, my diabetes management application. I've been exploring getting its source released to the OS community, but there's not a lot of Palm-devs who are also diabetic that would be interested in working on it.

7. Atari Video Computer System (1977) - It's a real shame that Z won't get to experience the wonder that we did when we first cobbled together a crappy Zenith 17" TV with a crappy Radio Shack RF Modulator and tuned to channel 3. Things were never the same. Maybe the Flashback2 will be a good replacement. The Flashback1 was pretty lame.

9. M-Systems DiskOnKey (2000) - I had a 16MB DiskOnKey and loved it. It worked on Windows 2000 without drivers, and it was the fact it didn't need drivers that really make it shine. I just gave my niece a 128MB USB Key that she'll be using in Tanzania to move files from work to home. Ah, sneakernet!

14. BlackBerry 850 Wireless Handheld (1998) - I freaking loved this device. I remember using it at TechEdorPDC in 1999(?) to talk to back to the office. While the current BlackBerry's are more phone like, I always had a fondness for this smaller pager form-factor.

16. Texas Instruments Speak & Spell (1978) - True story, I bought one of these just this summer from a garage sale for my Mother-in-Law to take back with her to Zimbabwe. She has taught at Mguza Primary School outside Bulawayo for over 20 years. Now, in 2005, she'll use a Speak & Spell "computer" to teach spelling to the kids.

18. Diamond Multimedia Rio PMP300 (1998) - I've still got my Rio around somewhere. The Rio totally paved the way the current glut of small AA-battery powered MP3 generic players, and to this day, still has one of the nicer user interfaces.

22. Hamilton Pulsar [LED Watch] (1972) - Growing up my dad had a few simple rules. Chief among them were, you WILL be able to drive a manual transmission car, and you WILL be able to read an analog clock. So, when the "LED Watch Club" started in my school around 1980, I was in a mad rush to learn how to read a clock so I could get one of these watches. Not exactly early adopter, but come on, I was 8.

26. Nintendo Game Boy (1989) - Of course. I've got this one also in the kitchen drawer. It's amazing how bad the screen is when compared to a Playstation Portable. One thing I will say though, I'm very much NOT a fan of the kids these days walking around tethered to their game boys. If you're 11, you don't need a pacifier, even if it is a digital one. Head up, young man!

27. Commodore 64 (1982) - I still have two Commodores along with all my games. I loaned them to Michael Church who (one day) will copy them all to .ROM files so I can use the Win64 emulator to play them. I remember entering programs in HEX with the CRC codes at the end of the line from "Compute!" magazine. I use to pay my little brother to read the code to me.

28. Apple Newton MessagePad (1994) - I sold Don Box a Newton MessagePad on opening day at my night-job selling computers at Incredible Universe. I also took notes in C class using my Newton MessagePad along with Steven Frank, now an award-winning Mac developer at Panic. I loved this device. It just killed me to sell it on eBay, but there's only so much room for handheld stuff with screens, buttons and batteries. The AA usage on this thing was out of control.

31. iRobot Roomba Intelligent Floorvac (2002) - I still use my Roomba at least a few times a month, but more recently we've been using a Dyson for the downstairs. The Roomba cleans the upstairs with aplomb and even avoids the ledge near the stairs. I've got the original, and have replaced the battery once. I'd love to get the Roomba Discovery, but I can't justify it if the original is working fine.

33. Franklin Rolodex Electronics REX PC Companion (1997) - This was so clever because it fit in the notebook's PC Card (PCMCIA at the time) slot. This was before USB, so the PC Card slot was the only thing folks could count on. I picked up one of these, but ended up using the PalmPilot due to the lame (non-existent) input methods on the REX.

36. Iomega Zip Drive (1995) - I'm currently using the Rev Drive, a distant descendant of the Zip, but my brother still uses his (my) Zip Drive faithfully for backups. I never got into the whole Zip250/750 and Jaz thing and always found those products to be very sad. The Zip kicked butt though, especially when you're daisy-chaining your Zip to your Printer through your PaperPort Scanner all on the Parallel Port. Man, why did we think the Parallel Port was a good place to shove things back in to the computer? Exit only, people, I don't swing that way.

38. Milton Bradley Simon (1978) - Seriously, who didn't get one of these? This is like the most garagesaled item ever.

40. Connectix QuickCam (1994) - I loved this little 160x160 grayscale baby. It was such a clever design. I recently purchased a QuickCam Express for $3.99 at Goodwill. It's still the best webcam out there, dollar for dollar, IMHO.

45. Sony Mavica MVC-FD5 (1997) - Personally, I thought the Mavica was going to single handedly save the beleaguered floppy disk. This was a brilliant idea, of course, that is before Memory Card came out and crushed the Mavica's spirit. However, this did, IMHO, open the doors for the "direct to DVD" video recorders that are out there now. Too bad they insist on lossy MPEGing the content. 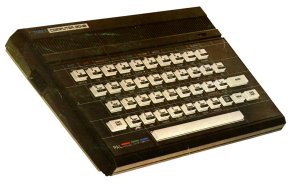 47. Timex/Sinclair 1000 (1982) - This machine was completely useless, but it was only cheap, so it was a no brainer. Couldn't afford the 16K upgraded RAM, so I was chillin' with 1K and the internal BASIC interpreter.

49. Jakks Pacific TV Games (2002) - I pulled out the Atari joystiq version of the Jakks games just this last week to entertain our guests from out of town. Plugs into the TV direct and runs of batteries. Brilliant.

Jeff Atwood
December 29, 2005 3:06
Also, on the parallel port-- I hated, hated HATED parallel port peripherals. But before USB became common around ~2000, it was the only option! Well, there's serial, but it sucked even more. No bandwidth t'all.

I remember getting my very first motherboard with USB support sometime in 1998. And it was one of the early Intel models where the USB was broken! Of course, there weren't any USB devices for me to use with it at the time anyway..

I think people forget how shitty things were for peripherals before USB, a mere ~7 years ago. Now you can take a steering wheel and use it on the PS2, Xbox 360, Mac, or PC. That's pretty darn amazing by 1998 standards.

I, too, fondly remember entering machine code bytes from the magazine. Earlier program listings used decimal numbers (000-255), and then they came out with the improved hexadecimal number entry system that you described.

Not quite as bad as flipping switches on a MITS Altair 8800, like Bill and Paul, but still unbelievably primative when compared to today's standards!

Jason F
December 29, 2005 5:27
I still have my Trash 80. My dad and I used to take turns entering basic code from a book we bought to play a game. I remember that the last 20 pages or so were all "DATA" lines with binary.

I'm sorry, but a true early adopter doesn't use words like "justify". :P

Kevin Dente
December 29, 2005 22:23
The Dyson kicks complete Ass. It's amazing. I got it at Costco and it consistantly picks up massive amounts of dust. It is made of plastic, but it's some kind of superplastic. I got the DC-14 full kit.

Scott Hanselman
December 29, 2005 23:10
I learned about computers when I had my C64. I used to train games (adding extra lives) and write intros for groups in assembly using an Export cartridge from England.

I use a Logitech 1000 laser mouse at home. Too bad its software work in Windows 2003.
I find it very comfortable and better than my Work's Microsoft wireless explorer 2.0. Anyone finds Microsoft's laser mouse too small? Why did they make it smaller than all their previous mice?

Abdu
December 30, 2005 0:00
How good is the iRobot Roomba? Saw these at Best Buy the other day and didn't know if they actually worked, or if they were just a novelty.

Sergio Pereira
January 04, 2006 16:21
Not only have I owned and used about a half dozen of these items, I have even gotten into the habit of giving them as gifts if I don't have an immediate need for myself (yes, sometimes it is easier explaining to the wife why the Razr would be a cool phone for her mom, rather than explain why I need to replace my Treo 650 which was a replacement for my Treo 600).

Now if only I could get my hands on an XBOX360 I would be set. Silly wife thought she could wait until the day it hit the stores to try and "find" one for christmas.

Joe Brinkman
January 11, 2006 16:16
Ahhhhh - this post brings back some sweet memories. I also remember typing in all that machine code - I remember the binary (how tedious was that) and the hex machine code which made life harder to type as the letters were awkward at first. However it gave me a kick start in learning to touch type.
I actually used the software on my amstradcpc464 - anyone remember those and the cool "romantic robot" tool for freezing games so you could hack the A register with more lives?