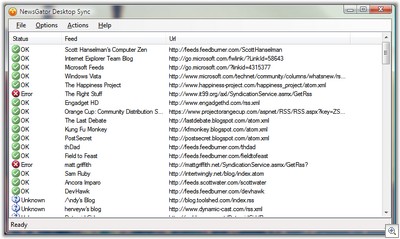 I just noticed this...NewsGator Desktop Sync Beta (download if you have IE7RC1/.NET 2.0 or VistaRC1 and a Newsgator Account.)

It's an applet that keeps the Common Feed Store and NewsGator Feed Store synchronized.

I haven't found a use/purpose for the Common Feed Store yet, but at least it's synchronized! Outlook 2007 will then synchronize that store with your PST version in outlook. That's a crapload of feeds in three places, eh?

It's beta, but it's cool of Newsgator to have a sync plan with what will likely become the defacto store for RSS feeds - the Microsoft Common Feed Store, even if it doesn't have a totally clear story for secure storage and retrieval of feeds yet.

One thing that is nice about the NewsGator Desktop Sync:

Personally I have a lot of trouble with NewsGator Online Sync. I run FeedDemon on three machines and often my feeds are randomly gray/disabled, or not grayed but stop updating, and sometimes, if rarely, disappear. I also find that the read state - the "what I've read and what I haven't" is out of sync a few times a week.

Comment on this post [6]
Share on Twitter or Facebook or use the Permalink
September 23, 2006 13:35
You need to use the feed store to add feeds to the RSS gadget in the sidebar. This is super-non-intuitive, as most things in Vista seem to be.

RichB
September 23, 2006 16:19
My big problem with the newsgator sync is that it once you've marked a post as read, it stays read even if it is updated by the publisher, which means you sometimes loose interesting stuff when someone updated a post to include new information and you never notice :(

Tomas Restrepo
September 23, 2006 17:19
also take a look at NewsGator go! a mobile client that can sync with your desktops

Ryan Cromwell
September 25, 2006 21:45
I've been looking for a perfect way to view my numerous feeds for quite some time, tried pretty much all the clients, online services and am currently stuck on http://www.newshutch.com/ Doubt I'll switch soon.

CypherBit
September 26, 2006 23:09
I have the same issue with FeedDemon and it drives me nuts. You can go into a burried dialog and resync your sync state but that's a bit of a hack.