Programmers, keep your wits about you and Code Mindfully 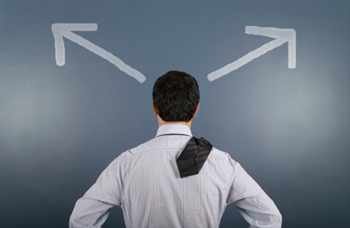 I was talking with Patrick Cauldwell the other day about what makes a "Good Developer." We talked about a number of different characteristics.

My intent was to write up a list of good personality characteristics that describe effective programmers, but Patrick said, "The real problem with most developers is that they don't keep their wits about themselves."

This was like a slap in the face to me. I realized when I was going through the Programmer Phases of Grief that I hadn't kept my wits about me.

You ever have the very frightening experience when you're driving along, perhaps lost in thought, and next thing you know, you've driven two miles and you don't remember the driving process that got you there?

Many of us who've been programming for a long time, or folks who are very gifted and take get from A to C while skipping B, can have these fugue states while programming. I don't literally mean that one blacks out while coding, but rather one goes "running down a one-way dead-end street." A lot of time is wasted before we realize that some original assumption was wrong.

I think one can be a more effective programmer if they can avoid not-thinking. Call it Mindful Coding if you will. The act of actually thinking while writing code is challenging, especially when your mind is jumping to the next idea or if you're writing code you've written a dozen times before.

Sometimes I'll catch myself asking a question of someone around here, and halfway though the question I'll realize that I haven't really THOUGHT about the problem space. For me, and my learning style, this might involve explaining it to someone (often my wife, who nods in all the right places, but cares not about such things) or drawing a picture.

For many, analytical thinking isn't a passive thing. Often just making the decision to "sleep on it" can be all that's needed to break through a hard problem.

"If you can keep your wits about you while all others are losing theirs, and blaming you. . . . The world will be yours and everything in it, what's more, you'll be a man, my son." - Rudyard Kipling

So, I say, programmers, keep your wits about you. Code Mindfully. I vow to try harder.

That being said, I wish I'd not spent an hour of my flight back from London on monday fighting a CSS/HTML combo that refused to show a background graphic when I spotted, 60mins and 10seconds later a missing semi-colon.
I'd already moved the CSS into and out of the html several times, linked to a static css, moved the files, recreated the virtual directory, tried several different jpegs and sworn at the machine several times.
At least I had nothing else to do but watch the movie I suppose!

Ian
April 04, 2007 5:49
Excellent post, Scott. I'd also suggest that "mindful coding" should include an awareness of what could go wrong with your code as you're writing it.

Nick Bradbury
April 04, 2007 6:42
I think one of the great strengths of pair programming is that it helps keep you from careening down blind alleys. Nothing like having another brain to smack you upside the head when the need arises.

Kevin Dente
April 04, 2007 7:40
I work as a consultant. My first project taught me a valuable lesson: things always go wrong, it's just a matter of degree. There is no sense in freaking out when something goes wrong because most of the time it isn't a real showstopper. After two years, it takes a lot more to make me "lose my wits" than it ever did before. I like to ask people about the times that things have gone wrong because those are the times where you really stand to learn something.

Brian
April 04, 2007 9:21
If you keep your wits around you while everyone else is losing theirs, you'll be the only one needing a haircut. Simser's rule.

Bil Simser
April 04, 2007 16:10
My wife is good at nodding in the right places. But over time, it does wear off. I caught her giving some basic tech support to her sister the other day. :)

I read a story a little while ago, but I can't remember the link. The basics of the story were... some CS department had a stuffed bear outside the door. If you wanted to ask the CS department a question, you had to explain it to the bear.

90%+ of the students had their problems solved by explaining it to the bear.

Moral of the story? If your wife isn't helpful, explain the problem to the bear. :)

Chris
April 04, 2007 17:53
I started reading this and the last thing I remembered reading was "The real problem with most developers...". The next thing I knew I was on "Code Mindfully"!!! NOOOOOOOOOOOOOOOOOO!!!!!

Matt Blodgett
April 04, 2007 20:03
I hate pair programming (can't stand having someone watching me flounder around on google while I try to remember where that code snippet was, or watching me browsing to one of my regular hourly distractions like this blog), but I do like the idea of getting up out of my cube and actually talking to a BSA or customer representative when I'm not sure what the requirements are.

For some that's as hard as pulling over to a gas station and asking for directions, but it's one of the best things you can do.

I hope you don't misquote your strings as badly as you misquote Kipling!

If you can keep your head when all about you are losing theirs and blaming it on you ... Yours is the Earth and everything that's in it, and - which is more - you'll be a Man my son!

Cliff Stanford
April 05, 2007 0:38
Cliff - Sorry, I guess I got Wikipedia'ed! I shouldn't trust the intraweb. Did you know that quote from memory?

Scott Hanselman
April 05, 2007 13:50
I agree with you Scott, but I still think that there could be "another layer of indirection".
What I mean is, there are some things that developers shouldn't have to think about as long as the architects have thought about them already. Let the architects to the long hard thinking about which interfaces your classes inherit from. I don't belief that developers on a large project should be expected to go from the 10,000ft view to the 1ft view instantly and if you're on a smaller project then hopefully you don't have to fly as high as 10,000ft.
After all, developer context switches take time just like OS context switches take time.
However, within your flying zone, whether it be the 10,00ft zone or the 1ft zone, you do need to be aware of where you're going.

Nice redesign by the way. I like the clean, simple, Zen look.

Jonathan Parker
April 06, 2007 2:38
I agree with Kevin earlier. Pair programming is a great way to be mindful.

At the same time it's not easy. So it can be hard to do initially. But when you've got a good partner you can stay on focus and get higher quality code much more quickly.

Also, you do have to watch out for backseat driving in pair programming.

Bernard Farrell
April 06, 2007 13:28
Very interesting observation about the driving proces - I was like "hey, that's exactly how I feel at times while driving on the highway". Burried in thoughts about transactional object graphs, LINQ to SQL entity caching or what not - waking up after 10 miles can be an interesting experience.

One thing I have learned over time: As an architect / lead developer I face problems that are really hard to solve. Some of these problems are so complex that I may spend days figuring out a solution. Pitching the problem against other architects is often useful and is an important step in problem solving.

However, when you find yourself lost - out of options (i.e. google didn't help, your wife went shopping or your colleagues left for lunch), parking the problem for a few days actually makes it every time.

The good ol' saying "let's sleep on it" really works every time (atleast for me).

The only problem is that as the complexity of the problems increase, you keep finding yourself shouting "I'll never figure this out". And so history repeats itself ..

Anders Borum
April 06, 2007 18:12
The is the wonderful thing about TDD (Test Driven Development). One does not have to remember everything all the time, and keep 3 days of work in your head. With TDD you can inch pebble your way forward, pushing and pulling the design and implementation with executable examples (aka tests). In my opinion TDD is a great way to stay in flow, and avoid the wandering mind syndrome that hits all programmers.

Chris Sells
April 10, 2007 22:07
My problem has often been over-thinking and not getting anywhere. Kinda like getting into the car knowing exactly where I want to go, but sitting in my driveway for 30 minutes determining which of two routes to take. In the end, the time saved by taking the "shorter" route was only about 5 minutes.

Tod Birdsall
April 13, 2007 21:12
Its called "using a legal pad and a mechanical pencil" before you start writing code..get it right on paper first, then code. It makes life much easier and you waste less time writing code. Also, you wind up with something that works well.