Scoble (BTW, thanks for the mention) asks Do GPS's work for you? Heck ya. I love me some GPS. We did an article on hooking up to the Streets and Trips (Pharos) GPS with .NET based on EdJez and Kzu's original code.

I talked about GPS's and Geotagging in a podcast earlier this year after Patrick Cauldwell, a geocaching phenom, got me thinking about getting involved in geocaching as a hobby. Portland, where I am, is near where the very first geocache was placed - it's huge here in Oregon.

Once you're GPS-enabled, everything gets more interesting. Photos gain a new dimension if you GPS-tag them.

I researched the crap out of GPSs. The TomTom GO 910 is well thought of, particularly in Europe. It's got a 20gig hard drive with the USA, Canada and Europe installed. It's meant to be installed in your car(s) - not carried around. It's rather thick, bigger that I wanted. I also couldn't find it for less than about $790.

The Garmin Nuvi is similar to the Tom Tom. However, it's thin. It's about the size and thickness of a deck of cards, except about an extra .5" tall. it's quite thin, and the antenna (the foldy thing in the picture) folds flush. No attachments, no wires except power. It has an internal lithium battery. It pops right off the suction mount using the button at the bottom.

Like the Tom Tom it also plays MP3s, shows JPEGs, and hooks up directly to Audible. The Audible feature is nicely integrated - it will pause the book for a moment, speak the directions, then start up again having backed up a few seconds so you don't lose your place.

It also supports waypoints and POIs (Points of Interest) from 3rd party providers. Great for preparing a geocaching trip. (There's also lists of Red-Light Cameras you can load in) You tell it if you're in a car or walking (or in a cab, etc) and it gives directions based on that info. The Windows software is pretty sweet too. The Nuvi has an SD Card slot (same as my camera, yay!) and also shows up as a disk drive when plugged in using a standard USB cable. The software automatically updates the firmware and maps over the net when it's connected.

It also has a nice two-way language translator available and comes with sample data. You select/build sentences by filling in nouns and verbs on the touch screen for common questions: Where is the _____? and it translates and speaks the translation. Slick. 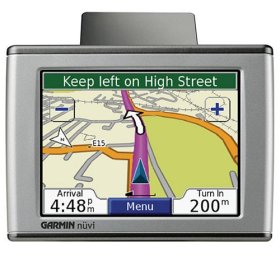 Let me say the TTS (Text to Speech) voices are great. There's many to choose from. I use the Australian chick, she sounds the most natural. The Nuvi speaks the street names, you'll hear "Turn left on Murray Road..." and let me tell you, it makes a difference versus "TURN! Now!"

Here's some reviews of the Garmin Nuvi 350 GPS.

This thing retails for $900+ at Best Buy and other places, but you can get it for as low as $600 if you look closely.  It's $620 at Amazon right now. I expect the price on this to drop at least another $200 as Garmin starts to upsell the Garmin Nuvi 360 GPS. The only difference is that the 360 has Bluetooth Phone Support.

As much as I'd like Bluetooth, I really need to stop talking on the phone. I picked my Nuvi 350 up at the local Best Buy using a combination approach of a "12% of any single item" along with a price-match I forced on them from the Froogle. It CAN be found for around (or under?) $600.

The WAF (Wife Acceptance Factor) on this is huge. Mo isn't much for directions, counting mostly on monuments. There's been a few times where she got lost, drove home to get me, and had me drive her somewhere. Not being able to get somewhere is very helpless, and while Mo's not big on gadgets, she loves this GPS. The directions are clear, the touch screen is easy to use. Our favorite feature is the "Food near here." We recently had breakfast at the wonderful Sanborn's and never would have found it if we hadn't "asked."

Seriously, Robert, I've done the Streets and Trips "have the wife hold the laptop" thing. It really doesn't work unless you want to mount your TabletPC to your dashboard vents. Mappoint 2006 tried to get turn-by-turn directions right, but barely achieved a late-90s level of mediocrity. Bless them for trying, but Mappoint is a kick-ass geodatamining tool. However, it's directions are poo.

A dedicated, installed GPS is such a joy. They change one's life in a small, but measurable way like only two other devices have thus far - the iPod and the DVR.

Now, the real question, how will Scott Bellware afford a Nuvi?

Scott Bellware
July 22, 2006 4:22
I definitely agree that a GPS has changed my life. I get places faster, explore new cities without worrying about how I'll get back or what will happen if I get lost, can normally find my way out of bad traffic and best of all can finally stop trying to print out 10 pages of directions for road-trips :)

Leo Nelson
July 22, 2006 8:19
Scott, have you seen my brother's experiment? He slapped a computer running XP on his motorcycle, added in GPS with Streets and Trips and some other stuff he found at MP3Car.com, and rode it all the way from San Diego to the Arctic Circle. GPS worked great for him, and the whole GPS / computer setup cost a lot less than many of these GPS only units do.

Added bonus is that he's blogging the whole trip via cell phone internet connection - something you can't do on a GPS only deal.

His blog's here: http://www.carotidbattery.com
He was recently featured on On10: http://www.on10.net/Blogs/TheShow/3919/

I use S&T 2k6 and the small, bundled USB GPS all the time to navigate myself when I'm travelling. It works well, but you do have to do some set up (start and end points, turn on navigation mode, turn up the volume for the voice navigation directions, etc) before you start driving. I set the laptop in the passenger's seat with the screen facing me, use the voice prompts, and occasionally glance over to it when I approach stop lights.

I have absolutely no doubt that a well-designed dedicated device would do a better job. But I always have my laptop with me when I'm travelling, and S&T 2k6 is good enough to get the job done.

Jeff Atwood
July 22, 2006 18:03
GPS has certainly come a long ways. I remember using it in the first Gulf war to plot mine locations in the Persian Gulf. Unfortunately, the satelite network was not completely deployed at the time so it was possible to have periods of blackout. Trust me, the last place you want to be is in the middle of a minefield and have your GPS crap out. Since then I have had navigation systems in my last two cars and could not imagine buying another car without one. Even for day to day driving it is awesome. Last night my wife and I were driving to a relatives house in the country. We ran into two road closures and were able to quickly navigate around the closures using the built in Nav system.

Joe Brinkman
July 22, 2006 21:10
I have Microsoft Streets and Trips 2006 With GPS Locator. Of course, I have my big ass laptop in my car to use it. Not the best, but if you have a 5-year-old laptop and you're not really using it, just by spending $100, you got yourself a GPS. It has its weirdness once in a while, but man this GPS changed my life. I just moved from California to Washington state, so GPS is a must to have as I have no idea around the area.

There was a time when my wife and I had to go to DMV to get a driver's license for Washington. We had everything we needed except for cash. So I quickly fired up my laptop and looked for the closest Bank of America ATM. We were able to go get cash without asking anyone local. It was great!

Microsoft Streets and Trips 2006 with GPS is not the best, but it certainly changed our life. We are not afraid to explore where we never went to because it will always navigate us back home. It rocks!

Geocaching is a great hobby. I was looking for something for us all (wife and 4 kids ages 2-8) to do outside and in nature. Geocaching is the ticket! We've been doing it now for 3 years and we all still enjoy the outing...even the kids. When we travel its always something for us to do outside the hotel and find out new things about the area. Some of the caches that you can find are also great history lessons on the area and things that you would never have realized even after living somewhere for 10 years.