First, a disclaimer. Don't do this. I did this to test a theory and to prove a point. ASP.NET Core and the .NET Core that it runs on are open source and run pretty much anywhere. I wanted to see if I could run an ASP.NET Core site on GoDaddy's cheapest hosting ($3, although it scales to $8) that basically supports only PHP. It's not a full Linux VM. It's locked-down and limited. You don't have root. You are missing most tools you'd expect you'd have.

I wanted to see if I could get ASP.NET Core running on it anyway. Maybe if I do, they (and other inexpensive hosts) will talk to the .NET team, learn that ASP.NET Core is open source and could easily run on their existing infrastructure.

AGAIN: Don't do this. It's hacky. It's silly. But it's hella cool. IMHO. Also, big thanks to Tomas Weinfurt for his help!

First, I went to GoDaddy and signed up for their cheap hosting. Again, not a VM, but their shared one. I also registered supercheapaspnetsite.com as well. They use a cPanel-based web management system that doesn't really let you do anything. You can turn on SSH, do some PHP stuff, and generally poke around, but it's not exactly low-level.

First I ssh (shoosh!) in and see what I'm working with. I'm shooshing with Ubuntu on Windows 10 feature, that every developer should turn on. It's makes it really easy to work with Linux hosts if you're starting from Linux on Windows 10.

OK, looks like Red Hat, so CentOS 6 should be compatible.

I'm going to use .NET Core 2.1 (which is in preview now!) and get the SDK at https://www.microsoft.com/net/download/all and install it on my Windows machine where I will develop and build the app. I don't NEED to use Windows to do this, but it's the laptop I have and it's also nice to know I can build on Windows but target CentOS/RHEL6.

Next I'll make a new ASP.NET site with

and then I'll publish a self-contained version like this:

And those files will end up in a folder like \supercheapaspnetsite\bin\Debug\netcoreapp2.1\rhel.6-x64\publish\

NOTE: You may need to add the NuGet feed for the dailies for this .NET Core preview in order to get the RHEL6 runtime downloaded during this local publish.

Then I used WinSCP (or whatever FTP/SCP client you like, rsync, etc) to get the files over to the ~/www folder on your GoDaddy shared site. Then I

to make it executable. Now, from my ssh session at GoDaddy, let's try to run my app!

Of course it couldn't be that easy, right? .NET Core wants the unwind library (shared object) and it doesn't exist on this locked down system.

AND I don't have yum/apt/rpm or a way to install it right?

I need to crack open that rpm file and get the library. RPM packages are just headers on top of a CPIO archive, so I can apt-get install rpm2cpio from my local Ubuntu instances (on Windows 10). Then from /mnt/c/users/scott/Downloads (where I downloaded the file) I will extract it.

This part is cool. Even though I have these files, I don't have root or any way to "install" them. However I could either export/use the LD_LIBRARY_PATH environment variable to control how libraries get loaded OR I could put these files in $ORIGIN/netcoredeps. You can read more about Self Contained Linux Applications on .NET Core here.

The main executable of published .NET Core applications (which is the .NET Core host) has an RPATH property set to $ORIGIN/netcoredeps. That means that when Linux shared library loader is looking for shared libraries, it looks to this location before looking to default shared library locations. It is worth noting that the paths specified by the LD_LIBRARY_PATHenvironment variable or libraries specified by the LD_PRELOAD environment variable are still used before the RPATH property. So, in order to use local copies of the third-party libraries, developers need to create a directory named netcoredeps next to the main application executable and copy all the necessary dependencies into it.

At this point I've added a "netcoredeps" folder to my public folder, and then copied it (scp) over to GoDaddy. Let's run it again.

Ok, now it's complaining about ICU packages. These are for globalization. That is also mentioned in the self-contained-linux apps docs and there's a precompiled binary I could download. But there's options.

I like "opt-out" so I don't have to go dig these ups (although I could) so I can either set the CORECLR_GLOBAL_INVARIANT env var to 1, or I can add System.Globalization.Invariant = true to supercheapaspnetsite.runtimeconfig.json, which I'll do with just to be obnoxious. ;)

When I run it again I get another complained about libuv. Yet another shared library that isn't installed on this instance. I could  go get it and put it in netcoredeps OR since I'm using the .NET Core 2.1, I could try something new. There were some improvements made in .NET Core 2.1 around sockets and http performance. On the client side, these new managed libraries are written from the ground up in managed code using the new high-performance Span<T> and on the server-side I could use Kestrel's (Kestrel is the .NET Core webserver) experimental UseSockets() as they are starting to move that over.

In other words, I can bypass libuv usage entirely by changing my Program.cs to use the use UseSockets() like this.

Let's run it again. I'll add the ASPNETCORE_URLS environment variable and set it to a high port like 8080. Remember, I'm not admin so I can't use any port under 1024.

Ok, but I can't access it from supercheapaspnetsite.com:8080 because this is GoDaddy's locked down managed shared hosting. I can't just open a port or forward a port in their control panel.

But. They use Apache, and that has the .htaccess file!

Could I use mod_proxy and try this?

Looks like no, they haven't turned this on. Likely they don't want to proxy off to external domains, but it'd be nice if they allowed localhost. Bummer. So close.

Fine, I'll proxy the traffic myself. (Not perfect, but this is all a spike)

Cheesy, yes. Works for GET? Also, yes. This really is Apache's job, not ours, but kudos to Tomas for this evil idea.

Boom. How about another page at /about? Yes. 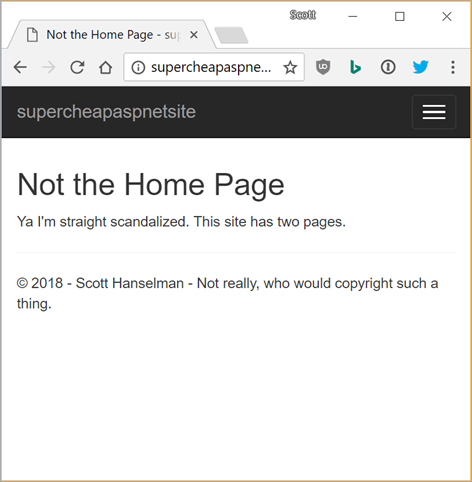 Lovely. But I had to run the app myself. I have no supervisor or process manager (again this is already handled by GoDaddy for PHP but I'm in unprivileged world.) Shooshing in and running it is a bad idea and not sustainable. (Well, this whole thing is not sustainable, but still.)

We could copy "screen" over and start it up and detach like use screen ./supercheapaspnet app, but again, if it crashes, no one will start it. We do have crontab, so for now, we'll launch the app on a schedule occasionally to do a health check and if needed, keep it running. Also added a few debugging tools in ~/bin:

All in all, not that hard. ASP.NET Core and .NET Core underneath it can run pretty much anywhere, just like PHP, Python, whatever.

If you're a host and you want to talk to someone at Microsoft about setting up ASP.NET Core shared hosting, email Sourabh.Shirhatti@microsoft.com and talk to them! If you are GoDaddy, I apologize, and you should also email. ;)

That PHP makes my eyes bleed.

Or a crontab @boot entry if user crontab is enabled.

Michael Brown
March 02, 2018 10:30
Checking your site to remind me how to install Bash on my a Win machine and I see this post. Funny, I need bash as I am working on a similar hack on AWS Lightsail for $5 a month. I'll let you know how it went.
Love this kind of staff!

Sam
March 02, 2018 13:41
As hacky as this is, it's worth pointing out that most sites on the internet can easily survive being hosted on a cheap host like this - at least as far as resources are concerned.

Put that $3 host behind a CDN (such as cloudflare) and the site could easily deal with a tonne of traffic.

Jason Henry
March 02, 2018 23:58
@sjw GoDaddy is a pretty notoriously awful webhost, so the fact that ASP.NET Core can run on it (even with some hacky bits) is impressive. I don't take this as Scott endorsing them, just proving a point.

Thai Phan
March 03, 2018 2:56
I am going to see if this will allow me to run a .net core app natively on my Synology DS1715+ (intel based). I know I can run in docker, but sometimes I want to whip up a console utility app with having to map volumes just to allow it to scan directories. The last time I tried, I recall getting that error about libunwind.so.8 or other shared libraries.

Phil Bolduc
March 03, 2018 16:07
Well done Scott. I was just to going to see if this was possible since their hosts are on sale for $1 per month. Googled it and of course Scott has already tackled it!

Dave VanderWekke
March 03, 2018 23:10
This is really cool!
What would be even cooler if it runs on Debian arm64 so I can implement the TeleCuris IoMT solution on a DragonBoard 820c with Azure IoT Edge modules (Docker containers).

Arman
March 09, 2018 21:02
I know it’s not your point, but their cheapest windows hosting costs the same and I’ve been running www.dev-list.com, an MVC 5 site for years on that.

Attila Szasz
March 13, 2018 0:40
To make this go, I get the feeling service providers need the smallest possible distro that can run ASP.NET core. An .iso that you can instantiate as a new VM or bare metal install. A sort of "least you could do" effort for hosting providers.