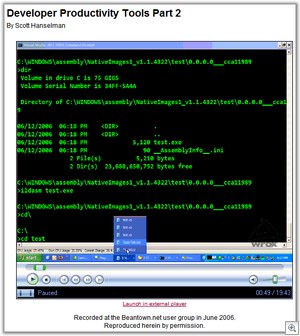 The complete presentation was around 1 hour 45 minutes, so for online, Jim has split it into 4 segments. This week's segment is #2 and is available now and is about 20 minutes long. If you watch it in your browser, I recommend you double click on Windows Media Player to make the video go full screen. You can also download the full video.

The remaining two segments for following weeks will cover roughly:

Jordan T
July 21, 2006 23:08
Hello, I was wondering if you could point me in a good direction to capture sound from a microphone, in C#, and I would like to send over a network stream. Did you try and capture sound in this example as well?

Any help is great,
Brad Patterson

Best would be to use DirectSound, I think.